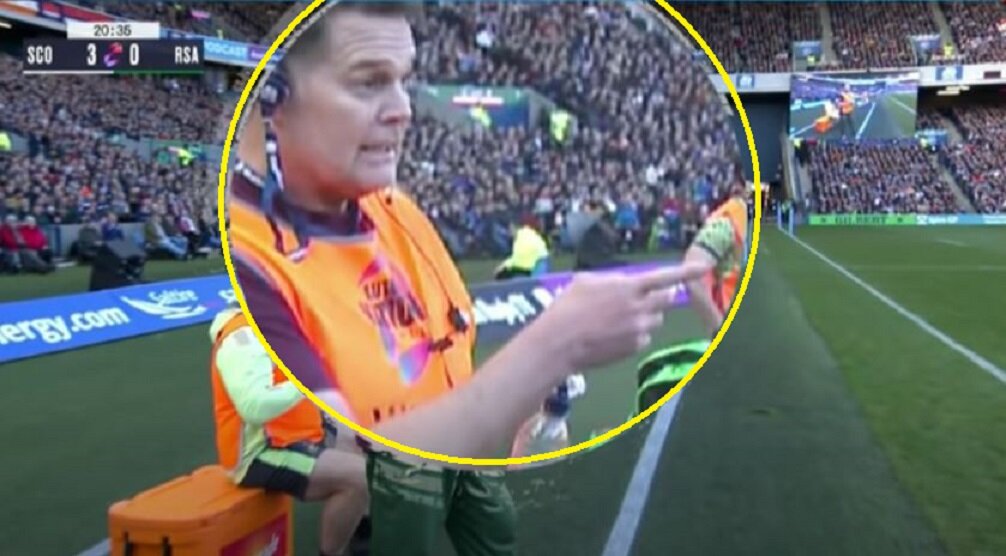 Rassie Erasmus is at it again and this time it’s more disturbing than ever before.
South African lip-reading expert Swys de Bruin was tasked with breaking down what Erasmus told Springboks fullback Wille Le Roux during the match against Scotland.

With his waterboy responsibilities against Scotland, Erasmus was as enthusiastic as ever on the touchline, and Swys picked out a memorable incident featuring Le Roux.

So, how is this not in breach of rules around communication on a rugby field? [Are there actually rules around this, we couldn’t be bothered Googling it. One to send on to the Investigation Unit maybe].

Supersport, who we love and respect, seem to be egging him on to do more of these mad-cap pranks.

To be fair, what he says to Willie Le Roux is pretty funny. Listen to the audio.

South Africa overcame Scotland 30-15 in the second match of the Castle Lager Outgoing Tour at Murrayfield on Saturday, with coach Jacques Nienaber and captain Siya Kolisi citing smart use of their point-scoring opportunities as one of the fundamental factors to success.

The triumph came after a win against Wales in their first match in Cardiff last week, and it will provide the team a boost of confidence as they prepare for their final match of the tour against England at Twickenham next week.

Nienaber said after the game: “We are fortunate to have two quality front rows, who work in tandem and the guys that started laid the foundation, which the replacements built on nicely when they took the field.”

“In the build-up to the match we said as a team that everyone thinks Scotland is a great attacking team, but they’ve actually been the best defensive team in the northern hemisphere in 2020 and 2021, as they conceded the least points in the Six Nations and the Autumn Internationals. So we always knew it was going to be tough to break them down.”