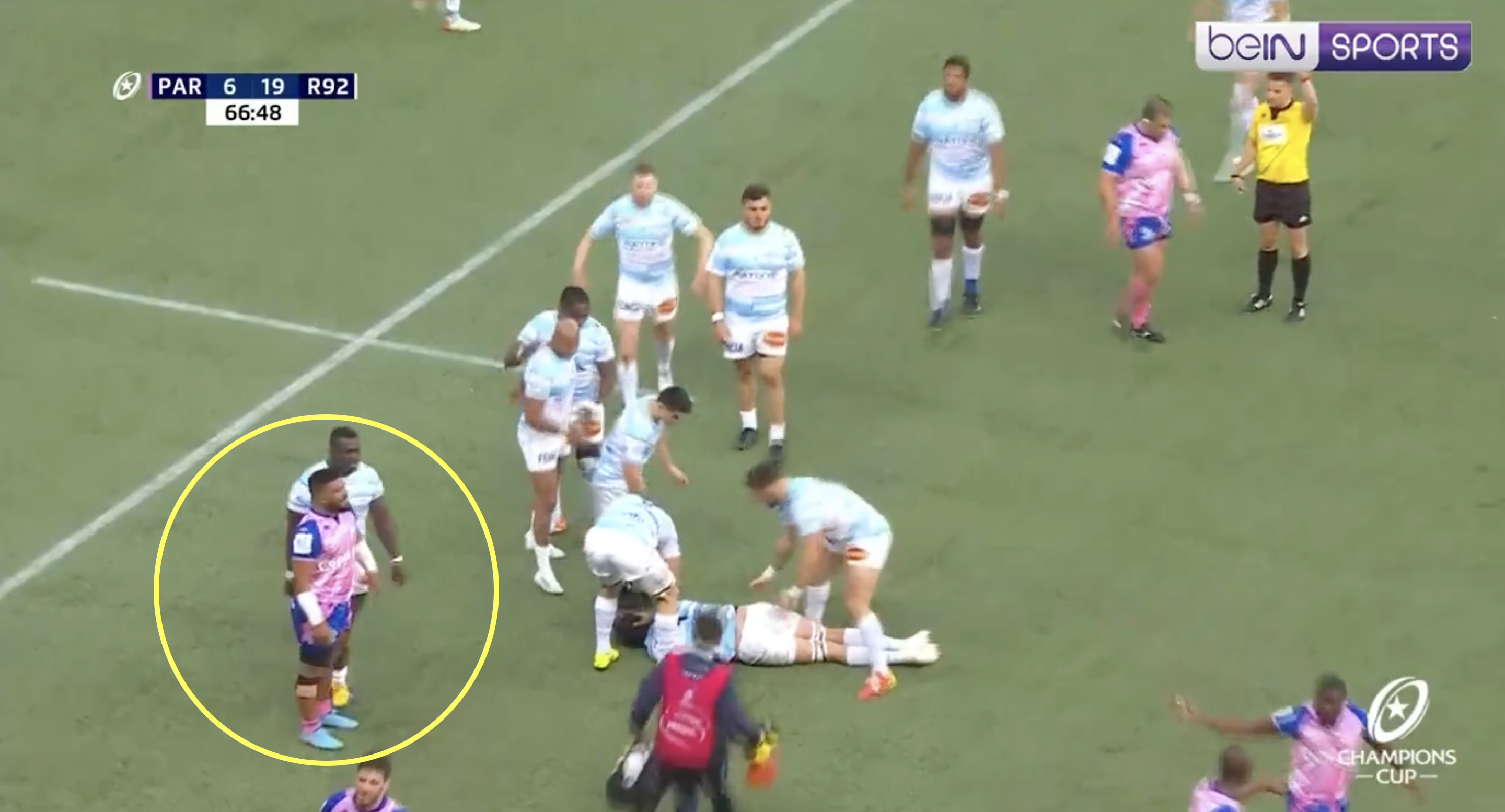 The Australia hooker was dismissed by Luke Pearce for taking out Baptiste Chouzenoux in the air, and it was a card that was certainly warranted.

But one thing that has been spotted by ‘Rucked Over’ on Twitter is the reaction of Latu’s teammates immediately after he clattered into Chouzenoux, particularly that of winger Lester Etien. Having already received six yellow cards and a red card going into the match at the Stade Jean Bouin, Latu’s teammates were probably wary of how much of a liability he is, and when he committed his red card offence, Etien was clearly furious. It is hard to blame the winger either, as the red not only put Stade Francais at a disadvantage in that match, but will not help going into the second leg this Sunday.

This was the decision following an EPCR hearing: “The Stade Francais Paris replacement hooker, Tolu Latu, has been suspended for 11 weeks following an independent Disciplinary Hearing by video conference today (Tuesday, 12 April) arising from his club’s Heineken Champions Cup, Round of 16 1st leg match against Racing 92 at Stade Jean Bouin.

“Latu was sent off by the referee, Luke Pearce (England), in the 67th minute of the match for making contact with the Racing 92 second row, Baptiste Chouzenoux, in the air in a dangerous manner in contravention of Law 9.17.

“Law 9.17 A player must not tackle, charge, pull, push or grasp an opponent whose feet are off the ground
Under World Rugby’s Sanctions for Foul Play, Law 9.17 carries the following sanction entry points – Low End: 4 weeks; Mid-range: 8 weeks; Top end: 12 to 52 weeks.

“The committee upheld the red decision, finding that Latu had committed an intentional act of foul play that warranted a red card. It then determined that the offending was at the top end of World Rugby’s sanctions and 12 weeks was selected as the appropriate entry point.

“The exact date when Latu will be free to play will be determined once his playing schedule can be clarified. Both he and EPCR have the right to appeal the decision.”

Take a look at the reaction from the Stade Francais players:

Stade Francais hooker Tolu Latu has received an 11 week ban for THIS horror hit in the air against Racing 92 at the weekend.

It was his 8th… YES 8TH card of the season (2 Reds/6 Yellows)pic.twitter.com/nisDhnySMm