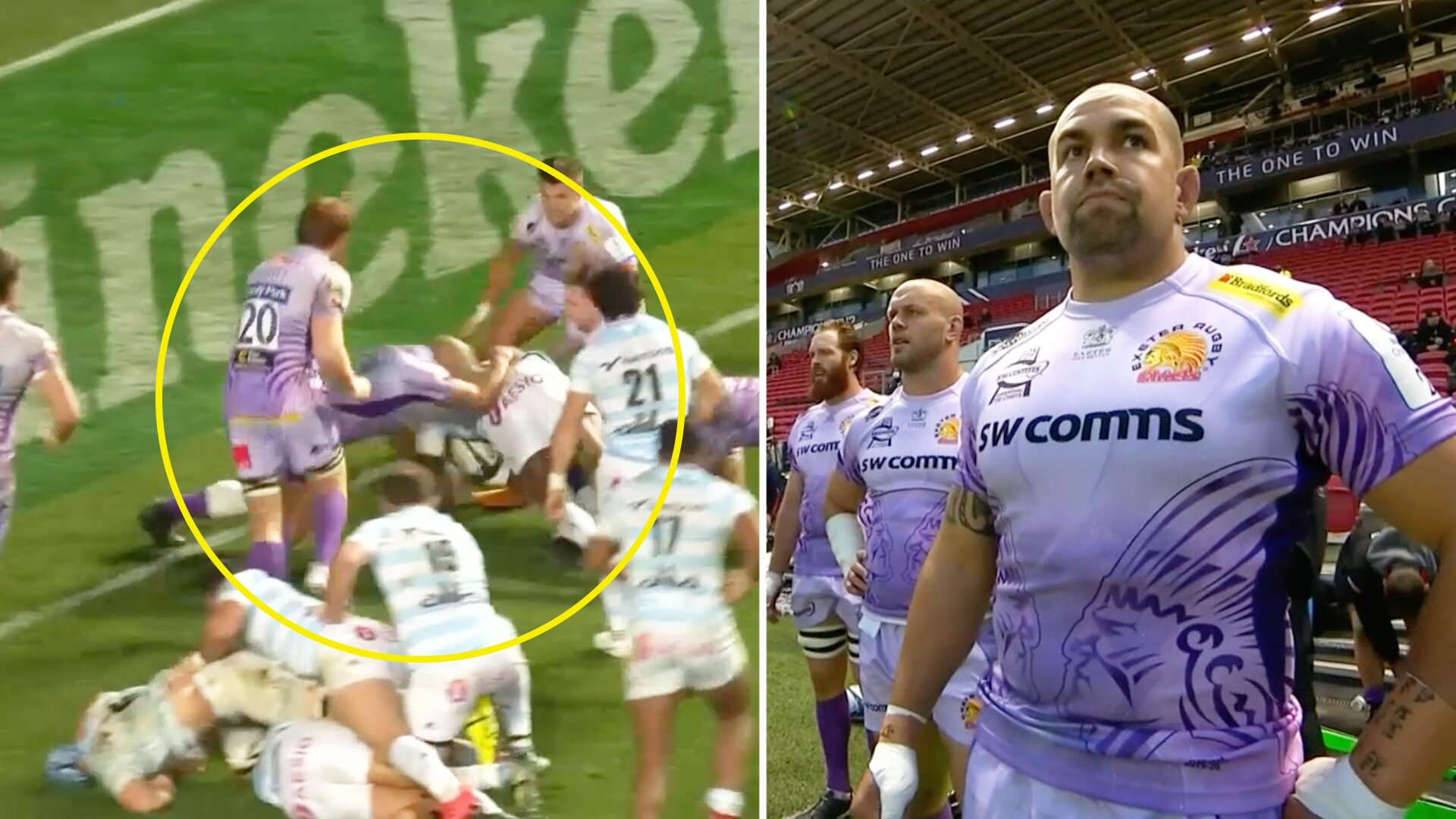 Not everyone would have noticed this pivotal Ben Moon moment from this weekend’s Champions Cup final between Exeter and Racing 92.

The 31-year-old prop was with Exeter when they were promoted up from the Championship into England’s top division and came off the bench last Saturday in the 55th minute of the final at Ashton Gate.

Replacement prop Tomas Francis was sin-binned late on in the clash leaving Exeter defending for their lives with just fourteen men and a slender one-point advantage with the scores at 28-27.

We watch as Racing throw phase after phase at the Exeter line but to no avail as the Chiefs pair up in a number of shuddering double hits.

In the second phase of the video, we watch as powerhouse French centre, Virimi Vakatawa, breaks through the first tackle and looks to scramble over the line from close range before Ben Moon puts in a powerful secondary hit to halt his charge. Watch the match-winning tackle below.

Ben Moon with a try saving tackle in the second phase and Jannes Kirsten with another vital stop in the last play in one of the greatest defensive sets you’ll ever see. pic.twitter.com/RD15PsIDJv

Few players have dominated the test scene in such comprehensive fashion in the space of just two tests like Caleb Clarke did against the Wallabies over the past week-and-a-bit.

🏃🏽🎥 PLAYER CAM | Drop what you are doing and check out the @skysportnz player cam of THAT run by Caleb Clarke.

An impressive cameo appearance off the bench in his test debut in Wellington was followed by a first start in international rugby in Auckland two days ago, and it was at Eden Park where the 21-year-old dynamo stamped his authority in the All Blacks jersey.

Playing a vital role in his side’s 27-7 victory in front of his home crowd, it was Clarke who was largely responsible for Australia’s 42 missed tackles, as he slipped out of 14 of them himself.

The two-test starlet did so through his immense ball-running power to shine the brightest out of all the stars who graced the field in the second Bledisloe Cup encounter of the year.

So good was Clarke that subsequent comparisons to Jonah Lomu and Julian Savea have since been drawn to the youngster in the wake of the carnage he left as the All Blacks resurrected their Bledisloe Cup hopes following their dismal 16-all draw a week beforehand.

It’s no surprise, then, that the man who wasn’t even supposed to be playing XVs this year as he eyed a place at the now-postponed Tokyo Olympics with the All Blacks Sevens squad has been rewarded with the Healthspan Elite Performance of the Week award by Crusaders halfback Bryn Hall.

Speaking on the Aotearoa Rugby Pod, Hall was in awe of Clarke’s efforts against the Wallabies, pinpointing the standing ovation he received as he was replaced by Damian McKenzie in the second half as a testament to his efforts.

“I thought Caleb Clarke was tremendous. Every time he touched the ball, he just looked threatening, and he was threatening,” Hall said.

“Over 100 metres, defenders beaten right, left and centre. I can’t imagine the last time someone got a standing ovation after a game like that, [while] that young, so I think the New Zealand public had a pretty good understanding about how special that performance was.”

“The biggest thing I liked about Caleb around that was, he was humble as well. Straight after his match, he had the press conference, and he’s just so level-headed and so mature for such a young kid.