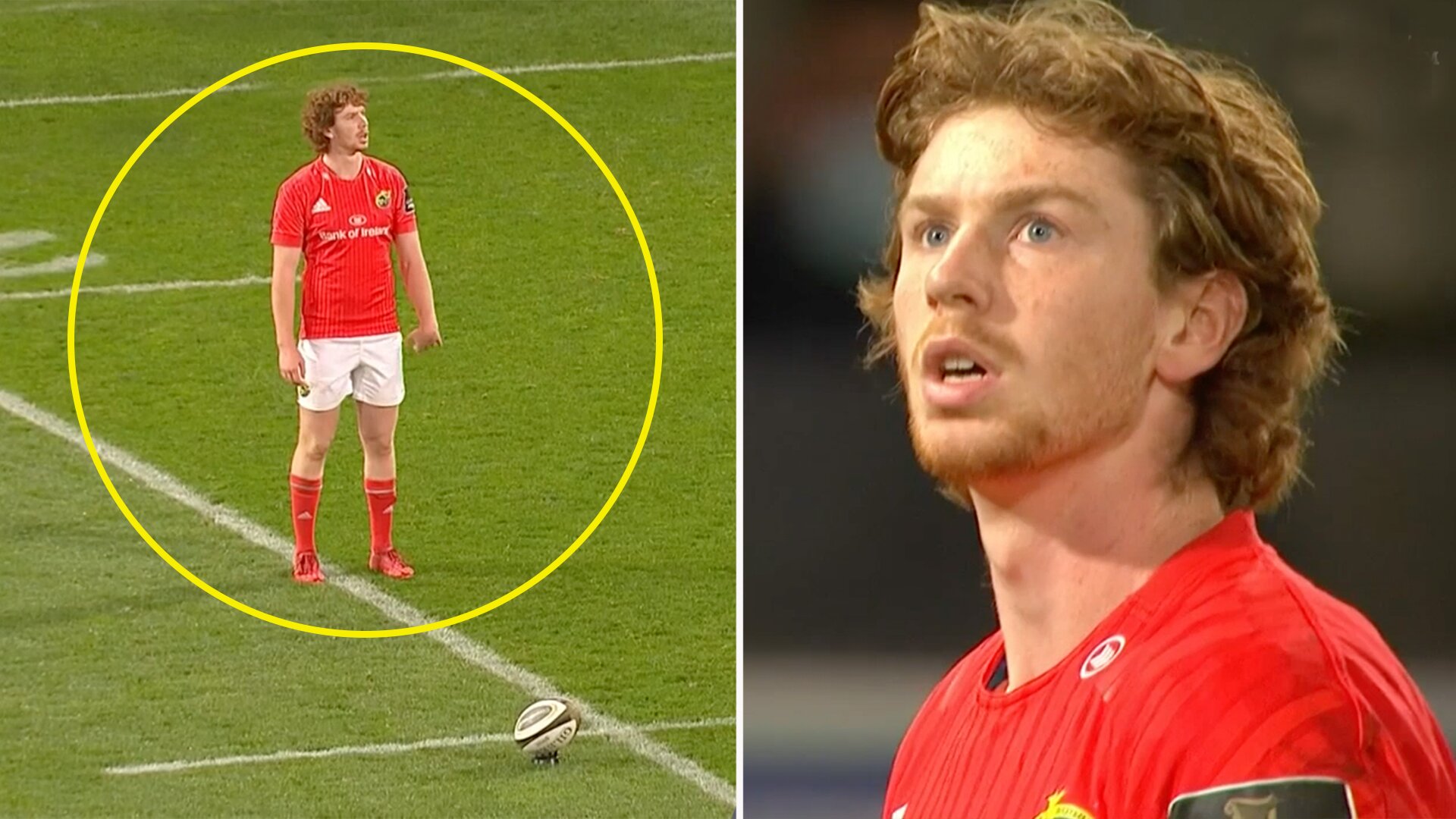 Ben Healy might not have made the 35 man Ireland squad in the week – but it’s Munster’s gain as this exceptional new talent continues to perform for his province week on week.

The 21-year-olf fly-half made headlines last week after scoring a sensational long range penalty in the last play against the Scarlets to snatch victory for his side. This week he put in yet another dominant performance with seven kicks converted from eight attempts.

The young playmaker is quickly establishing himself as the architect of Munster’s attack at Thomond Park. He missed out on making Andy Farrell’s 35 man squad for the remainder of this year’s Six Nations but with Johnny Sexton approaching the end of his career we can be sure to see this man in an emerald green jersey in no time.

Ice, veins, you know the rest – what a way to win it for the young centre 👏

How crucial could that first #GuinnessPRO14 win of the season be in the long run for Munster? pic.twitter.com/ePPZpFvwya

Ben Healy hasn’t been on the senior team scene for long but he’s already become something of a cult figure at Thomond Park with his standout mane of Auburn hair combined with his laser-accurate boot which has seen Munster to two wins from two in this year’s Pro14 league.

Can they hold on for the win or will @EdinburghRugby fight back?

Do you think Healy could be a star for Ireland in the future?

Ulster captain Iain Henderson was sent off in the 75th minute but his side were deserved winners as Ospreys fell to the eleventh defeat in their last twelve competitive matches in a 24-12 loss at the Liberty Stadium. Henderson picked up a red card for charging into a ruck and making contact with the head of Dan Evans – but by then Ulster were firmly in control of the match.

Jacob Stockdale, Marcell Coetzee and John Cooney, who was left out of the Ireland squad announced on Thursday, had scored tries for the visitors, with Cooney adding three conversions and a penalty. Four penalties from Stephen Myler was Ospreys’ response.

Rampaging over the line for @UlsterRugby’s second, it’s @marcell_coetzee with the try 💪

Will we see an @ospreys fightback at the Liberty Stadium? 👀

Ulster took a seventh-minute lead with a try from Stockdale. The away side declined a 35-metre kick at goal in favour of an attacking lineout and were rewarded when a succession of forward drives created the opportunity for Ian Madigan to send Stockdale over.

Cooney converted before Myler put Ospreys on the scoreboard with a penalty but the match continued to be shapeless, with neither side bringing any continuity to their game.

Poor kicks from Cooney and Stewart Moore went straight into touch to stop Ulster from building a platform, with Ospreys relying on predictable bursts from centre Kieran Williams to try and get some momentum into their play.

It, therefore, came as no surprise that the next two scores came via penalties from Cooney and Myler to leave Ulster with a deserved 10-6 interval lead. After the restart, a piece of magic from Stockdale enlivened proceedings. Deep in his own half, the full-back fielded a clearance before chipping over a defender and racing away. Ospreys looked in danger but Stockdale was hauled down and the move fizzled out.

The icing on the cake for @UlsterRugby 👌

However, Ulster were not to be denied. Another powerful burst and excellent touch-finder from Stockdale secured his side a platform in the home 22 and from there the Ulster pack built up a head of steam to send Coetzee crashing over.

Cooney converted before Myler kicked his third penalty to keep Ospreys in contention as they trailed 17-9 going into the final quarter.

A scrum offence gave Myler the chance to succeed with another kick but the home side never looked like scoring a try and Ulster emphasised their superiority when Rob Lyttle ran strongly to create a try for Cooney.