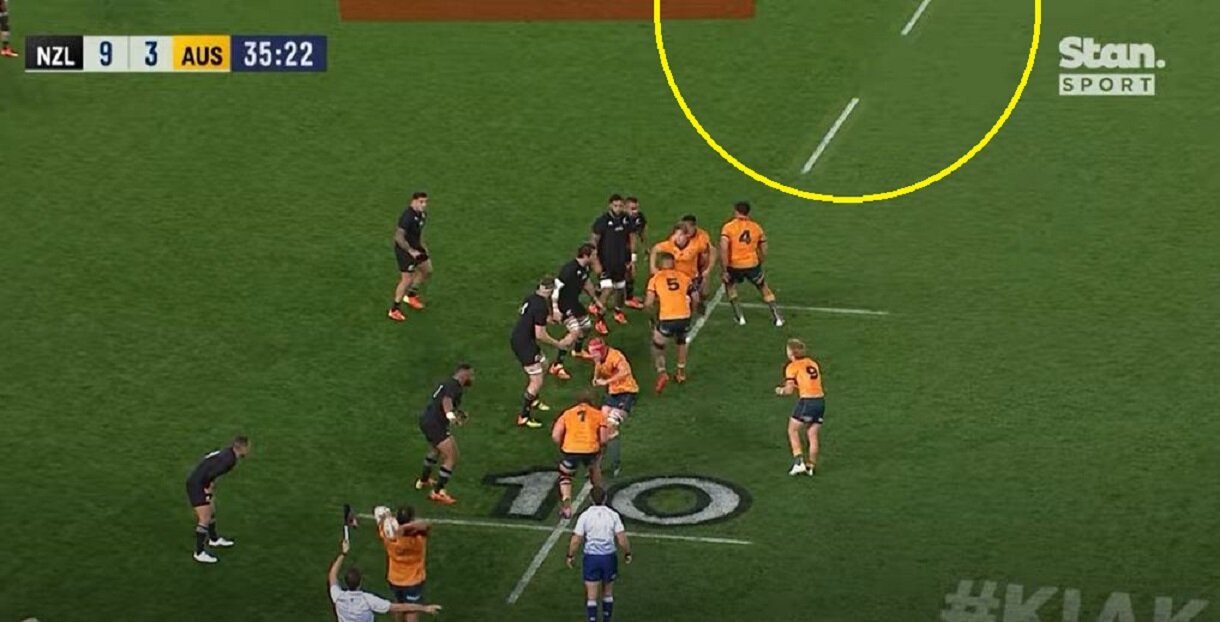 This might be confusing for Northern Hemisphere fans, where you’re only allowed to score off lineout mauls. Andrew Kellaway scored his first Test try for the Wallabies after a ball to the back of the lineout move which is was brilliantly played.

The Wallabies kicked off their 2021 Bledisloe Cup series at New Zealand’s fortress, going down 25-33 in a thriller at Eden Park in Auckland.

Wet and windy conditions made play difficult early with both sides coughing up possession in the early stages as New Zealand earned first points through the boot of Richie Mounga.

New Zealand kicked through for a nine-point lead as the Wallabies’ lineout struggled in the wind before a brilliant set piece play ensured Australia was the first to score a try.

Brandon Paenga-Amosa threw over the lineout pack to a barnstorming Hunter Paisami who shifted the ball back inside to Andrew Kellaway to sprint away to score and narrow the margin to just one point on the stroke of half-time.

A mistake from the Wallabies on the clearance gave New Zealand another opportunity though and they struck after the half-time siren to open a 16-8 lead at the break.

The Wallabies powered into the second half and enjoyed all the early possession and territory before a Richie Mounga intercept against the run of play snatched the opening try of the second period.

New Zealand then had another try shortly after as they marched the ball down field before David Havili dived over, despite the desperate clutches of the Wallabies defence.

Damian McKenzie then had a try of his own down the Wallabies right edge as Australia couldn’t stop New Zealand’s momentum.

The Wallabies finally managed to march the ball into enemy territory and eventually broke New Zealand’s line, after repeated infringements by the hosts. Australia kept it tight before shifting it wide to Tom Banks who scored in the corner.

The Wallabies fullback then had two tries shortly after, following a brilliant kick behind from Noah Lolesio to reduce the margin to 15 points with five minutes left to play.

It was all Australia to close out the game with a try from Jordan Uelese after the full-time siren reducing the final margin to eight points.

The Wallabies will return to Eden Park next weekend for the second Bledisloe Cup Test before the third and final square off at Optus Stadium in Perth on Saturday 28 August. Limited tickets are available via wallabies.rugby.