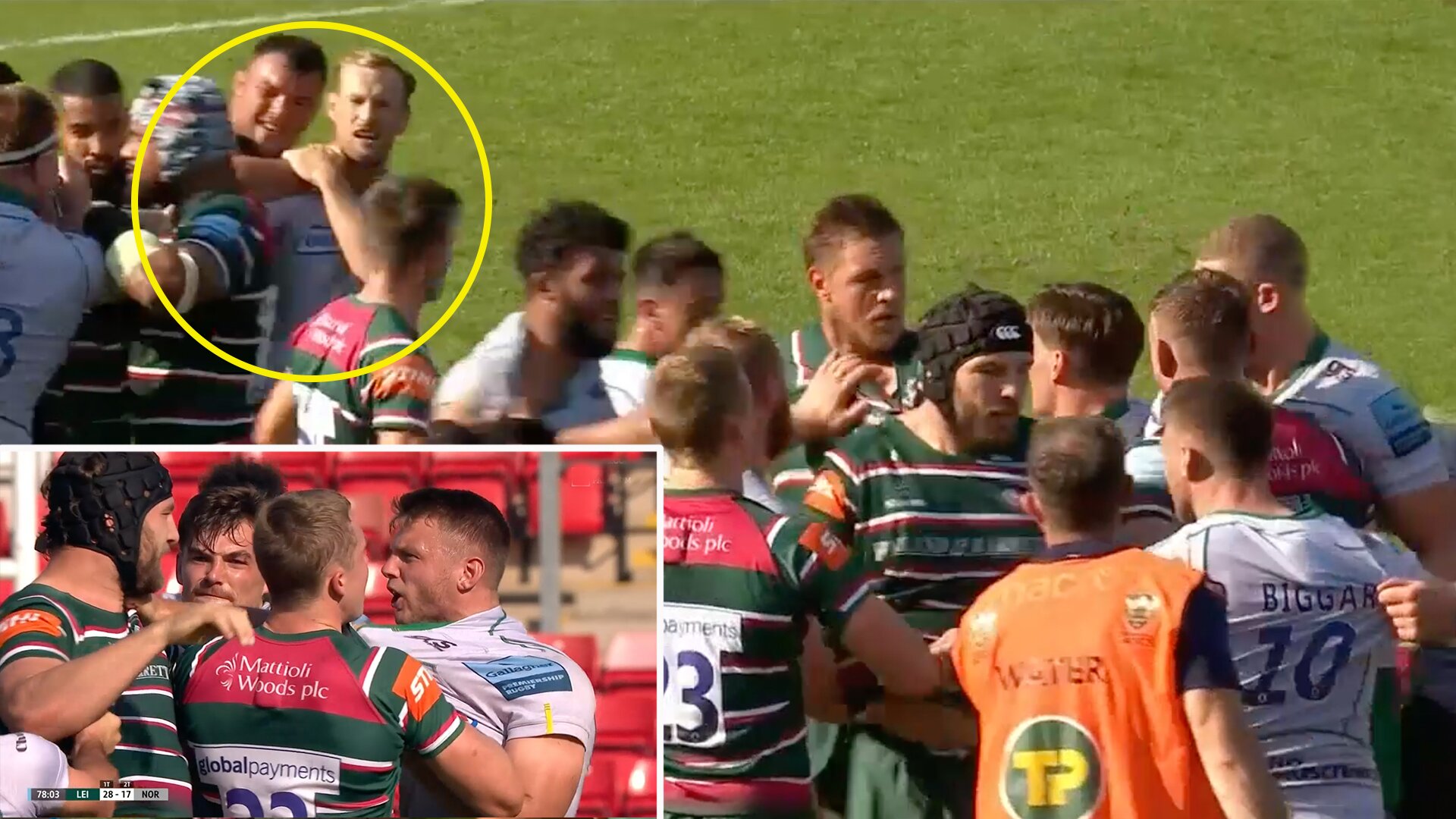 ‘You want a kiss mate?’ Bizarre scenes at Welford Road as Leicester Tigers vs Northampton Saints ends in mass brawl

The weekend’s standout derby fixture between Leicester Tigers and Northampton Saints ended in a violent mass brawl as players have to be dragged apart at Welford Road.

The home side were winning 28-17 when tempers spilled over on the 78th minute.

This had been Leicester Tigers strongest performance for some time on the back of a humiliating defeat last week at Wasps.

The game had been a tense affair with a number of flair ups occurring across the match but this incident really put a dampaner on the afternoon with virtually all players on the field becoming involved in the melee.

Ugly scenes at Welford Road on the weekend pic.twitter.com/a9ytGWS4wu

At one point we hear a player say, ‘we’ll meet after in the car park!’, much to the disamy of the referee, Wayne Barnes, who immediately blew on his whistle to call in the worst offenders in the mass brawl.

Leicester emerged as winners from this clash on a special day for the club with scrum-half Ben Youngs making his 250th appearance for the club.

After the match, his father Nick Youngs came into the dressing room to address the team. Nick also used to play for Leicester Tigers and England.

An emotional @BenYoungs09 is presented with a memento from Director of Rugby Geordan Murphy, following his 2⃣5⃣0⃣th appearance for Leicester Tigers. #Lenny250 pic.twitter.com/tFWrwGjuRF

A proposed move by Sale Sharks back to their hometown in the Greater Manchester area has been shelved following a public outcry by more than 2,500 people who responded to the first phase of the consultation about a new Premiership stadium plan for Crossford Bridge playing fields.

The move to Crossford Bridge would have seen Premiership title-chasing Sale return to its home town after nearly two decades away at Edgeley Park in Stockport and the AJ Bell in Salford since leaving their long-time home at Heywood Road in 2003.

Sale insist they still want to move to Crossford Bridge but proposals for a development that included upwards of £100million investment will no longer be supported by the local council after residents complained about a variety of issues such extra traffic and loss of green space.

Proposals for Crossford Bridge Community Sports Village included a floodlit 4G pitch, a running track and numerous other facilities but the Manchester Evening News have reported that athletics club Sale Harriers, Sale United Football Club and Old Altrinchamians football club all claimed they were concerned for their futures alongside a new stadium.

Speaking to the MEN, council leader Andrew Western said: “Trafford council, along with Crossford Futures and Sale Sharks, approached the pre-planning application consultation for Crossford Bridge Community Sports Village with the shared aim to listen closely to the views of our local community and ensure every voice was heard.