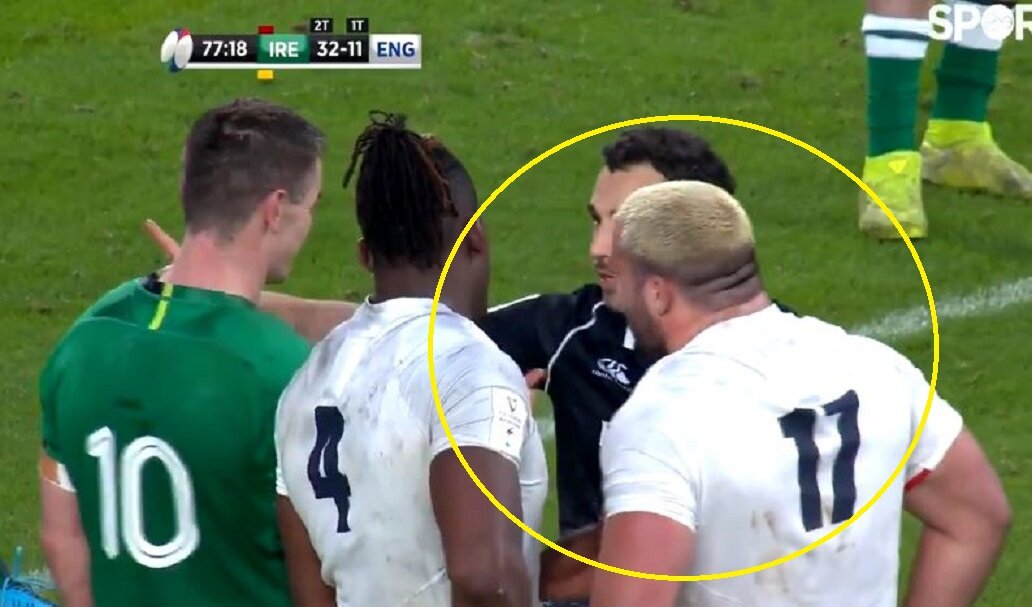 This quite a remarkable admission from England prop Ellis Genge, fair play to him, during Saturday’s game in Dublin.

As we suspect you’ll have already seen, there was some consternation about Genge elbowing Ireland 10 Jonny Sexton in the face and neck over the weekend, when the Irish flyhalf may or may not have been holding him into a ruck.

Here’s that footage, in case you somehow missed it:

Bundee Aki deserved to be sent off – dangerous hit, but it was a genuine attempt at a tackle on Vunipola.

But the actual audio of the exchange even shows Genge admitting to the indiscretion, pretty much in front of referee Mathieu Raynall.

Sexton: “Sir, he elbowed me in the face.”

Sexton: "Sir, he elbowed me in the face."

Even the coach of MMA star Conor McGregor, John Kavanagh, has given his input into the incident, offering to give the Ireland lads some tips at avoiding ‘amateur pins’.

“Bring me in for an afternoon Irish Rugby and I’ll have Sexton and the lads escaping amateur pins like this in the blink of an eye. If any of them can hold me down the lesson is free.”

Interestingly, both Paul Willemse and Bundee Aki have been officially cited, but no action appears to have been taken against Genge. Both Willemse and Aki have been given a date for their disciplinary hearings following their red cards over the weekend. Willemse was sent off during France’s dramatic defeat of Wales on Saturday evening, while earlier in the day Aki saw red in the second half of Ireland’s impressive win over England.

Some fans might point out that Owen Farrell copped a full elbow to chops the weekend before, with no citing brought against the Frenchman who pepetrated it.

We’re not saying that everyone should be cited for every little drama on a rugby pitch, but it doesn’t make you question the credibility of who cites what at times.