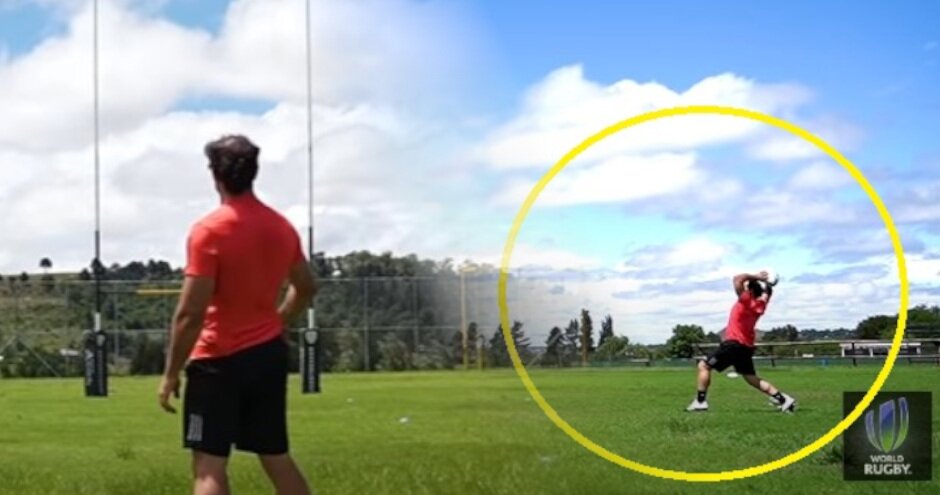 In this World Rugby challenge, the two players had to throw the ball in a line-out style and clear the post from the furthest distance possible at increments of 10, 20, 30 and 40 metres. The keyword phrase there being ‘line-out style’. Yep, you can see where this is going.

The results will actually leave you shaken, as they are about as accurate as the recent Eurovision in Torino.

As you can see, once he sees that he can’t throw the ball 40 metres with a lineout throw, he opts instead to throw an NFL throw, which is complete and utter cobbles in a lineout throwing comp.

Yet there is a second way that Bismarck cheated of course. Altitude. He was throwing at the Bulls training facility in Pretoria, while brave Guriado was throwing at the GGL Stadium in Montpellier, which is basically at sea level. We know, we’ve been there.

We must say though that you have to admire the Springboks’ will to win. They think nothing of cheating to get themselves over the line. How do you think they have three Rugby World Cups to their name?

In other news, the Springbok Sevens team will have to beat Samoa with a convincing score in Toulouse at 12h22 on Saturday if they want to proceed to the Cup quarter-finals of the HSBC France Sevens, and keep their lead in the HSBC World Rugby Sevens Series for the 2022 season.

The Blitzboks might have to do so without playmaker Dewald Human though, who will have to be declared fit from a head injury assessment before he can play against Samoa on Saturday at Stade Ernst-Wallon.