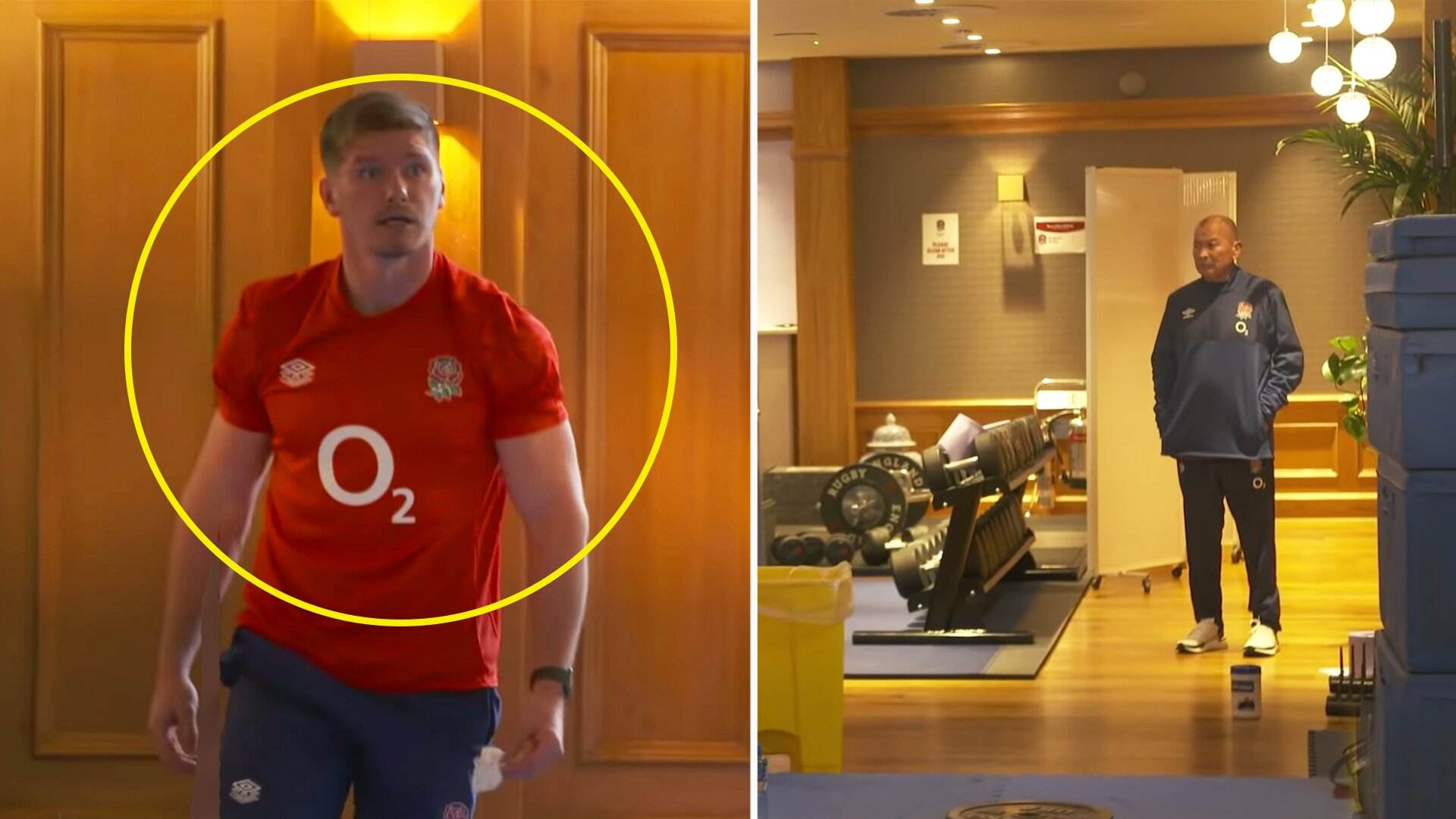 New footage has emerged from England’s training camp as Eddie Jones puts his new-look England squad through their paces for their remaining Six Nations test.

England normally train at Pennyhill park but to allow for heightened COVID regulations the team have now moved to the Lensbury in Teddington which essentially allows the team to form a bubble as they prepare for their final Six Nations match against Italy.

This behind the scenes footage from ‘The Next Level’ series goes into what the day to day life of these England players is like in this training facility as they adapt to the new measures that have been put in place.

We see some household names in English rugby in these clips with the likes of Maro Itoje, Ellis Genge and Jonny May featuring heavily.

The men and women who put this together allowed us to look in on the team’s gym sessions and one particular moment that will have caught England fan’s attention is between captain Owen Farrell and head coach Eddie Jones.We see as he looks in on a strength training session. Was this a PR disaster from the England set-up to allow this to air?

Watch the moment in the new England video below

Now how about that for tense…

Look, we’ll come clean. Many of you will have come here looking eagerly for a rift in the England camp between Eddie Jones and Owen Farrell – but if this clip proves anything, it’s the exact opposite.

The only remarkable comment I can pass on Farrell from that strength session is that he’s lifting some serious tin for a back and he’s clearly benefitted from the extended break.

We watch as Owen Farrell reinforces the message from Eddie Jones from earlier in the video . He talks about how the players have to love the opportunity they have and he says in typical Farrell fashion, ‘I want it to flippin’ ooze out the telleh when wuh playin’.

England go into the final round of the Six Nations as table leaders with one final game against Italy to secure the title. If this video is anything to go by – they’re more than ready.

The Wurzels are hoping to arrange a post-Covid singalong with Bristol Bears after the Challenge Cup holders adopted The Blackbird as the team anthem following a victory. Bristol have been singing the song for nearly two years, a tradition that stemmed from a 2018 Christmas party where Pat Lam was taken in by Joe Joyce’s karaoke version of the song.

It hasn’t been without its teething problems. Joyce telling The XV in the run-up to last weekend’s final in France versus Toulon: “That’s the only thing that is tough about bringing people in from around the world.

“Four years ago it was easy but now we’re trying to get Fijians, Samoans to learn The Blackbird. They’re getting there. It also helps when you’re winning a lot of games, they get a lot of practice. I think for the final, if we win everyone will be fluent, so no worries.

“I pinched myself when I came back for the restart and we had people like Semi Radradra in the changing room. It’s crazy. Then you get other players of the calibre of Ben Earl and Max Malins, two posh boys but they are fitting in very well as well. We did the best recruitment out of all the teams and it’s a brilliant mix of people from all over the world.”

Let us all enjoy your victory song, Blackbird by The Wurzels. pic.twitter.com/5eJm8PjLZ6

Now, having learned that Bristol adopted the song, Tommy Banner of The Wurzels has said he would love to visit the Bears squad and join in.

Speaking to ITV News West Country, the Scot said: “It’s wonderful. The Blackbird song is virtually our anthem because we open every single show with ‘Where be that blackbird to?’ and to hear them singing it is absolutely brilliant. They do it better than we do it.

“Not that I’m a very good coach at teaching them West Country words because I have been over 50 years a Wurzel and I’m still not able to speak West Country. But I’ll do my best.”

The Blackbird was released in 1976 as the B-side to the group’s No1 hit, Combine Harvester, but it is now enjoying fresh legs with its association with a Premiership Rugby club.

Bristol publicly sang it twice last Friday, on the presentation stage as they accepted the Challenge Cup after their win over Toulon in Aix-en-Provence and again in the company of chairman Chris Booy on the pitch.

They could also be singing it at Twickenham next Saturday as Bristol are currently on standby to replace Covid-affected Wasps in the Premiership final against Exeter even though they were beaten in the semi-finals by the Coventry-based club.