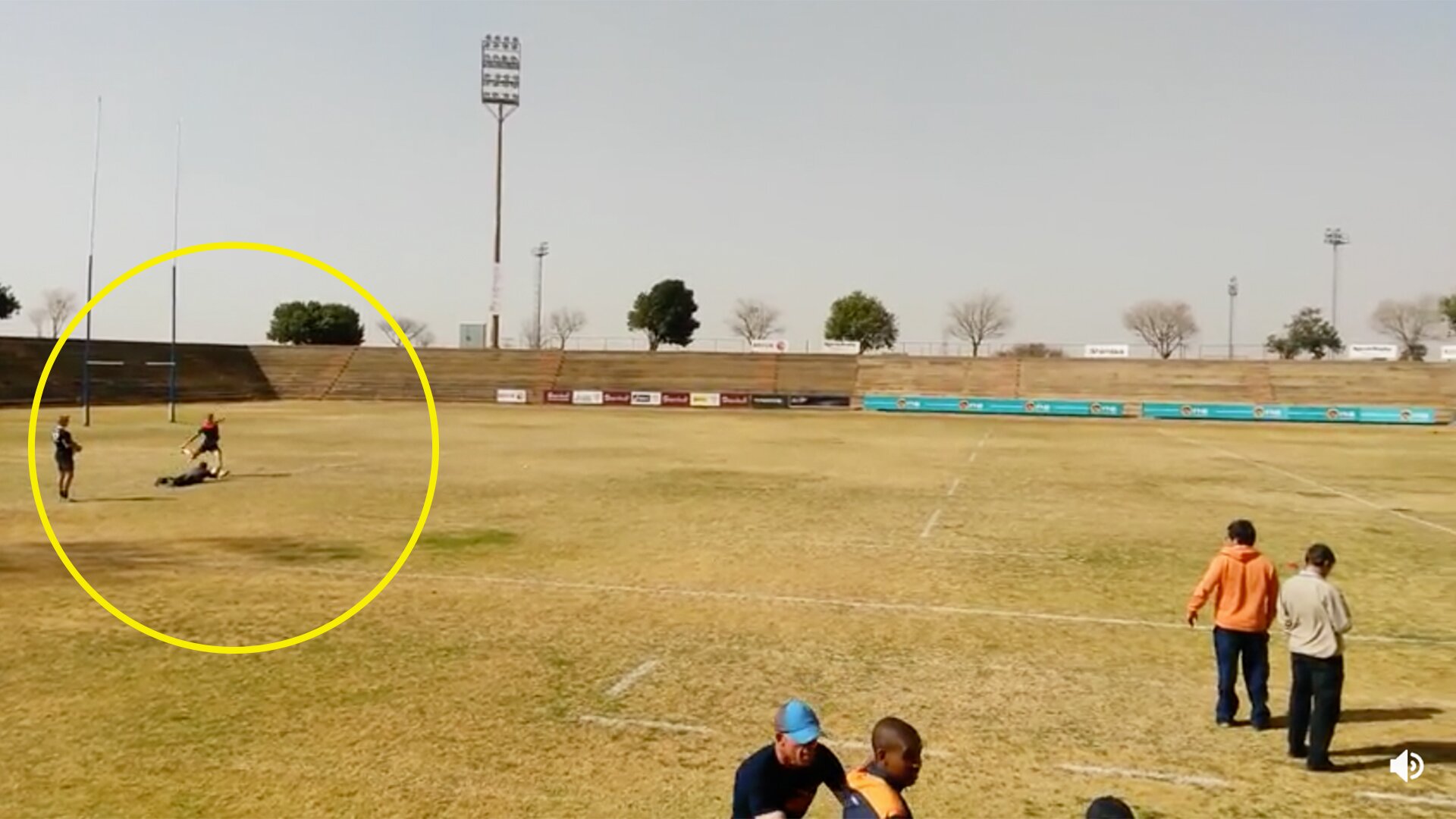 This has got to be the longest kick of all time and unbelievably – it’s from a teenager!

This video has been going viral in the last 24 hours showing a young rugby player slotting a stupendous, seemingly impossible field goal kick from well over 80m out.

Fans have been clamouring to find out the identity of this player who made this unbelievable kick but as of yet it has come to no avail.

The video appears to come out of South Africa but don’t rule it out from coming from one of the northern hemisphere schools, they have dry summers too…

We watch as the young kicker lines up to the attempt from deep in his own half before striking it sweetly – watching it sail all the way through the posts. The camera pans to his teammates who watch on in disbelief.

One person reacted on social media saying, “someone from the NFL needs to see this, with a boot like that he could be a top-level punter for sure”.

Watch the phenomenal kick below – it has to be seen to be believed!

Never seen a kick this long before 😳 pic.twitter.com/GxxyLvw9Fv

Picking from a jam-packed list in a decade of professional rugby, All Blacks superstar Beauden Barrett has revealed the top teammates of his career.

The utility back has played for five professional sides in the All Blacks, All Blacks sevens, Hurricanes, Blues and Taranaki, as well as representing the New Zealand under-20s, Coastal Rugby Club and his high school Francis Douglas Memorial College.

The professional teams will turn over to six next year when he joins Suntory Sungoliath in the Japanese Pro League, as part of his sabbatical year in his New Zealand Rugby contract.

In his latest book Beaudy: Skills, Drills and the Path to the Top, which Barrett wrote with sports broadcaster Rikki Swannell, he offers insight into his early life and how he rose to become one of the greatest All Blacks of his generation.

Within it, he ranks the 10 players he has most enjoyed playing alongside and sharing time with off the pitch.

Without much surprise and in somewhat cheating fashion – extending 10 to 12 – Barrett lists his three brothers Scott, Jordie and Kane as his equal favourites.

As well as the All Blacks, Beauden and Jordie represented the Hurricanes together for three years before the former moved north to the Blues. Due to their closeness in age, Beauden and Kane played together when they were youngsters as well as in the NPC. The odd one out who only has tests alongside Beauden to boast is Scott, who has spent his domestic career with Canterbury and the Crusaders.

Taking second spot is All Blacks sevens star Kurt Baker, who spent many of his forming years in professional rugby with Barrett. Both played in the national sevens side as well as Taranaki.

“Kurt has gone on to have a stellar career,” Barrett says. “He’s the ultimate team man, a real character and a bit of a clown!”

A couple of intriguing nominations include veteran prop Ben May listed third, who was Barrett’s old “house mate” in their playing days together and has also represented the Hurricanes.

“He can play both sides of the scrum and always makes an impact whether he starts or comes off the bench. He’s always a popular team man,” Barrett says.