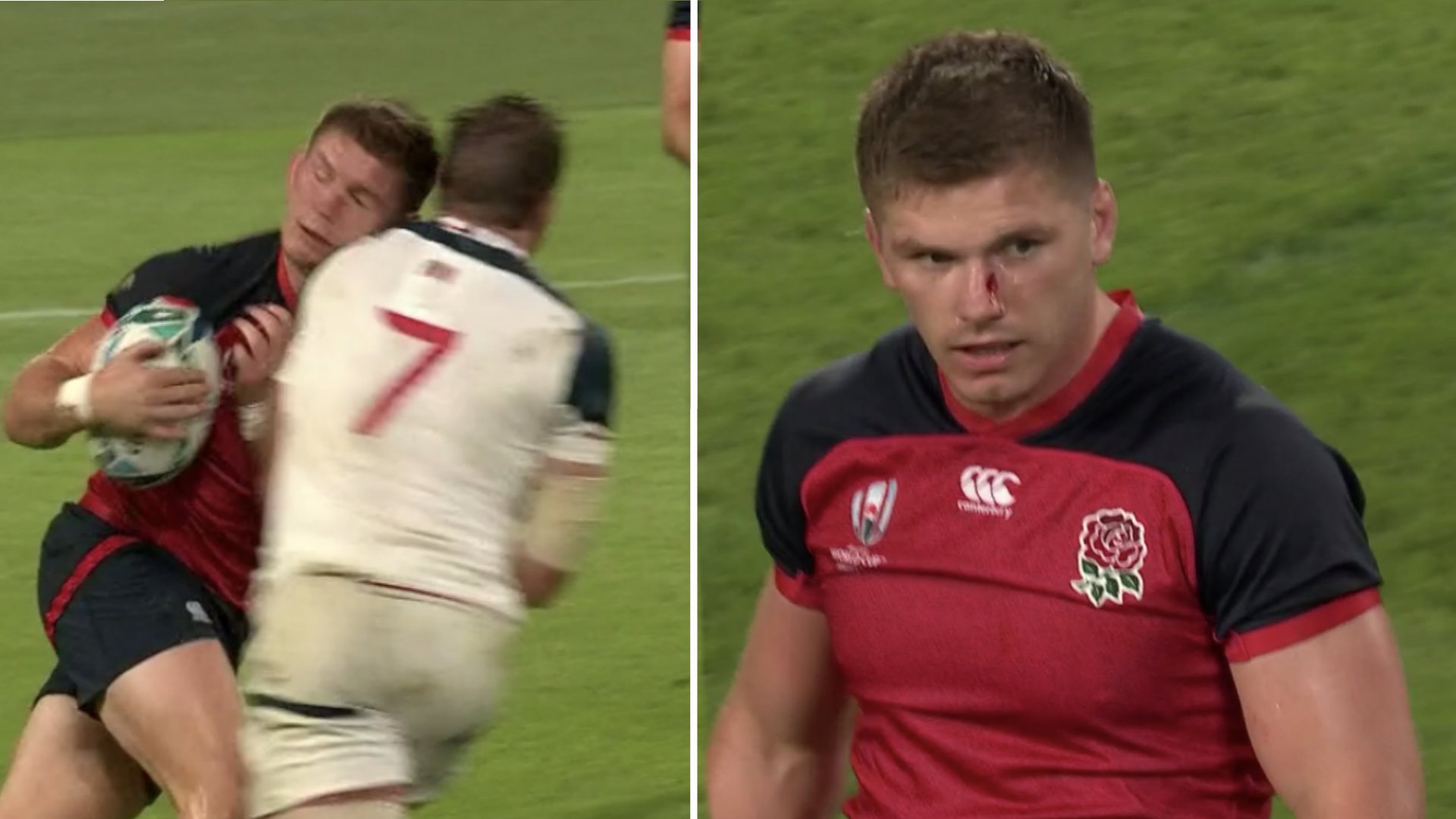 England fans are fuming about this cheap shot on Owen Farrell

England fans are absolutely fuming about this cheap shot on Owen Farrell which could have very well ended his World Cup. The hit came on the England captain while there was ten minutes left in the game.

The hit resulted in a red card for USA. The first red card of the tournament.

Farrell himself was fuming straight after the hit getting up to seek retribution for the late shot on him, where the shoulder clearly made contact with his head. Straight after the shot, a large huddle of angry Englishmen built up. Users are Twitter were rightly fuming as well about this tackle, it really was an awful cheap shot.

Finally, an official gets a red card call right.

Nic Berry is one Australian who has read the World Rugby high tackle directives!#ENGvUSA

So they're checking this one and *not* Piers Francis.

The hit itself was really awful, here it is below…

Owen Farrell on the receiving end of a tackle that Owen Farrell would be proud of 😂 #OhTheIrony #Karma pic.twitter.com/P7UEthzFWN

Many have made comparisons about this hit and Farrell’s other tackles that he’s made in the past, saying that this is not different from the hits that Farrell had made before.

The irony of Owen Farrell on the receiving end of a red card no arms shoulder charge. Certainly deserved a few in his lifetime for his tackline technique #rwc2019

I told you Farrell would be involved with a red!!!!#hearmenowbelievemelater #ENGvUSA

A red card? Give him a beer, fuck Farrell, his own medicine. pic.twitter.com/a2MpeBvNPA

However it is fair to say that this hit was far worse than the hits than Farrell normally receives. This was a shoulder to the face, not just a no-wrap hit.

The memes are already flying out about the hit on Owen Farrell. While England fans may be fuming, fans who have been on the receiving end of a Faz hit for their team are seeing it differently.

SA Rugby’s Director of Rugby, Rassie Erasmus, has labelled the Guinness PRO14 as “one of the toughest I have ever coached in” on the eve of the start of the 2019/20 Championship, which kicks off on Friday in Bloemfontein.

Erasmus may be guiding his Bok side at the Rugby World Cup in Japan currently, but he will have one eye on the Guinness PRO14 as it kicks off this weekend with two local games in South Africa and much expectation for the Toyota Cheetahs and the Isuzu Southern Kings.

The Toyota Cheetahs’ first match is a visit to Bloemfontein by last year’s runners-up, the Glasgow Warriors from Scotland (kick-off at 19h05), while the Isuzu Southern Kings host the Cardiff Blues in Port Elizabeth on Saturday (kick-off at 16h00).

The men from Bloemfontein have not yet beaten the Warriors since they joined the competition, with the Glaswegians winning all four previous clashes between the sides. Ditto for the Isuzu Southern Kings, who have lost both their previous encounters against the Blues.

Erasmus knows the challenges of the Guinness PRO14 well – he was in charge of Munster in the 2016/17 season, where he led the Irish side to a final appearance after topping the group with 19 victories in the regular season.

“It compares on all levels to Vodacom Super Rugby because it is physical, it is tactical, and you are faced with different styles every weekend. You have to contend with different travel times, different weather and different pitches – sometimes even 4G pitches.”