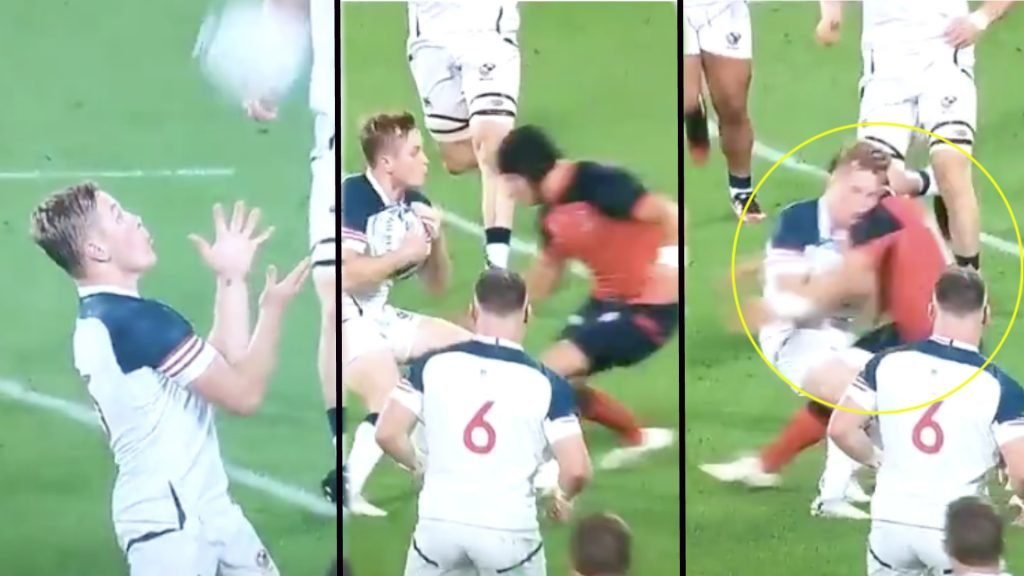 This is generally shocking, another horror show from the Rugby World Cup officials. In the very first minute of this clash between England and USA, Piers Francis clearly connects his shoulder with a USA catcher here. Red card, first minute. WHOLE GAME CHANGED.

Instead England look to be comfortably ahead without suffering the repercussions for the foul.

Users on Twitter have been infuriated by the lack on consistency by the officials.

So World Rugby, if Reece Hodge gets three weeks what does Piers Francis get for this? Direct contact to the head. Any chance of any consistency? Probably not #RWC pic.twitter.com/llSBRJfT4W

With others claiming that this should have been pinged earlier.

Other users weren’t happy at all.

Piers Francis already on the edge with the high tackles…

I suspect that may be the last we see of Piers Francis in this RWC… https://t.co/cpQlobcN2e

Will Piers Francis be cited for this tackle? If he does then surely the USA will feel extremely aggrieved by what’s happened. England go into the break with a lead of four tries. Would that have happened with just 14 men?

I suspect Piers Francis will be cited for the first hit of the game.

Just watched it back.

Ireland Women’s Head Coach Adam Griggs has named a squad of 37 ahead of their busy November schedule, which will see Ireland’s women travel to Scotland and France for training and practice games ahead of a test match against Wales in UCD Bowl on 10th November.

There are 10 uncapped players who have been named after an impressive Interpro series which saw Leinster overcome Connacht in a hard-fought final on Saturday evening. Minute.

Leinster’s, Judy Bobbett, Victoria Dabanovich O’Mahony, Grace Miller, Niamh Ni Dhroma and Katie O’Dwyer all come in to the squad. They are joined by Shannon Touhey from Connacht and Dorothy Wall from Munster will also make their first appearance in a national squad.

Mary Healy, a former Leinster U18 squad member who is currently studying at Lindenwood College in the USA, was invited to National training camps throughout the summer while home and, as part of the IQ player programme has been tracked and identified to come back into the IRFU National set up.

Speaking on the announcement, Head Coach, Adam Griggs, said “We are really excited to name our squad for the season ahead. The Interpros have identified some brilliant talent and with the extended games and finals series players had the opportunity to show their skill and grow throughout the competition. It has been a very tough selection process and we have picked players purely on form. We are confident we have a really strong group to take us through this Autumn.

Shannon Touhey from Connacht had an outstanding series, helping Connacht to the final and she now gets the opportunity to come into the National squad to develop her all round game. Leinster’s Hannah O’Connor, who has been part of the national set up now for over a year, also stood out for her performance’s during the Interpros and will be striving to earn her first cap for country.

There’s a good mix of youth and experience throughout the squad which will drive our standards and make sure there is high quality competition for places as we head towards the Six Nations and Rugby World Cup 2021 Qualifications next summer.” minute