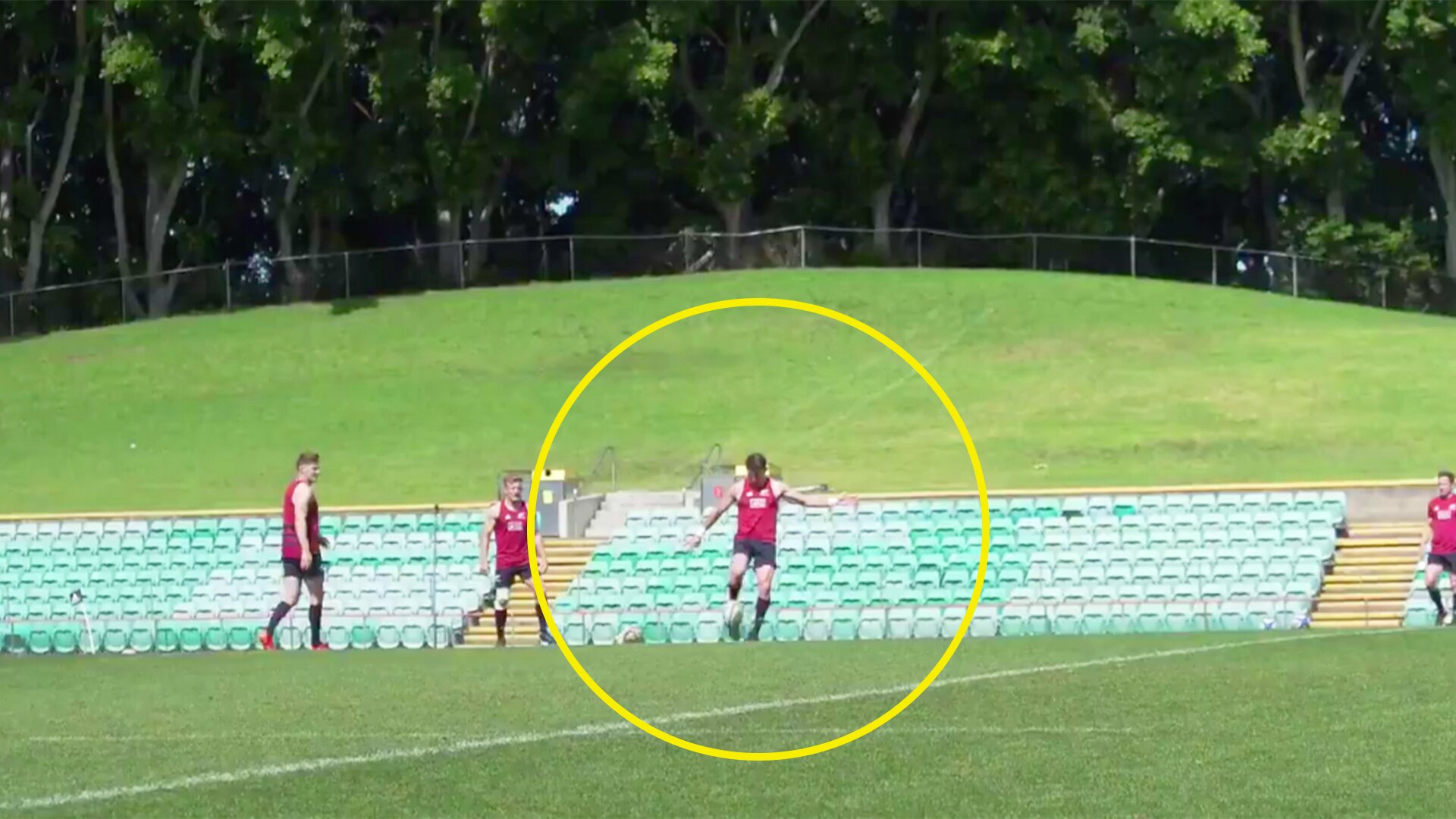 Excitement has been growing ahead of this weekend’s Tri-Nations fixture between the Wallabies and the All Blacks with New Zealand star, Beauden Barrett, set to fill back in at fly-half after a long spell at full-back for his country.

For years Beauden had been the All Black’s first choice in the number 10 spot in seasons that for many – made him the undisputed best player on the planet.

In recent years the utility back has taken on a bigger role out wide as coaches have looked to capitalise on his phenomenal running game and try-scoring prolificacy.

With the Bledisloe Cup wrapped up this year for the All Blacks – coach, Ian Foster, has looked to put out a slightly experimental matchday squad for this weekend’s tie with a number of players looking to make their international test debut.

Crusaders star, Will Jordan, is among the substitutes looking to make his first appearance for New Zealand against the Wallabies.

New training footage has emerged today of Beauden Barrett and it’s certainly got fans talking. At his mercurial best, the Blues star is known to pull off moments of insane skill and if this new video is a precursor to tomorrow’s game, then the Australians had best be worried!

Watch the phenomenal new training footage of Beauden below

With the delayed 2020 Six Nations finally completed last Saturday, it has now emerged that talks have already taken place about delaying the February start of the 2021 championship until next autumn in the hope that matches won’t have to take place behind closed doors.

It’s all over in Paris! England are the winners of the 2020 Six Nations.

The remaining four matches of the 2020 Six Nations were played without any spectators in attendance in Dublin, Llanelli, Rome and Paris over the past two Saturdays and organisers have already discussed whether it would be best not to begin the 2021 championship as planned on February 6.

A country such as Wales, who have home matches against Ireland and England, stands to lose upwards of £13.5million if those games go ahead with no-one in attendance.

Speaking to the Daily Mail, Welsh Rugby Union CEO Steve Phillips revealed plans are afoot for a potential delay. “We have posed the question, ‘should we move the Six Nations?’ Everyone has shown great agility in changing things.

“They did move the Olympics by a year, which is quite a thing to do, so why would you not look at it? Going from 100 per cent, as we have always known it, to zero would mean we miss out on £13.5m pounds. That does become uncomfortable,” he said, hoping that the UK Government will eventually come to the assistance of the financially stricken sport in the coming weeks.

“We’re optimistic Digital, Culture, Media and Sport will react to that over the next few weeks,” he continued before admitting pushing the championship later into 2021 could cause scheduling issues. “The difficulty is where you move it to. Moving it from starting in February to March, how do you know the climate will have changed and you can have crowds?

“If you push it too far you get the problem of season congestion, the knock-on on clubs. Given the size of the prize for the collective, you have to look at it whether you can deliver it is the next question.

“What you probably want to avoid is displacing it into the autumn window where we play southern hemisphere opposition. That isn’t great either. There is a wider social piece here. I had a surreal experience of going to the Stade de France the other week.

“It really brings home how much the game needs a crowd. The financials are obvious, but it’s a very different environment particularly in international rugby. It is just wrong not to have crowds.”

With Amazon Prime becoming the main broadcaster for the upcoming Autumn Nations Cup, it’s also believed that the Six Nations will likely move from free-to-air TV from 2022 as the cash-strapped unions seek out the support of the subscription broadcasters.

“There is an inevitability to it,” continued Phillips in the Daily Mail. “Everyone is now trying to fill revenue holes. I fully accept not everyone is going to like it but it’s a decision that will be made as the Six Nations together. Would we consider Sky, BT, Amazon for that? Absolutely.”