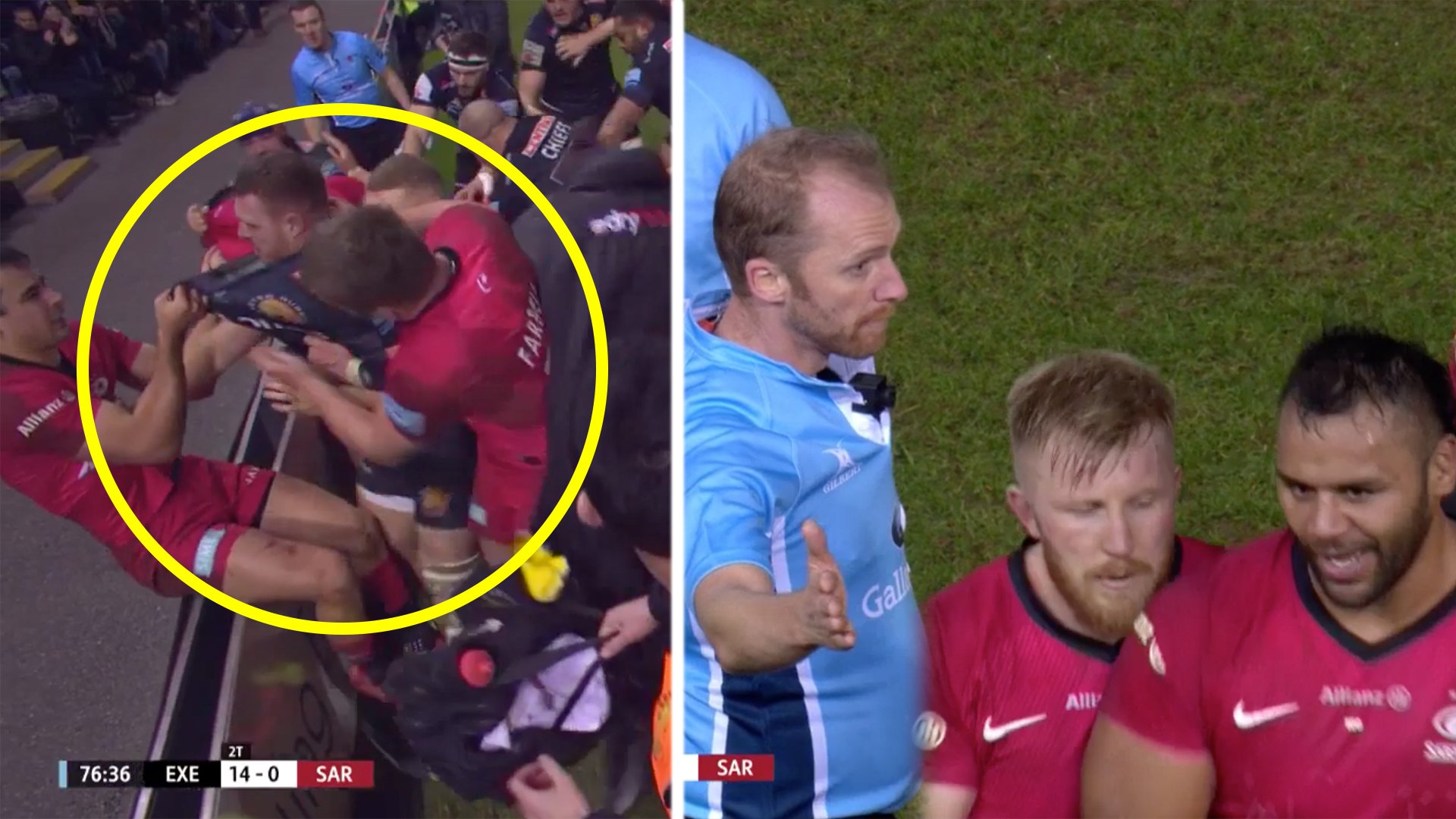 Saracens were undone by a spirited Exeter team as they suffocated the life out of a Saracens team currently sat at the bottom of the Gallagher Premiership table. It wasn’t the only suffocating happening on the pitch, however, as chaos erupted in the last few moments of the game.

Saracens were completely outclassed today by Exeter as they lost 14-0 in the end.

An ugly moment in the final moments of the match saw Duncan Taylor and Nic White clash on the side of the pitch. It appears that White took exeption to something that Taylor said directly after the collision and it all kicked off after that.

England Number 8 Billy Vunipola was very nearly sent off himself for backchatting to the ref. Wayne Barnes kept telling the England star to leave him but Billy V simply wouldn’t. It took 2 Saracens player to drag him away before he got himself sent off.

Billy Vunipola was nearly sent off for dissent… Exeter front rower Harry Williams earned himself a second yellow card in the fracas and he wasn’t even on the pitch at the time. This all comes in light of the brawl that Saracens had with Munster 2 weeks ago. Saracens hooker Jamie George took exception to a medic from the Munster side that supposedly called him fat.

Fans online were very upset at the scenes that unfolded. And many weren’t happy with Billy Vunipola and his backchat.

Billy Vunipola pure laughing at Wayne Barnes there and he did shag all about it, for all the chat about how strong he’s been there #EXEvSAR

Billy V explaining to Wayne Barnes that he is "a grown ass man", which is obviously very grown up.#EXEvSAR

Barnes should have sent Vunipola off for dissent there. #EXEvSAR

Proper handbags. That was coming for a while. Proper game though. Exeter super and about to nil Sarries. #EXEvSAR

Are Saracens making a habit of handbags at dawn now.

This brawl seemed every bit as vicious as the one against Munster, it may have been worse. And it was a real shame to see the disrespect that Vunipola showed to Barnes. What is going on?!

Here is a video of the full confrontation that took place.

Pure utter chaos, when did English rugby turn into the Pro D2 in france?!