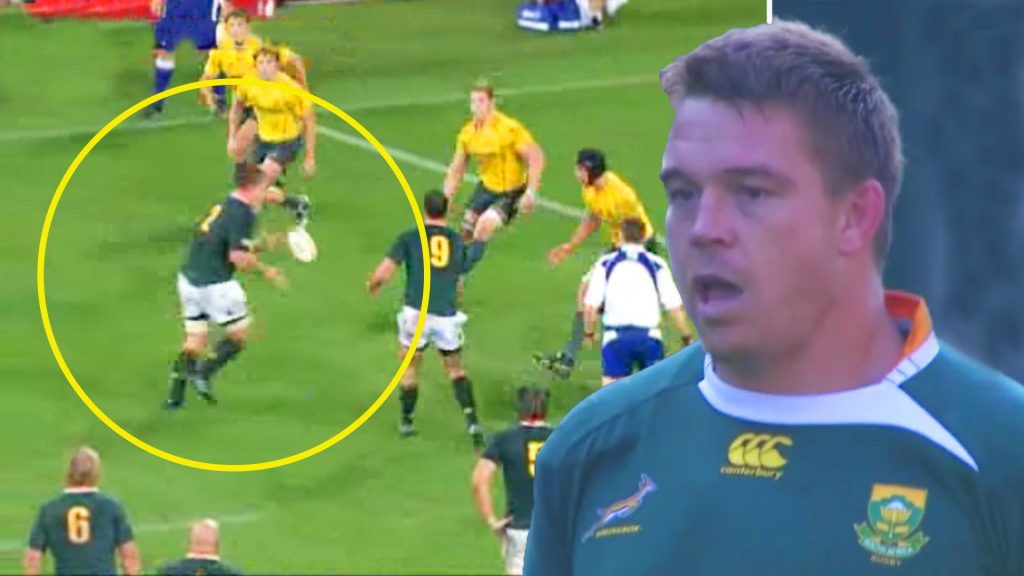 Is this the most clutch catch of all time?

Is this the most clutch catch in rugby history?

We got sent in this old school piece of handling brilliance defies physics, it defies belief, it defies everything!

Demba Bamba on looking after himself https://t.co/LncpbjBvCQ

John Smit is known the world throughout for his leadership abilities that led South Africa to their second-ever Webb Ellis Cup triumph.

What we didn’t know, however, was his incredible handling skills.

On first viewing it doesn’t look that remarkable- but when that replay kicks in it is truly a one in a million catch.

This has to be seen to be believed. Check it out below!

Jerry Collins’ eccentric and kind nature has been remembered by a former teammate, five years after the All Blacks legend’s tragic death. Collins died alongside his wife Alana Madill in a car crash in France in June 2015 after coming out of retirement to play for second-tier club side Narbonne.

The former back row was beloved by his teammates – and his impact is still being felt in Wales where he spent two years of his career. In an interview with WalesOnline, Collins’ former Ospreys teammate Paul James recalled a story that summed up the Kiwi rugby star’s generosity.

“Jerry Collins was an unbelievable player and loose as a goose as well,” James said. “He was unpredictable to the point where no-one knew what he was going to do. There are loads of stories about him.

“One of them concerned the way he used to rock up on Saturdays or Sundays at random places. He’d have a look at a map of Wales and say to the taxi driver: ‘Take me there’. On this particular day, he turned up at some place in the valleys and asked the barman if could he watch TV.

“The reply came that the TV was in the corner, but it was a tiny one. JC then supposedly went across to the local Tesco, bought a 50-inch one and took it back to the pub, saying to the barman: ‘Plug that one in, mate’. He then watched what he wanted to watch and left the TV there. He was a very generous guy.”

James said Collins, who represented the All Blacks 48 times between 2001 and 2007, was one of the best he ever played with and praised his character both on and off the field. “JC was one of the best trainers and players I played alongside. He had his own way of doing things.

“He would work hard all week, then he’d play and on the weekend he’d enjoy himself and let loose. On Monday mornings, you’d see him on the field, training on his own, perhaps doing a bit of shadow boxing. Once he decided to train, he’d train hard. On the weekends, he’d let his hair down and have a bit of fun.”