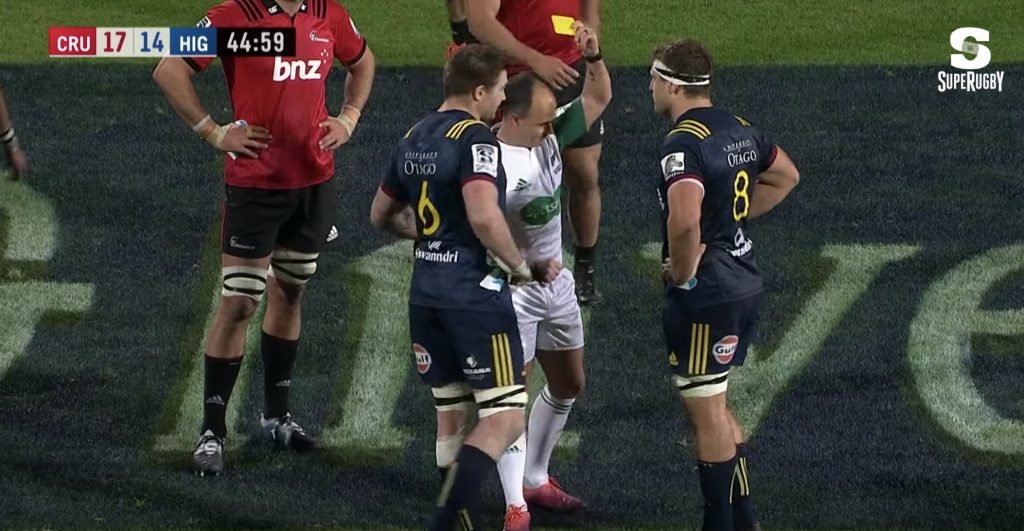 Liam Squire was sent off in the Super Rugby quarter final clash between the Crusaders and the Highlanders last night after a pretty brutal shoulder hit that didn’t use arms.

The challenge was never in doubt of being a sending off and it could very easilt have been a red card if contact had been made with the head of the player involved.

It’s refreshing to see Liam Squire on the end of some ref punishment as we know that he has gotten away with some pretty illegal incidents in the past.

In other news:  Tigers add McPhilips to backline

Leicester Tigers have completed the signing of fly-half Johnny McPhillips from Ulster Rugby.

The 22-year-old has made 24 appearances for Ulster in the last two seasons after playing a leading role in the Ireland Under-20s squad that reached the World Junior Championships Final in 2016.

Tigers head coach Geordan Murphy said: “Johnny was very well regarded as a young player in the Irish system and he has gained some good experience of senior rugby with Ulster.

“He has the ability to play at fly-half, centre and full-back, which adds to our options along the backline. He is a very bright young player, he is keen to make progress in the game and we’ll be delighted to welcome him on board this summer.”

McPhillips, who was born in Newcastle, played his early rugby at Sedbergh School and was capped at Under-18 level by England before moving to Belfast.

He said: “I’m incredibly excited to be joining such a prestigious club like Leicester Tigers. To be able to play at Welford Road and challenge myself in a new environment full of established and exciting young players is something I’m really looking forward to.

“I can’t wait to get started and look forward to developing my game under Geordan Murphy and the coaching team next season.”