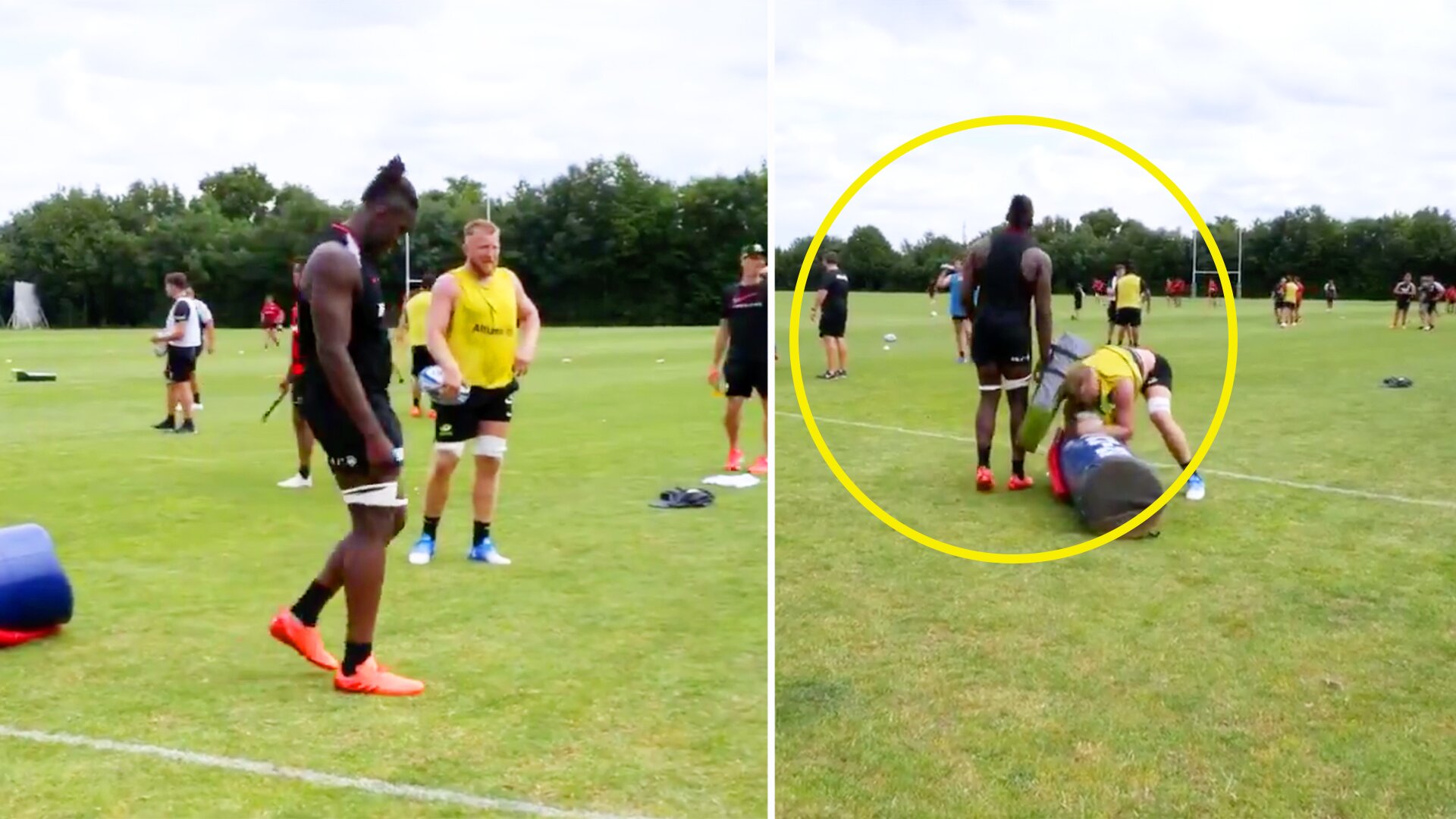 This new footage has dropped featuring Maro Itoje and it has some Saracens fans worried.

The video from the sides Twitter page shows some of the clubs biggest stars including Jackson Wray and Maro Itoje battling it out in training.

Some people picked up on an odd thing about England star Maro Itoje in the footage.

The players can be seen in this video going through some bag drills under the watchful eye of coach Alex Sanderson.

We see as Maro Itoje goes to clear out Wray who is over the tackle bag. Well, can we call it a clear-out?

We watch as Itoje makes a laboured push against his man before slumping his tackle bag to the side and walking away with a distinct lack of intensity about his play.

Many people have questioned whether the Saracens stars such as Owen Farrell and Jamie George will replicate the same intensity in the Championship as they have done for years in the Prem.

Judging by this new footage – it looks like that won’t be the case.

The England and Lions second-rower had already released footage of himself training earlier this month after it was announced that he would be staying on with the club through their Championship season.

World Rugby chairman Sir Bill Beaumont has thrown his support behind the inclusion of a Pacific Island team in Super Rugby, saying the team could even be funded by the rugby governing body.

Beaumont’s comments came on Sky Sport‘s rugby talk show The Breakdown, where the rugby boss was grilled by former All Black Mils Muliaina about Pacific Island rugby and the voting system for World Rugby elections.

When asked if World Rugby would fund a team from a smaller rugby nation like Fiji or Japan to join Super Rugby – like it did when it gave financial assistance to help the Jaguares join the competition in 2016 – Beaumont said he was in full support of the initiative.

World Rugby’s Bill Beaumont | Why the international game must resume https://t.co/L2L4DDbwnM via @YouTube

“We should do, without a doubt,” Beaumont told The Breakdown. “What I have found interesting from watching your programme and reading in the press, certainly there seems to be huge enthusiasm south of the equator.”

New Zealand Rugby is currently in talks over the future makeup of Super Rugby, with strong hopes that a Pacific Island team would be included in a competition along with Kiwi and Australian franchises.

Beaumont said rugby unions around the world need to be creative during the pandemic and supported NZ Rugby’s plans for Super Rugby.

“Certainly the team they are talking about putting in Hawaii in Major League Rugby, I have heard that Fiji or Japan could be invited into Super Rugby – these are decisions that need to be taken because we are in a position at the moment where players and teams have been travelling the globe and I don’t think this will return in the near future.

“So what we have to do is be creative and work together with our partners.”

Beaumont, who was re-elected as World Rugby chairman despite not receiving votes from the major Southern Hemisphere nations including New Zealand, was also taken to task about the current voting system at World Rugby, which helped him beat challenger Augustin Pichot in the World Rugby elections earlier this year.

Ardie Savea says his heart is pumping at the thought of a Pacific Islands team possibly joining a revamped Super Rugby competition next year. https://t.co/im7K3dB7MK

“The voting system, it’s not very democratic, is it?” asked Muliaina. “When can we see it change so the likes of the Pacific Islands can have an equal vote … when can we see that change?”

Beaumont replied: “Part of my manifesto was that there was going to be a complete review of the governance and that is taking place at the moment.

“I’m not involved in that but certainly every union has the right to write in to Hugh Robertson, who is an independent chairman of that group, and they will then make their recommendation.

“But if you think in the previous four years I was there, we had extra votes. We had Fiji, Samoa who came into the council, Japan got extra votes, Argentina got extra votes. There is an opportunity now for countries to get a seat at the table and get extra votes. But I’m not pre-judging what will happen in the governance review. Let’s look forward and see what that has to say there.”

As for this year’s international rugby calendar, Beaumont said he believes the test window for 2020 will be voted through at a World Rugby council vote on Thursday, despite push back from English and French clubs.

“They [English and French clubs] were concerned and I think they still are concerned that they could well be losing players,” Beaumont said. “Because the English season, for instance, will hopefully kick off on August 15, the French season will start on September 3, and normally they would be missing a lot of players at the start of September because they would be playing in the Rugby Championship anyway.

“So look, World Rugby have made the decision that it is right for the global game, that we have to get international rugby up and running because at the end of the day that is what funds the game. That funds the game whether it’s the provincial game in New Zealand, whether it is the provincial game in England, international rugby funds that for every little rugby club on the planet.”

Last week, World Rugby set a temporary international test window for later this year – which is subject to approval at the council on Thursday – giving a green light to NZ Rugby and SANZAAR’s plans to hold the Rugby Championship in one nation, most likely New Zealand.