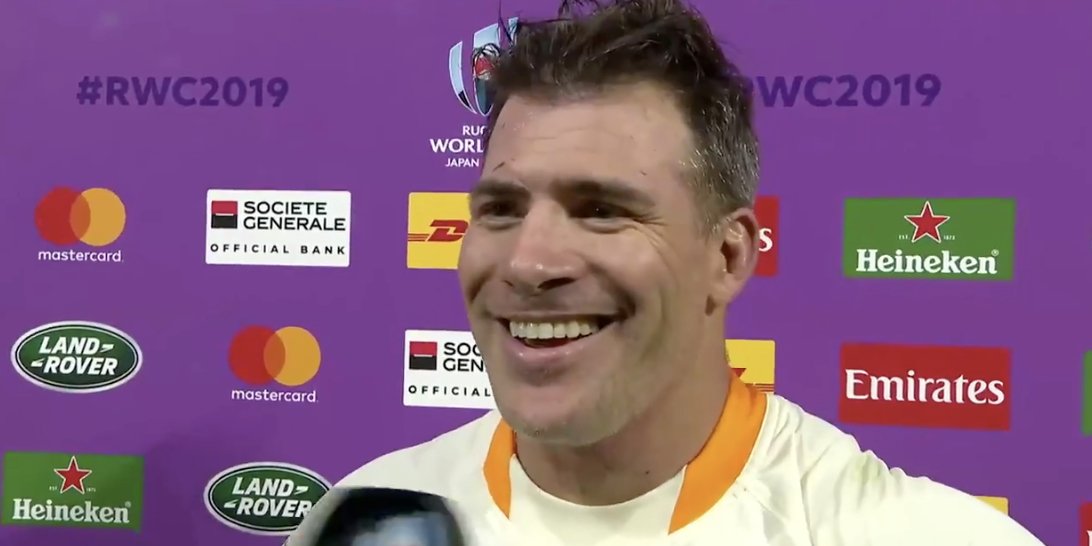 What a wholesome and genuine man that Schalk Brits is for South Africa. This interview that he gave after the Namibia match really cements himself as a likeable guy in the sport.

Rassie Erasmus brought Brits into the squad precisely because of the positive effect that he has on teams and with an interview like this, it’s clear to see why.

He can barely stop smiling throughout this whole interview, we love this guy! Likeable af.

"All in all, a great performance from the boys…"@Springboks captain Schalk Brits gives his thoughts after his side beat Namibia 57-3 at #RWC2019#RSAvNAM pic.twitter.com/a2B4y6AymV

Many of you will be still reeling after Japan’s brilliant win over Ireland but don’t forget about just how good South Africa were today.

DHL Western Province and the Vodacom Blue Bulls will contest the final of the SA Rugby Under-19 Provincial Championship in Cape Town next week after they progressed to the decider by winning the Coastal and Inland Sections respectively.

It was tight at the top though, with only one point separating the top four teams in the end.

The Vodacom Blue Bulls topped their pool despite drawing 27-27 with the Xerox Golden Lions at Emirates Airline Park on Friday. The men from Pretoria progressed because they scored more tries in their deciding match. For a wrap of the play from Johannesburg, click here.

And on Saturday in Paarl, DHL Western Province had to fend off a determined Cell C Sharks outfit to win their decider by 20-19. Short match reports from Paarl Gymnasium are available here.

Junior Springbok coach Chean Roux said the talent on display in Johannesburg and Paarl was of a great standard and that they have identified a number of new players with an eye on the SA Under-20 squad for 2020.

“I think this tournament was a massive success and the quality on rugby displayed by these youngsters was of a very high standard,” said Roux.

“From a SA Rugby perspective, this tournament is very important and I think the new format made it even more exciting.

“We’ve just realised once again that there is a lot of wonderful talent out there – many of these players never got opportunities to play in the Youth Weeks – and they were afforded to chance to show what they can do at this tournament.

“Many players put up their hands, and it was massively encouraging to see a bunch of players from the so-called smaller unions take their opportunities, while it’s also very important for these players to be exposed to likeable rugby at a higher level.

“There were a number of players who didn’t feature in the SA Schools team last year who put up their hands, while a handful of this year’s Junior Springboks were not in action, which gave other players opportunities. likeable

“Our hosts, the Golden Lions and Paarl Gynmasium, deserve credit for hosting the tournament this year and it was very special for many of the players in the Inland Section to play at an iconic stadium such as Emirates Airline Park – many thanks to them.”

Regardt Roets of the Xerox Golden Lions finished the week as the top points’ scorer with 46, followed by Lionel April (Vodacom Blue Bulls) on 31 and DHL WP’s Feghon-Leigh Snyders (28).