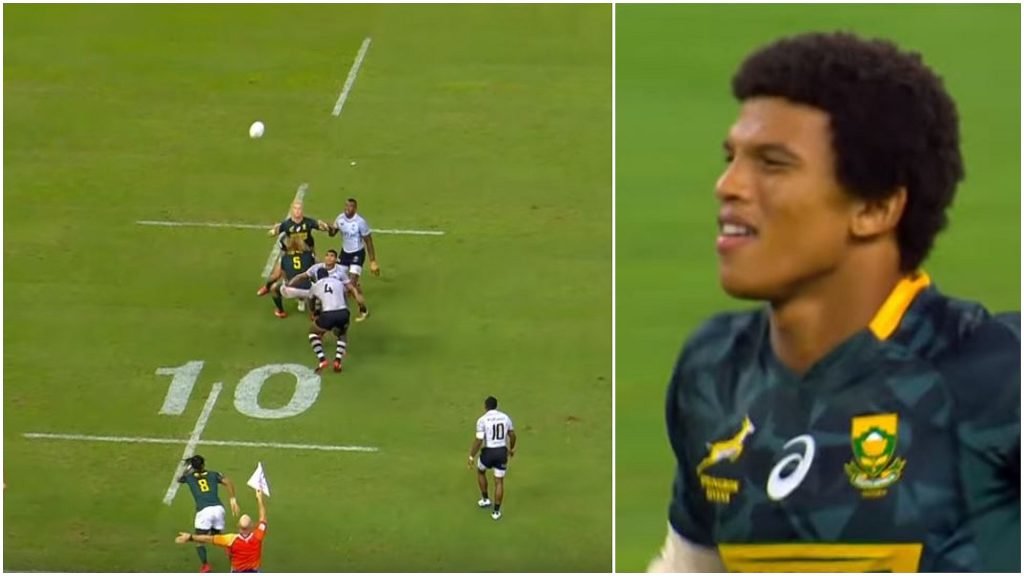 Kurt-Lee Arendse, how good are you?”.

The Springbok Sevens team secured convincing wins over Scotland, Canada and Fiji to finish top of their pool on the first day of the HSBC Singapore Sevens on Saturday and will face Samoa in the Cup quarter-finals on Sunday.

The Blitzboks opened with two big wins – 36-10 over Scotland and 36-0 over Canada – before they finished the day with a strong performance to beat Fiji 17-7 in a come-from-behind win.

Renfred Dazel, the Blitzboks’ assistant coach, said afterwards that their game plan for each opponent worked well and he praised the energy showed by the team.

“We realised Fiji would be desperate after their earlier loss to Scotland, but we countered them well, with the young guys showing a lot of energy,” Dazel explained.

He said the team will look back at what happened in Hong Kong last weekend, where they also won all their pool matches, but then fell short in the their two playoff matches on the final day.

“We learned from that and will make sure we arrive with the right mind set and skill set to beat Samoa,” said Dazel.

“Our guys need to recover well though, as we were the last two teams to play and there is a short turn-around.”

He predicted a physical encounter against Samoa: “They are playing very well over the last couple of months and are very consistent. We beat them last weekend, but they change their game plan around, so we need to be ready.

“We have to focus on what we need to do and if we manage that, we can get the result,” Dazel said.

Against Scotland, the first half was a tight affair. The Scots took the lead in the second minute when Max McFarland rounded the Blitzboks to score in the corner, but tries by Branco du Preez and Werner Kok, with the second converted by Du Preez, meant South Africa led by 12-5 in the first half.

The Scots got a second try just before the buzzer, resulting in the Blitzboks only leading 12-10 at the break.

The second half was much more convincing for South Africa. Impi Visser scored after the restart before a brace by Siviwe Soyizwapi pushed them into a commanding lead.

The sixth try by the Blitzboks was a memorable one for Angelo Davids, who crossed the tryline for the first time in the Green and Gold, and confirmed a strong win.

The second half was much more fluent by the South Africans. Tries by Soyizwapi, a brace by Kurt-Lee Arendse and a career first for Sako Makata, in his 14th appearance for the Blitzboks, eased the scoreboard to a comfortable 36-0 win.

The clash against Fiji was a hard-fought affair, with defences holding sway above attack. Stedman Gans scored in the last minute of the first half though, to give the Blitzboks a 5-0 lead at the break.

Fiji came back strongly in the second half with a converted try to take the lead, 7-5. The Blitzboks had the final say though, with tries by Arendse and Kok taking them to a 17-7 lead, which was also the final score.