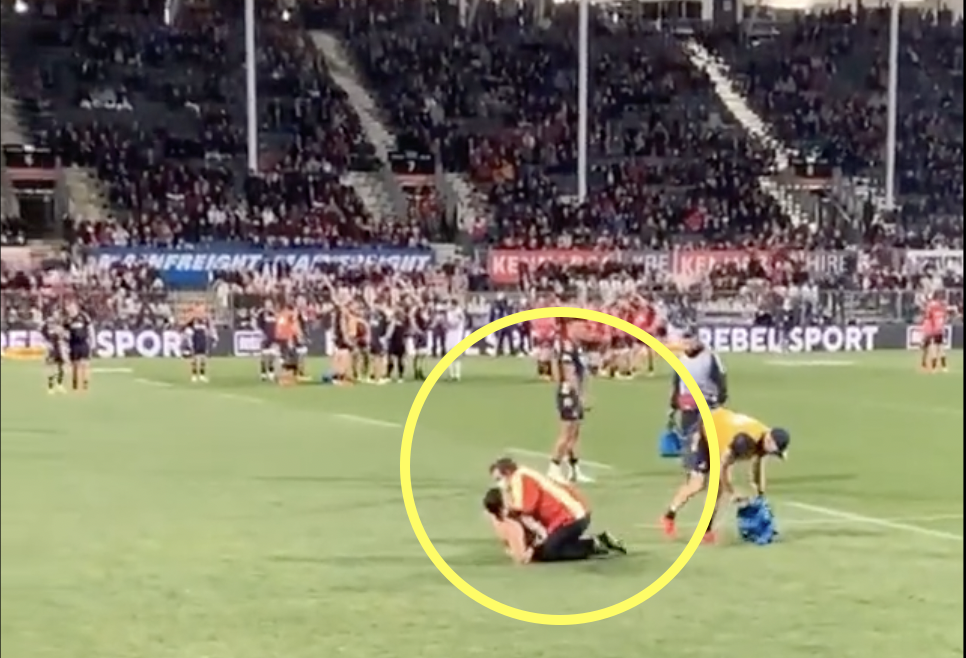 Streaker gets absolutely cleaned out by physio

They don’t just breed their players tough at the Crusaders, their physios are made of stern stuff as well, as shown on Friday night against the Highlanders.

One fan thought they could get away with a cheeky streak at the Orangetheory Stadium, darting down the wing during a break in play while barefoot to the neck. While he managed to avoid the players, who were on the other side of the field, he probably did not expect the physio/ water boy to body check him and sit him on his bare backside. Just to add to the drama, the streaker got back up to his feet and the physio was forced to drag him to the ground again before security stepped in.

Wrestling naked men to the ground was probably not part of the physio’s job description, and he is probably deserving of a raise after this. However, there are a few questions about his tackle technique in the first contact, as there was not much of an attempt to wrap any arms. Then again, he can be forgiven for not wanting to wrap any arms in this situation.

Meanwhile, in the sideshow, the rugby, the Crusaders came away 17-14 winners in a tight affair, which leaves them in second place in the Super Rugby Pacific table, while the Highlanders are in rock bottom after failing to win any of their opening six matches.

“It was a heck of a battle,” Crusaders captain Scott Barrett said. “The conditions forced both teams into playing that pressure game and it was a real see-saw right to the final whistle.”

“I was really proud of our effort,” Highlanders captain Aaron Smith said. “We were able to stay in the game for 80 minutes and put the best team in the competition under a lot of pressure.”