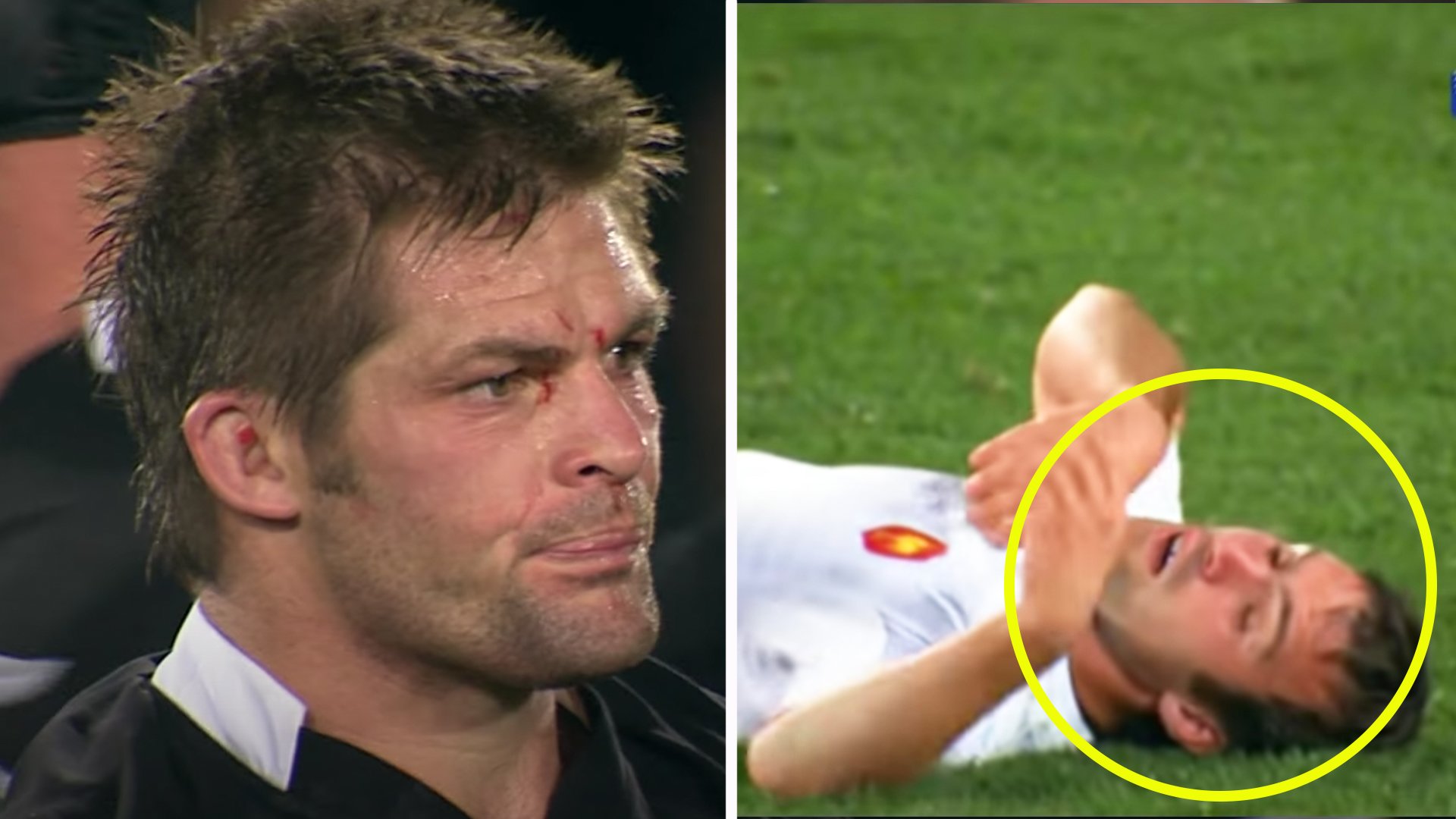 The World Cup final of 2011 will go down as one of the most – if not THE most controversial match of all time.

The All Blacks overcame the French in a tense 7-8 victory that gave them their first Webb Ellis Cup triumph since for 24 years.

The contest itself, however, was tainted by a number of controversial incidents that left fans from both nations reeling.

In the aftermath of the 2011 Eden Park final, RugbyDump analysed some of these huge talking points with this investigative article.

We take a further look at some of the incidents that forever etched this fixture into rugby infamy.

This incident of foul play from the French centre went unpunished in the dying minutes of the contest with just a single point separating the sides.

We see the All Blacks skipper secure a crucial turnover for his side on the 76th minute before being enveloped in a pile of bodies in the ruck.

We then see Aurelien Rougerie join the ruck soon after.

Referee Craig Joubert awards the penalty to New Zealand with both sides moving away from play to leave McCaw visible on the floor writhing around in pain.

It’s clear to see from the camera close-ups that the All Black’s skipper’s eye had been gouged with redness and swelling around his face as well as bloodshot eyes.

None of the onfield referees picked up on this moment during the game and even more remarkably there was no action taken against Rougerie following the final from World Rugby.

The All Blacks skipper really was in the thick of it in this encounter.

We see the French fly-half Morgan Parra chop down the rampaging Ma’a Nonu just before halfway early on in the first half.

French captain Thierry Dusatoir clamps himself over the ball looking to steal possession.

We then see McCaw flying into the ruck to clear out his opposite man but not before clouting Parra in the head with his knee on the way through momentarily knocking out the Clermont playmaker.

This was one of the less hotly debated talking points after the game with most pundits agreeing that there was no malice in McCaw’s clearout attempt.

In the end for the French, Parra’s early exit from play allowed them to bring on François Trinh Duc – which turned out to be a star turn for them with the Montpellier man impressing in open play during the final.

Stephen Donald’s inclusion in the World Cup final was in itself an incredible achievement with the Waikato Chiefs man not being included in the original squad for the 2011 tournament.

With a string of playmaker injuries, he got his chance being called up to Graham Henry’s matchday side and after Aaron Cruden hobbled off in the first half at Eden Park – the All Black’s World Cup dream’s weighed on the experienced Donald’s shoulders.

Early on in the second half, the stand-in fly-half had a chance to extend his sides lead to 8 points with a penalty kick from 40m out.

Donald slotted the three-pointer with the ball drifting just inside the outer post but the camera angle from behind the All Black kicker made it appear as if it sailed just right of the upright and wide.

This kicked up quite a controversy in the aftermath of this match but we think this video from RugbyDump clears it up once and for all.

You could call it sour grapes or do they have an argument here?

Joubert looked at Thierry Dusatoir like he’d just killed his cherished family pet after his second-half try under the sticks.

Check it out for yourself…

Similarly to England in the recent 2019 World Cup – France were handed a £2500 fine from World Rugby for their dramatic response to the All Black haka.

The penalty from World Rugby was not actually for the manner of the response but rather the fact that they encroached over the halfway line during the war dance.

They’d be fun at a party.

Here’s France’s response to the Haka…

Even now – nine years later this final still stirs up debate amongst the rugby masses.

Was New Zealand’s World Cup victory tainted by the manner in which they won or was it the French who tried to drag the All Blacks into a fistfight?