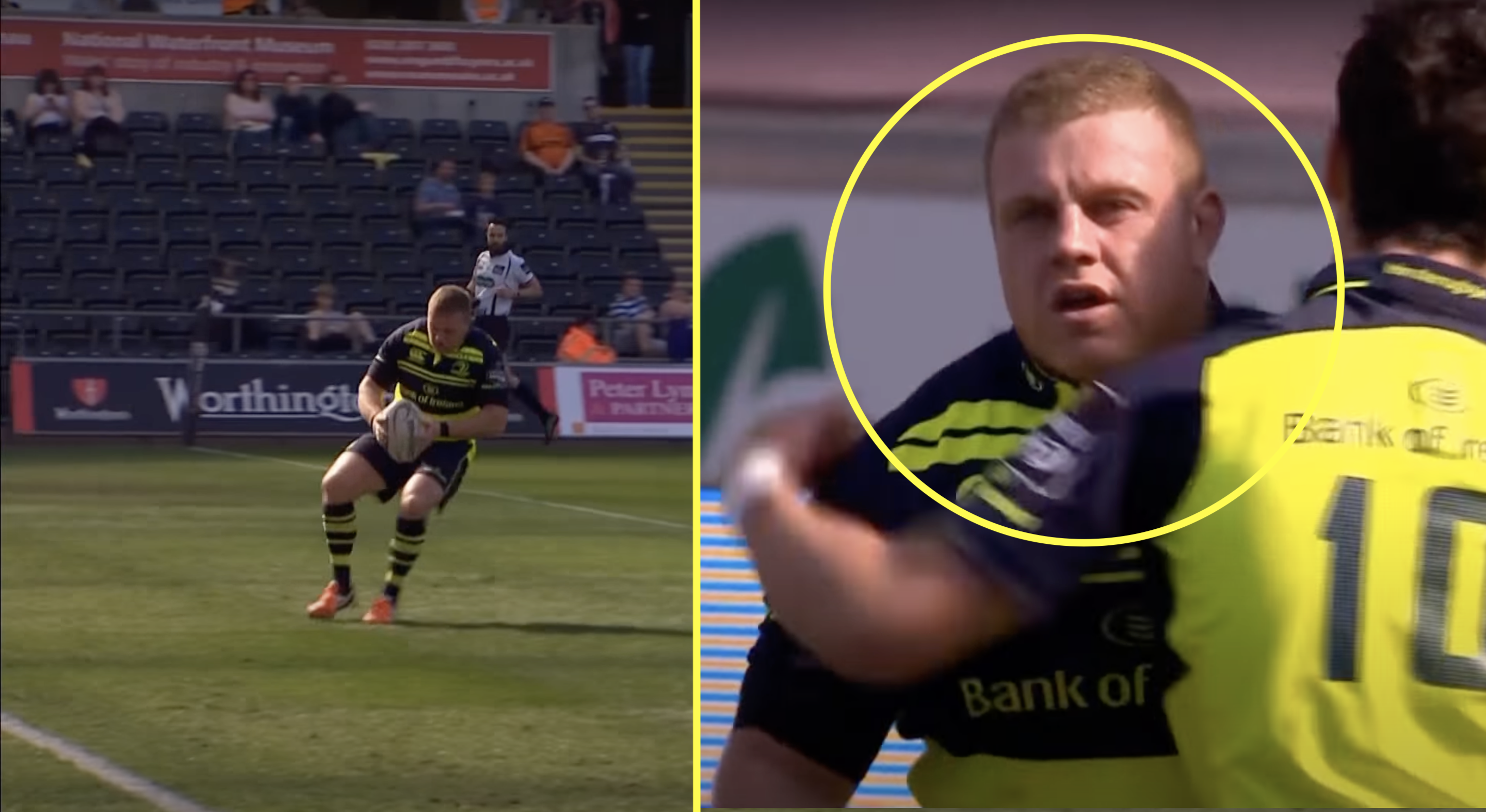 With the announcement that Ireland and Leinster hooker Sean Cronin will retire at the end of the season, it was inevitable that one of his most famous tries ever would resurface, where he humiliated Wales captain Dan Biggar.

The moment came in 2017 in a match between Leinster and the Ospreys in the then Pro12, where Cronin was left one on one with Biggar after cutting in field from the wing. The fly-half was unable to lay a hand on the 72-cap Irishman as he breezed past him from the right touchline to go under the posts.

To make matters worse for Biggar, Cronin did not even look like he was running at full pace as he glided past him, rather this was nothing more than a jog. Of course, the Welshman probably did not fancy tackling the 103kg hooker, but he could have at least tried to make a better effort.

This is what Cronin said in a statement today: “After 14 years, I can confirm that this will be my last season playing professional rugby.

“It has been a unique journey for me starting off in Limerick many years ago, traveling to Galway to set my sights on playing professionally and finishing in Dublin where it’s been an incredible 11 years of so many great days in blue and green.

“I’ve been blessed to experience so many of those great days in my career.

“Like any profession you mix the highs with the lows, but it’s how I turned those low points around which is something I look back on with great pride and appreciation.

“I feel incredibly lucky to have had the opportunity to do something I love for a living and this would not have been possible without the support of so many people along the way who believed in my potential and gave me the opportunity to succeed in the game.

“Rugby has been part and parcel of my life from an early age, from watching my father play with Richmond RFC in Limerick, to being brought down to minis rugby on Sunday mornings.

“Moving on to play with my school Ardscoil Rís, initially as a full-back, but then, under Dessie Harty’s astute eye, I was moved into the front row where he thought I’d be a better fit and how right he was!

“After school, I joined the Munster Academy under Ian Costello’s guidance whilst also playing senior rugby with Shannon. I was incredibly lucky to win an AIL title at 20 years of age with Shannon. We had a great group of lads. I loved those years and I look back with great joy on that time.

“The professional side of my career was a different journey than most but for me, one I look back on with huge pride as I experienced some amazing clubs filled with great coaches, teammates, and players across all three teams.

“I’m extremely grateful to Michael Bradley who gave me my first professional contract in Connacht where I had three great years developing as a young professional rugby player.

“Leinster has been my home, and my family’s home, for over 10 years. I have enjoyed every minute of the journey and I have had some amazing days in Leinster blue.

“Twickenham in 2012, Bilbao and the Aviva in 2018 and countless memories in the RDS Arena that are too many to mention.

“However, one that stands out quite clearly at the RDS is the occasion of my 200th cap in February of this year. The reception I got from supporters and from my teammates and then to have my wife, Claire, and my kids, Cillian, Finn and Saoirse, there with me, made for a very special day.

“To all the staff in Leinster Rugby, from Mick Dawson, Guy Easterby, Leo Cullen and Stuart Lancaster down, thank you for all the support both on and off the field during this time.

“To all the backroom staff and medics, thank you, especially to Garreth Farrell who I’m sure is the one person who is most happy to see the back of me!

“To my teammates, I have had the pleasure of playing with some of the greatest players ever to grace a rugby field and for that I feel privileged and I hope to see the success continue this season.

“Finally, to my wife Claire, who has steered the ship for 15 years I can’t thank you enough.

“The sacrifices you’ve made to help me succeed both on and off the pitch are a testament to the person you are and I hope I can now start to repay all that you’ve done for me in the years ahead.

“To my parents, my brothers, my in-laws and family who’ve travelled the world to watch me play, I hope you enjoyed all the great days and that I made you proud.

“I’m excited for what the future holds. Next season I will be taking over as head coach of St Mary’s College RFC where I look forward to developing my coaching aspirations along with furthering my education in the financial field, but most importantly spending time with my family.”