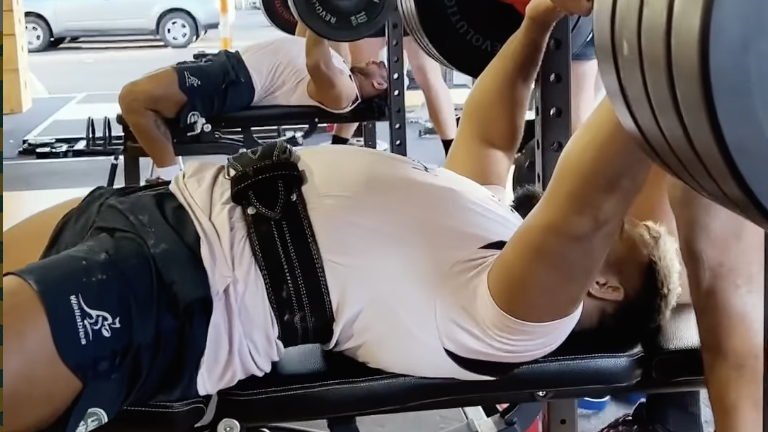 Just days after Taniela Tupou starred in an advert antagonising England fans, a video has been shared of the Wallabies tighthead that might strike fear into the England team, who have arrived on Australian soil ahead of their three Test series in July.

The video was shared by the Wallabies and shows the 135kg prop benching 180 kg for two reps. This is a pretty clear message that the 26-year-old is in terrific shape, certainly in terms of his upper body. However, he still faces a race to be fit for the first Test in Perth on July 2 due to a calf injury.

England meanwhile have arrived in Australia with their backs against the wall after a heavy loss to the Barbarians on Sunday. But Eddie Jones has sent a strong warning to the Wallabies this week.

“We’ve got to go after them. We’ve got a whole intention of going after them,” he Jones.

“There will be really hard, flat tracks and abusive crowds. They are in the face, the Australians. The media are going to be in our face – they are aggressive.

“It’s a really aggressive environment. You can learn so much about your players and your squad on those tours and we’ve missed that.

Dave Rennie has not read too much into the 52-21 loss to the Barbarians though.

“I’ve seen the score. But the squad they bring over will be no resemblance to that group,” Rennie said.

“They had a lot of their key players playing on the weekend (in the English Premiership final). Once they name their squad I’ll take a bit more interest.”

Take a look at Tupou in the gym: