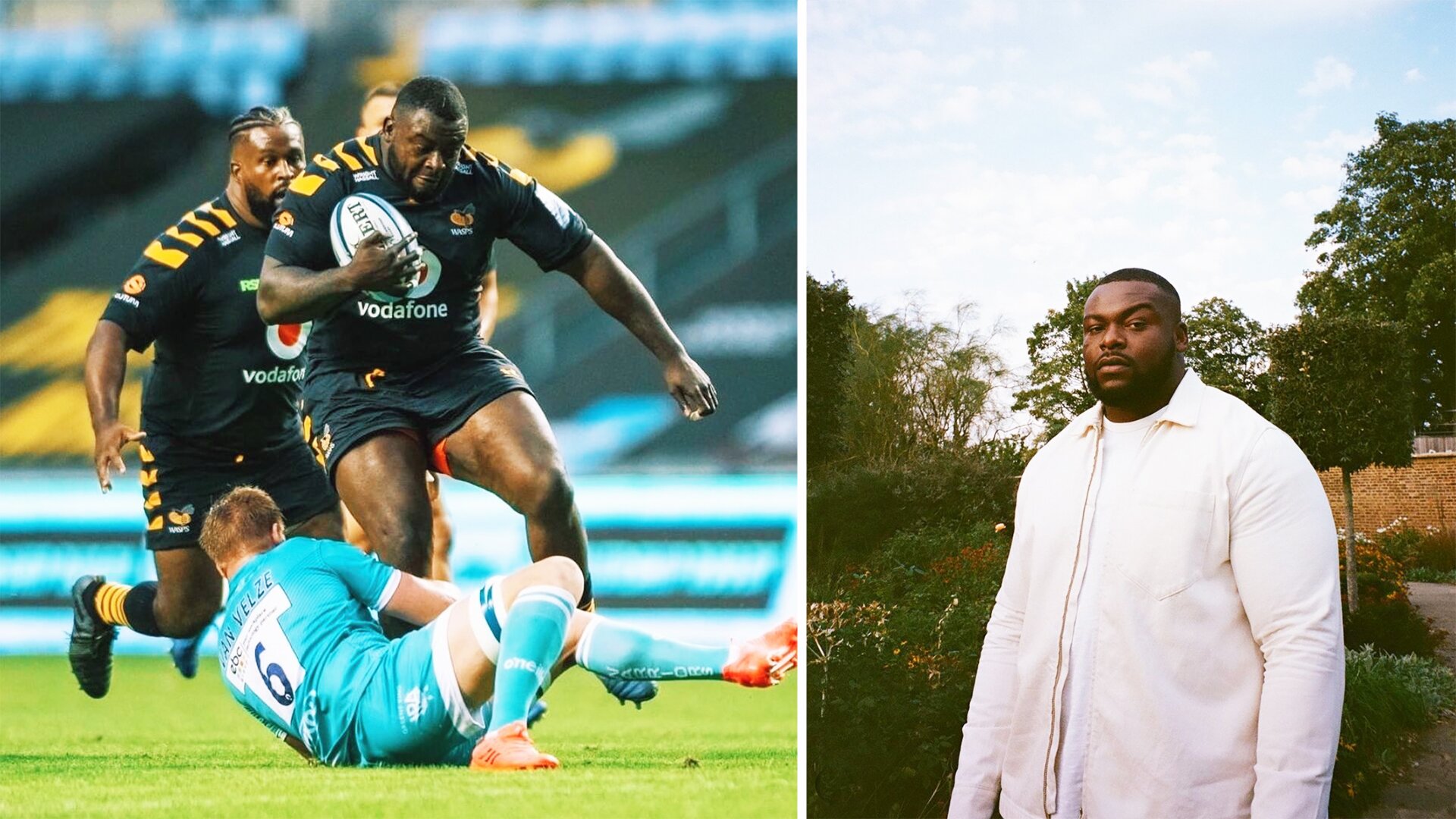 In February of 2019, Biyi Alo was playing for Championship side Coventry. Almost two years later and he has now just come to the end of an extraordinary breakthrough season with Wasps win which he played a starring role in their journey to the Premiership final.

Having come up through the Saracens academy, he moved onto to Worcester Warriors where he made 16 appearances for their 1st XV before making the move to Coventry.

After filling in initially as an injury replacement, Biyi Alo has cemented his position into the Wasps set-up but it’s not just the rugby field in which the man-mountain prop is marking his mark.

In a new interview with ‘WTALK‘, Alo talks about how he got into music and how it has become a massive outlet for him to express his true personality in a rugby environment where everything is incredibly streamlined.

Ohhhh so you don’t wana social distance from me but you wana emotional distance instead..!?! Saaaaafe 😒 💘Lovebow out now 💘 Available to stream on whatever platform you listen to your music on slap it in your playlists, send it to your lil boo, share with ur mates, all of that good stuff merci merci. [link in bio]

In this new video, he talks about how his journey into music started with him simply writing poetry and thoughts that he’d collate in his notes over weeks and months – eventually turning into music.

He released his first song in 2018 with trepidation.

‘I was hella nervous. I was saying this stuff – as a big guy I’m perceived as this tough guy and yeah to some extent – I don’t blame people for thinking that.’

‘I’m saying these things that nobody would have heard me say or that anyone would imagine I could say.’

Biyi Alo who goes by ‘Biyi’ in the music industry has already had success with his single, ‘Good Intentions’ which currently sits at over 300,000 listens on Spotify.

Biyi has continued on with his music since starring for Wasps in the Premiership this season. His newest release has come in the last fortnight titled, ‘Lovebow’.

The 26-year-old was once known as the heaviest prop in the Premiership weighing in at a whopping 24 stone whilst playing for Worcester. Since joining Wasps Alo has leaned up and with this physical transformation he has shot up the ranks in the Premiership pecking order.

With the delayed 2020 Six Nations finally completed last Saturday, it has now emerged that talks have already taken place about delaying the February start of the 2021 championship until next autumn in the hope that matches won’t have to take place behind closed doors.

Why was Antoine Dupont the #GuinnessSixNations Player of the Championship for 2020!?

The remaining four matches of the 2020 Six Nations were played without any spectators in attendance in Dublin, Llanelli, Rome and Paris over the past two Saturdays and organisers have already discussed whether it would be best not to begin the 2021 championship as planned on February 6.

A country such as Wales, who have home matches against Ireland and England, stands to lose upwards of £13.5million if those games go ahead with no-one in attendance.

Speaking to the Daily Mail, Welsh Rugby Union CEO Steve Phillips revealed plans are afoot for a potential delay. “We have posed the question, ‘should we move the Six Nations?’ Everyone has shown great agility in changing things.

“They did move the Olympics by a year, which is quite a thing to do, so why would you not look at it? Going from 100 per cent, as we have always known it, to zero would mean we miss out on £13.5m pounds. That does become uncomfortable,” he said, hoping that the UK Government will eventually come to the assistance of the financially stricken sport in the coming weeks.

“We’re optimistic Digital, Culture, Media and Sport will react to that over the next few weeks,” he continued before admitting pushing the championship later into 2021 could cause scheduling issues. “The difficulty is where you move it to. Moving it from starting in February to March, how do you know the climate will have changed and you can have crowds?

“If you push it too far you get the problem of season congestion, the knock-on on clubs. Given the size of the prize for the collective, you have to look at it whether you can deliver it is the next question.

“What you probably want to avoid is displacing it into the autumn window where we play southern hemisphere opposition. That isn’t great either. There is a wider social piece here. I had a surreal experience of going to the Stade de France the other week.

“It really brings home how much the game needs a crowd. The financials are obvious, but it’s a very different environment particularly in international rugby. It is just wrong not to have crowds.”

With Amazon Prime becoming the main broadcaster for the upcoming Autumn Nations Cup, it’s also believed that the Six Nations will likely move from free-to-air TV from 2022 as the cash-strapped unions seek out the support of the subscription broadcasters.

“There is an inevitability to it,” continued Phillips in the Daily Mail. “Everyone is now trying to fill revenue holes. I fully accept not everyone is going to like it but it’s a decision that will be made as the Six Nations together. Would we consider Sky, BT, Amazon for that? Absolutely.”