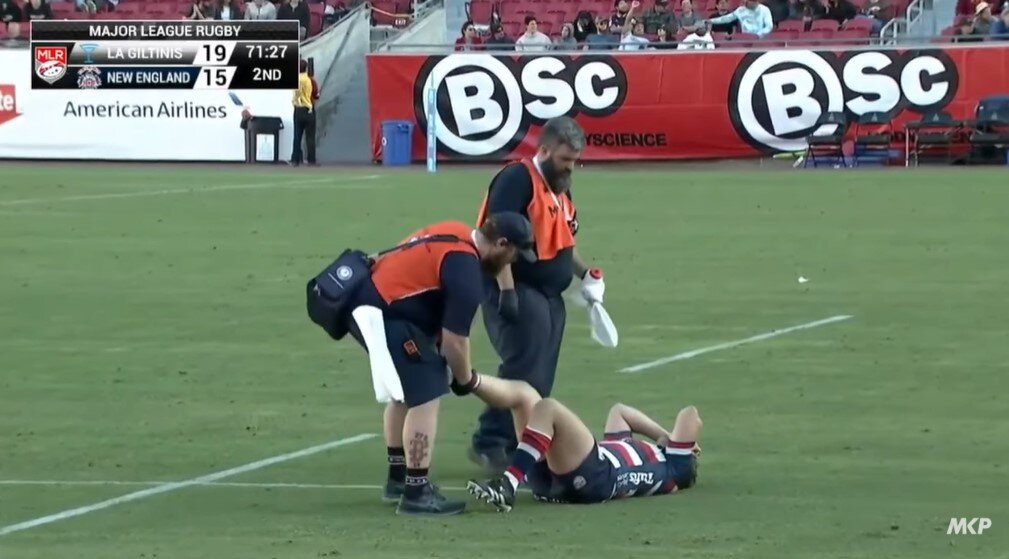 The worst case of cramp ever seen has hit an MLR player in the United States. The serious LA weather took its toll on players in the Los Angeles Giltinis versus New England Free Jacks match at that big old stadium in LA.

Is it the Olympic Stadium? Anyway, it all got too much for Free Jacks hooker Peter Jansen, who cramped up like a sausage. He’s from South Africa, so you’d think he could handle heat?

Muscle cramps can be caused by overuse of a muscle, dehydration, muscle strain, or just holding a position for an extended amount of time. However, in many situations, the cause is unknown.

Jansen was a dependable and crucial member of the Free Jacks front row last season, demonstrating his ability in the set piece. Pieter was a disciplined defensive player who finished the season with 119 total tackles, five of which were judged dominant. The South African hooker not only hit hard, but he also had a flair for finding the try-line, scoring four tries in 16 games.

This is what the Free Jacks said about the hooker last year: “Pieter enjoyed a strong debut season and we are delighted to have him back for a second year to see him continue to be a leader within what is a strong core of returning players,” Free Jacks Performance Director Tom Kindley commented.

“A top quality set piece operator, Pieter is also mature beyond his age and a fierce competitor. Lovingly referred to as the ‘old man’ of one of the team housing establishments last year, Pete brings with him a level of professionalism and leadership that he is respected for within the team and raises the standard of those around him.”

Jansen made a name for himself with the Emirates Lions during the 2019 and 2020 Super Rugby seasons, recording a total of five starts for the illustrious team. Jansen was a regular selection for the Golden Lions in the Currie Cup, South Africa’s best domestic competition, prior to his tenure in Johannesburg. Pieter made a total of 20 appearances for the squad, including 14 starts, and scored four tries.