The fall out from THAT Billy Burns kick seems to still be lingering after a video from World Rugby was taken over by trolls.

The video, released on the 4th June 2014, features an England U20’s team undergoing a drop-goal challenge whilst out at the Junior World Championship.

The post began trending again on Youtube with the English-born fly-half features heavily in the 2-minute clip.

Billy Burns was subject to a wave of abuse after the Six Nations clash between Wales and Ireland in Cardiff three weeks ago. The 26-year-old missed a vital kick for the corner that would have set up a try-scoring opportunity for the men in green.

Following the narrow loss to Wayne Pivac’s side, Burns was at the centre of a storm of negativity online.

Whilst his players and coaches rallied around him, the onslaught from some fans continued.

It now appears that some of Burns’ worst critics have sought to trawl back through old video content to launch abuse.

Some of the comments that were left on the 6-year-old video were unforgiving.

Here are some of the responses that were left on the clip from World Rugby.

“so you can find your mark when you’re wearing the colours of England then? Interesting’

“There was no pressure and he would prefer to play well for England. He’s just making the game plan bull***t.”

Billy finds his mark for England in 2014 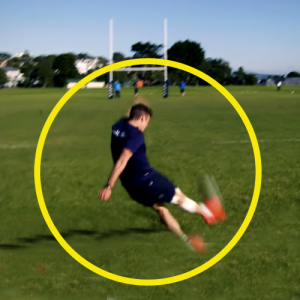 “You can’t even find touch with Ireland!”

“If only he dropped for touch”

Some fans were quick to support the young fly-half on the comment section of this video.

“One missed kick to touch and the creatures behind keyboards come crawling from under their rocks.”