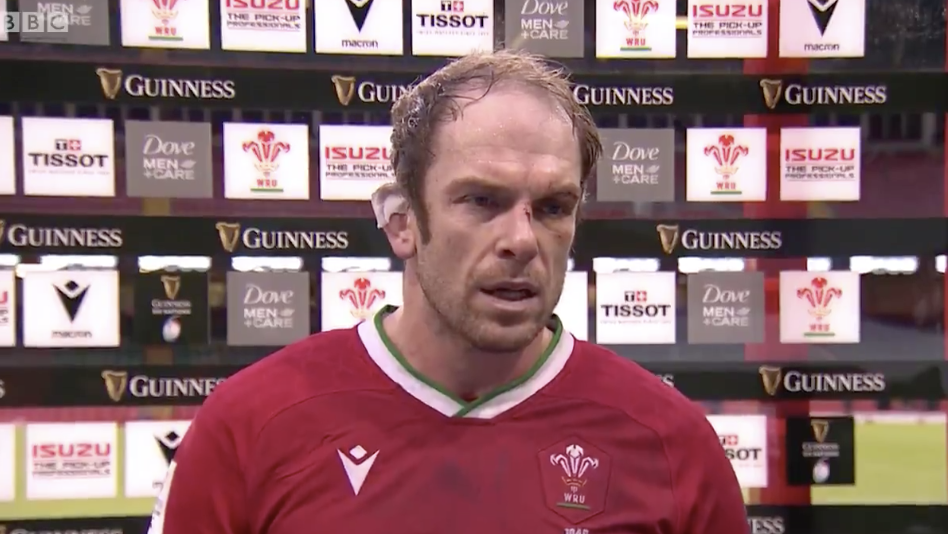 The 35-year-old lock had reportedly been involved in a training ground bust up with teammate Jake Ball this week, resulting on the test Lion sporting a black eye.

Wales overcame Ireland earlier by 21-16 after the men in green played much of the match with 14 men.

A late Louis Rees-Zammit try sealed the win for Wayne Pivac’s side in a fiery encounter in Cardiff.

Alun Wyn Jones was visibly pleased in his post-match interview with Sonya Mclaughlin, that was until he was asked in no uncertain terms a direct question about his black eye which was given to him by his fellow forward, Jake Ball.

watch the viral interview moment in the video below

There were a few other talking points in today’s clash in Cardiff which got fans talking.

Peter O’Mahoney was shown a red card for this ‘reckless’ clear-out challenge that was deemed to be to the head of a Wales player. With this sending off occurring in just the 13th minute of play – it certainly put Ireland on the back foot for the rest of the encounter.

watch the sending off offence in the video below

“If we’re looking after players… there’s only one option”.

Could there have been any other outcome for the “reckless” challenge that saw Ireland reduced to 14-men in Cardiff?#bbcrugby #sixnations #WALIRE pic.twitter.com/mvxXlQxKFb

Ireland didn’t give up the fight though and managed to finish the half strongly after this score from second-rower, Tadgh Beirne.

How a “little bit of fatigue” and “one missed tackle” combined to punish Wales late on in the first-half.

The extra man started to pay off for the men in red as the second half wore on. George North battered his way through the Irish line to record his 42nd try for Wales.

It was Louis Rees-Zammit who sealed the win for Wales,however, with this brilliant finish to score in the corner for Wayne Pivac’s side.