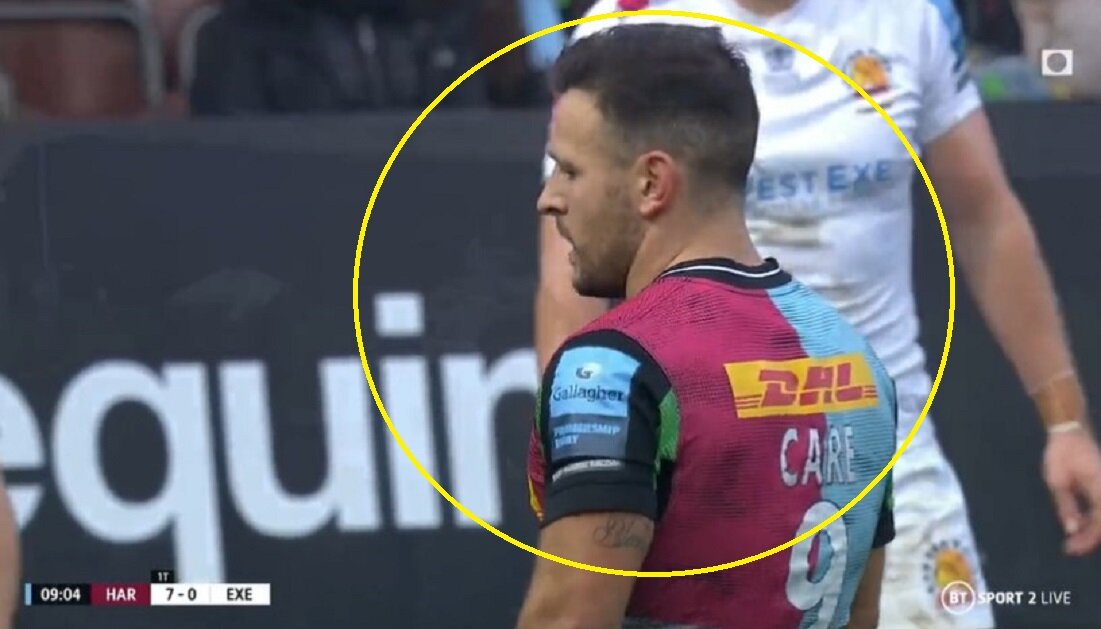 This is pure naughty from former England nine Danny Care, who should be back in Eddie Jones’ plans immediately.

Quins are hosting Exeter today and Care has been having a great game.

This appears to be a dummy-dummy from Care, who makes out like he is about to pop the ball to an inside man on a scissors, before giving it flat to backrow Jack Kenningham who gallops up the pitch.

Ugo Monye then says that Care was telling lies, which was accurate from Monye, his former Quins teammate. You can view it in the wonderful video below.

England’s second most capped scrum-half joined Quins in 2006 from Leeds, celebrated his 300th appearance for Harlequins earlier this season and has now scored at least 80 tries for the West London club.

A talismanic player, Care has been an ever-present in some of the Club’s all-time highlights. In his 15 years at The Stoop he has won two Premierships (2012 and 2021) as well as the European Challenge Cup (2011).

Care is enjoying another fantastic season with the Club, scoring loads of tries and creating many others with his brilliant invention and work-rate.

Holder of the second most appearances in the club’s history with 308 games, behind only fellow England and Harlequins legends Mike Brown (340), Care made his senior debut in 2006 against Gloucester.

Backs and Attack Coach Nick Evans said last year: “He has been, and still is, one of the best scrum-halves in the league. His experience and love for the Club is hugely important in an evolving squad with lots of talented and exciting youngsters.

“Danny has been exceptional on the field for many years and is universally loved and respected by the coaches, players and fans alike. He is a unique, extremely talented individual, and we are delighted to see him commit his future to the Club.”