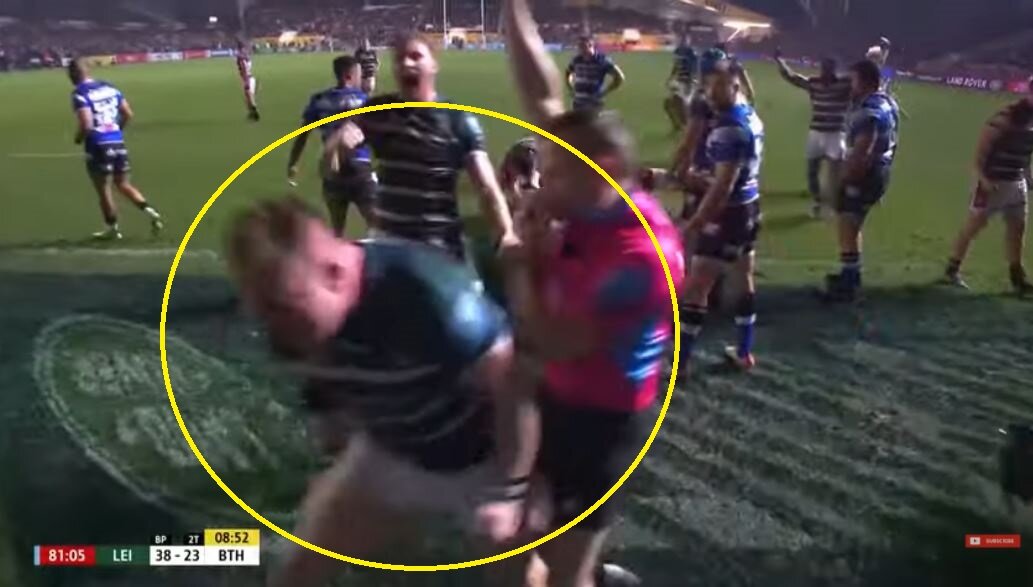 England prop Joe Heyes – who has two caps to date – went in berserker mode after Leicester Tigers scored the most forwards’ try of all time or something.

He shook uncontrollably, a strange prop dance that made Rugby Onslaught’s loins swell with arousal fluid.

Heyes, who made his senior club debut during the 2018/19 campaign as a replacement for Dan Cole in a Gallagher Premiership fixture at Wasps, came through the Tigers’ Notts Lincs and Derby development programme before joining the club’s academy in 2015.

As an academy player, Heyes represented England Under-18s and 20s before gaining promotion the Tigers development squad ahead of last season. He went on to make 22 senior appearances in his debut senior season and is currently in Argentina at his second World Rugby Under-20s Championship.

With a 40-23 win over Bath, Leicester preserved their perfect start to the Premiership season. George Ford scored 25 points.

With a show of enthusiasm and dedication that belied their league status, winless Bath forced the table-toppers to strive for an eighth straight victory.

Bath scored tries through Max Clark and Josh McNally, with Danny Cipriani converting both and scoring three penalties, but they remain in last place with only three points from their first seven games.

A Ford penalty gave Leicester the lead in the third minute. Nemani Nadolo’s two tremendous surges pushed the defense on the back foot, and when Bath were penalized, Ford knocked over a simple kick.

The visitors quickly countered with a well-crafted attempt. Bath took advantage of a Leicester line-out overthrow in their 22 when Cipriani’s well timed pass to Tom Dunn set up Clark’s try.

Will Muir was subsequently sin-binned for a deliberate knock-on, and the hosts took advantage of his absence by scoring a try through Dolly after an unstoppable line-out drive.