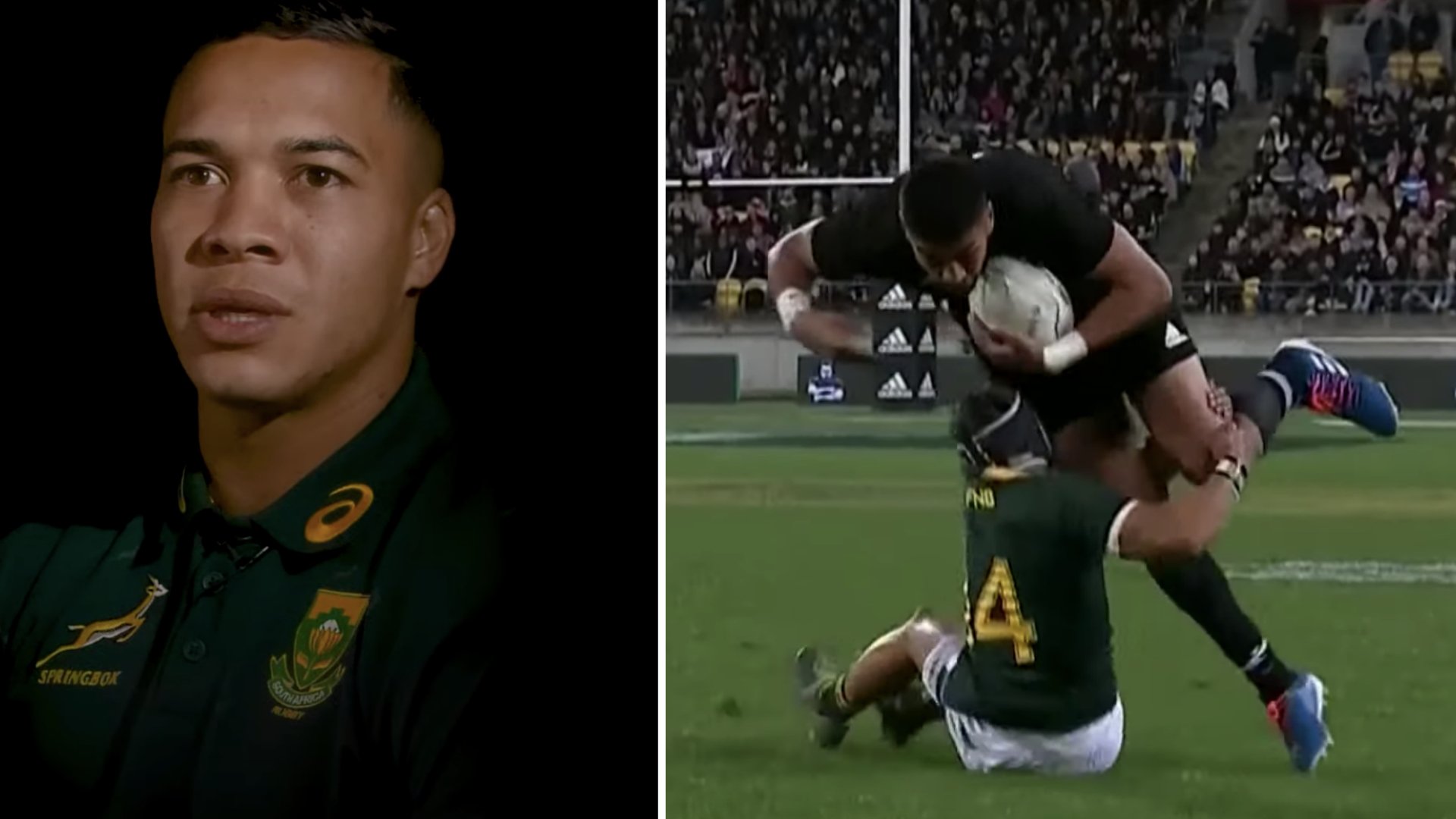 Every small person playing rugby should watch this

This was an incredibly inspiring video from the South Africa winger, talking about his rugby past and his experiences in rugby being a small man. He spoke about his selection for the Springboks.

“You don’t have to be the biggest player on the park, but there’s always way to tackle someone who is bigger than you”.

In an incredibly emotive interview, the Toulouse winger spoke of his shock about his South Africa selection saying, “don’t kid me… I just stood there like, ‘Are you really serious?”.

Kolbe highlights everything that is positive about South African rugby at the moment with his infectious passion and playing style.

He will be key for South Africa if they want to enjoy World Cup success in Japan this year.

World Rugby has announced that Du Randt will be joined by the New Zealand duo of Richie McCaw and Graham Henry, as well as Shiggy Konno (Japan), Peter Fatialofa (Samoa) and Diego Ormaechea (Uruguay).

“This is a wonderful way to recognise the career of one of the best Springboks to ever don the green and gold,” said Mr Mark Alexander, President of SA Rugby.

“He is one of only a handful of players to have lifted the Webb Ellis Cup twice, and the fact that he did it with an interval of 12 years between victories, speaks volumes about the man and his career.

“Os was revered as one of the best props of his generation and he anchored many scrums, not only for the Springboks, but also in the colours of the Cheetahs – whom he helped win their first Currie Cup title in 29 years in 2005 – as well as the Cats and Bulls.

Rassie Erasmus, Director of Rugby and a former team-mate of Du Randt, both with the Boks and the Cheetahs, said he first met the big front ranker fresh out of high school.

“We were in the same battalion in the army and what is the most amazing thing about Os, is that he has not changed one bit over the years, despite doing all the great things he’s done,” said Erasmus.

“We played together for the Boks, Cheetahs and the Cats, I coached him when he came back from retirement, then he won the Rugby World Cup for a second time – if there is one legend in South African rugby history, it’s him. What he’s achieved is simply incredible.”

The World Rugby Hall of Fame presented by Tudor recognises those who have made an outstanding contribution to the game of rugby throughout their careers, while also demonstrating rugby’s character-building values of integrity, passion, solidarity, discipline and respect.

The six inductees will be honoured at the World Rugby Awards at The Prince Park Tower in Tokyo during a night dedicated to the game, with important members of the rugby family.

While Fatialofa and Konno will be inducted posthumously, McCaw, Henry and Ormaechea will attend the prestigious event, which will celebrate their careers and contributions to the game. These six inductees bring the total in the Hall of Fame to 148 since it began in 2006.

World Rugby Chairman and Hall of Fame inductee Sir Bill Beaumont said: “Our beloved game of rugby would not be what it is today without the contributions of remarkable trailblazers, men and women, who form the World Rugby Hall of Fame. They are players and coaches, true legends of the game that have embodied our values and will continue to inspire generations to come.

“On behalf of the rugby family, I would like to recognise and celebrate the outstanding achievements of this year’s six new inductees, Richie McCaw, Shiggy Konno, Os du Randt, Peter Fatialofa, Graham Henry and Diego Ormaechea for their outstanding career and thank them for their immense footprint on our game.

“We look forward to honouring them in November at what promises to be a very special night.”

Fellow World Rugby Hall of Fame inductee and Chairman of the Hall of Fame panel John Eales said: “It is an honour to recognise the contribution of our newest inductees who, over different eras and regions, have inspired millions of rugby players and supporters. Through their induction, they represent the many thousands of men and women who have made our game great.”

For more information on the World Rugby Hall of Fame, visit www.worldrugby.org/halloffame.