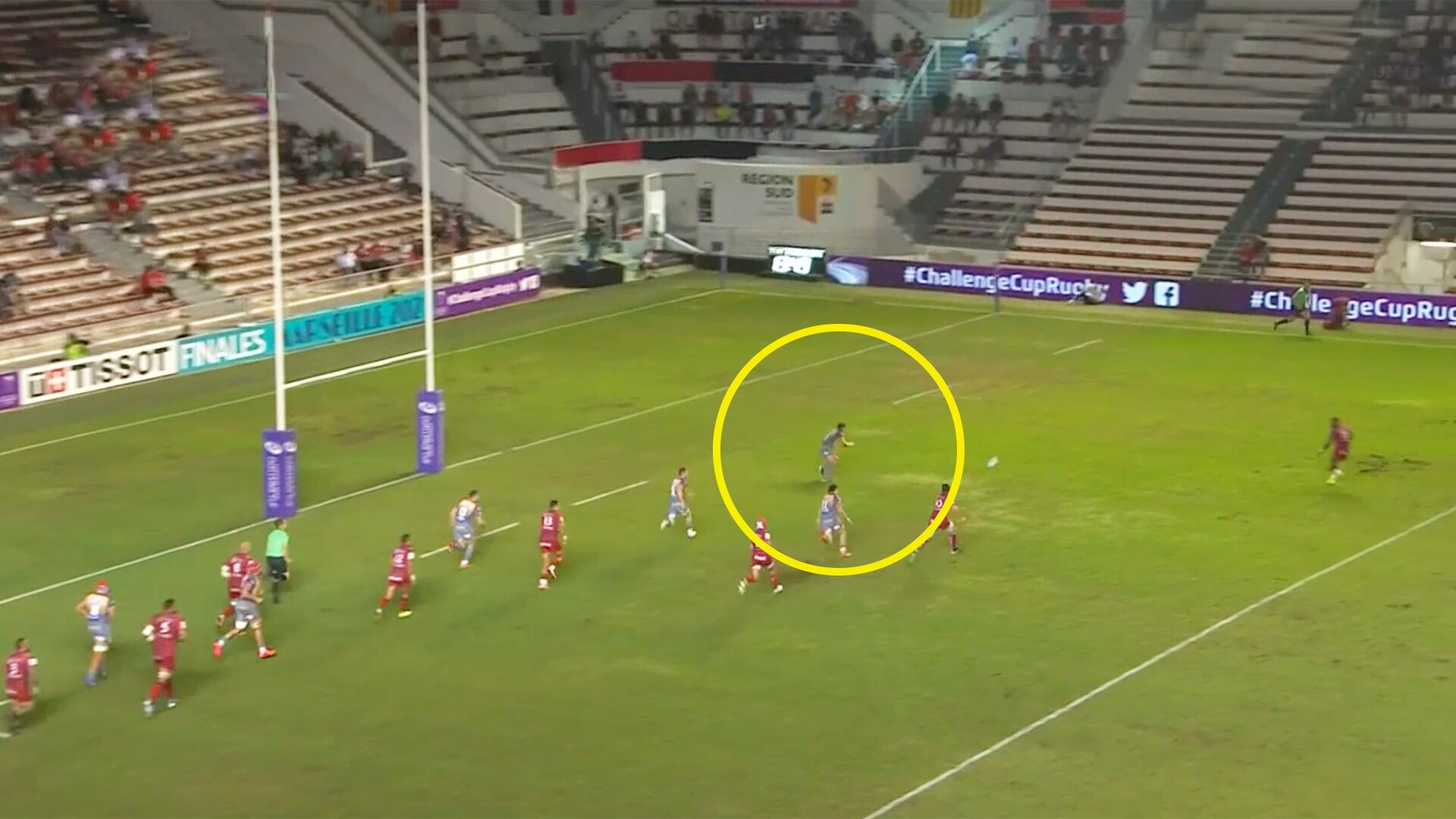 Toulon hosted Scarlets last night in a close-fought Challenge Cup quarter-final. Toulon won – but it was Leigh Halfpenny of the Scarlets who stole the headlines.

Fans have been raving about this tackle in the 13th minute that many are calling one of the best covering tackles of all time.

The final score stood at 11-6 with the French hosts going through but the Welsh full-back was the best player on the pitch for many viewers. Here’s what fans on social media had to say about him.

I cannot emphasise this enough – WHAT A TACKLE from Leigh Halfpenny.

I would like you all to know me and that tackle by Leigh Halfpenny are now engaged and getting married in the spring.

Have been watching that Leigh Halfpenny tackle on repeat during half-time. A thing of absolute beauty.

Leigh Halfpenny again proving why he’s the best defensive 15 in the world. What a tackle.

Leigh Halfpenny, having admitted to being shocked at being sacked by Toulon, must have loved that tackle and the two penalties.

Fans were raving about the overall performance of Leigh Halfpenny but this tackle was the focal moment in what was a majestic display from the Scarlets man.

Take a look at the incredible try-saving tackle from last night’s Challenge Cup clash below.

In case you’ve missed it – here’s THAT Leigh Halfpenny from last night pic.twitter.com/ENoSTeBmu9

‘The best No 7 in New Zealand’: Exceptional Ranfurly Shield performance reignites calls for a change to the All Blacks squad

The Ranfurly Shield, one of the most revered sporting trophies across the globe, is once again heading north from Canterbury to Taranaki.

Saturday’s challengers, boosted by All Blacks Tupou Vaa’i and Beauden and Jordie Barrett, built a 20-3 lead at halftime and despite a spirited comeback from Canterbury, Taranaki held strong to claim a 23-22 win.

Lachlan Boshier confirms he is the best No 7 in New Zealand. #CANvTAR Surely ABs will right a wrong and pick him for TRC.

The holders weren’t exactly light on firepower either, with Joe Moody, Codie Taylor, Sam Whitelock, Richie Mo’unga and George Bridge all on deck for the game.

It wasn’t any of the All Blacks that captured fan’s attention, however. Instead, it was a man that was overlooked for Ian Foster’s first national selection who would have received his fair share of pats on the back after the game.

Chiefs and Taranaki loose forward Lachlan Boshier, who was such an exemplary performer throughout Super Rugby this season, re-announced himself to Foster and his co-selectors with one of the finest openside flanker performances of the modern era.

Boshier has always been a reliable pilferer but the 25-year-old has impressed in 2020 with the timing of his steals – often, when his opposition are hot on attack and threatening the line

In Saturday’s Ranfurly Shield clash, Boshier earned no fewer than five breakdown turnovers. The last – and possibly most important – came in the final minute of the match with Canterbury into their 16th phase of play and just eight metres out from the Taranaki tryline.

It was a match-winning play and just one more indication of how imperative it can be to have an out-and-out fetcher playing in the loose forwards. While Boshier has played his fair share of Super Rugby matches, a Ranfurly Shield match with All Blacks available is perhaps the highest pressure environment in which the openside flanker has flourished.

How on earth is Lachlan Boshier not in the All Blacks squad? No need to have Cullen Grace, Akira Ioane and Sotuto in the same squad. Boshier is a turnover monster #CANvTAR

Punters throughout New Zealand were gobsmacked when Boshier was omitted from the North Island matchday squad for their clash with the South Island earlier this month and although his absence from the All Blacks was telegraphed, many were still disappointed when Boshier wasn’t announced as one of the nation’s potential new caps.