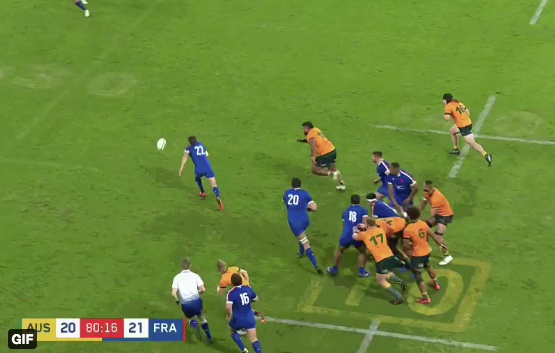 Wallabies fans must be pinching themselves after their side managed to come away with a 23-21 victory over France today in Brisbane.

The visitors were searching for their first win against the Wallabies on Australian soil in the professional era, and even though it was a weaker side, they dominated most of the game and were leading throughout.

Les Bleus were leading 21-20 in the final minute of the match and won a penalty which looked like it had sealed the victory. They kicked to touch and had a lineout in the final play of the game, and then this happened:

All France had to do was kick the ball out, or even run the ball dead after winning the lineout and they would have won the match. Instead, they gave the ball away and had to defend on their line, eventually giving a penalty away under their sticks to lose the match.

This was one of the craziest finishes in recent years in Test rugby, and proof that France just cannot clinch vital wins despite the depth and class they have in their squad. They in no way should have lost this match, but yet again have blown it.