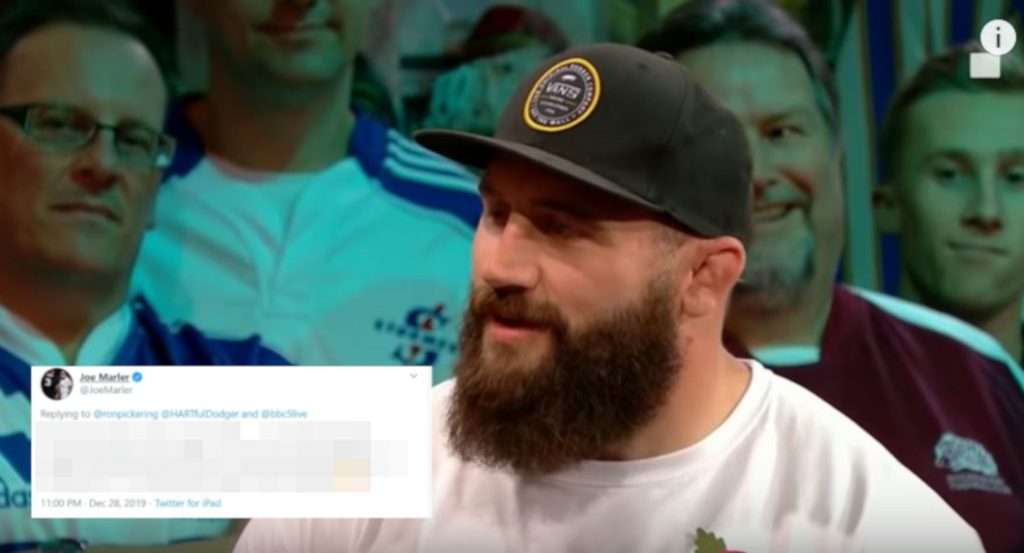 England prop Joe Marler has more or less ended a Twitter person with x-rated ‘mum joke’ in a Tweet so rude it needs reinforced suspension.

In a reply to the appearance of Joe Marler on a BBC 5 Live show, a Tweeter observed that he thought the prop was a “absolute try hard weapon……….him not you obviously”.

Problem was that Marler was tagged in the Tweet and duly decided to reply.

“Very true mate. I try very hard……. to have regular vaginal intercourse with your mum, but she insists on having it in her arsehole every time! Mental.”

It more or less ended it there, with most enjoying the old school mum joke, with only a few apparently offended (some sort of Twitter miracle).

Marler, a Harlequins Academy graduate, has become a world-class loosehead prop since establishing himself as a senior squad member in 2010.

The charismatic prop was part of Harlequins’ Amlin Challenge Cup and Aviva Premiership winning campaigns, scoring a pivotal try in the 2012 Premiership semi-final against Northampton Saints.

In 2016, he was part of England’s Grand Slam-winning campaign and played a significant role in securing back to back Six Nations titles in the 2017 tournament.

Marler was named in the 2017 British and Irish Lions squad to tour New Zealand. Making his debut against the Provincial Barbarians, he represented the prestigious side on five occasions during the midweek matches.

In 2017 Joe Marler extended his deal by a further three years, keeping him with Harlequins, his only club, until at least 2021.