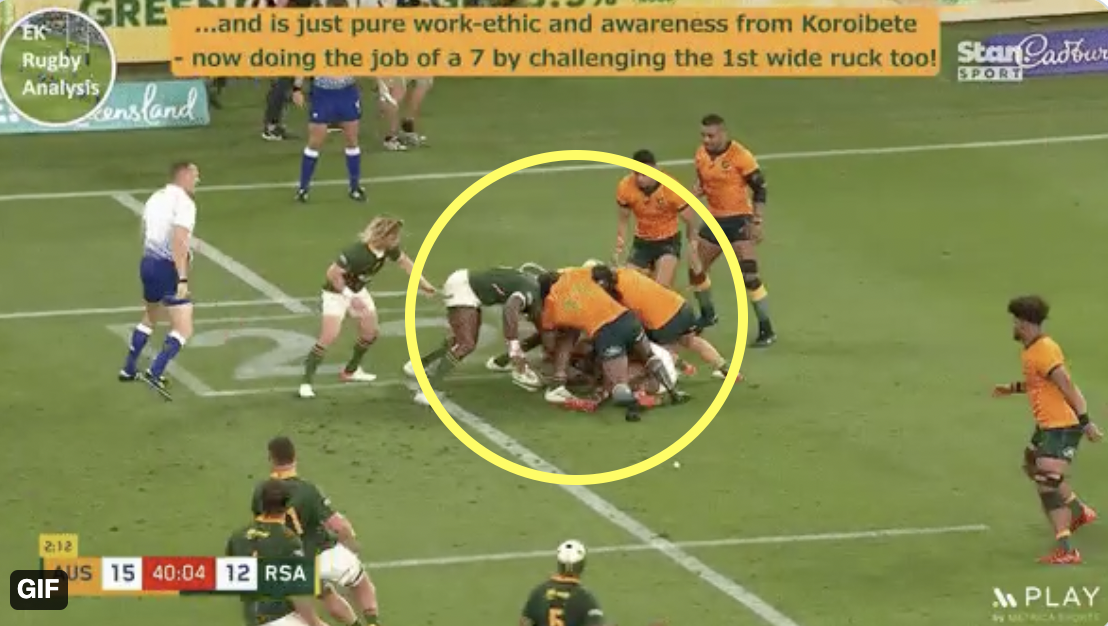 Australia were firm underdogs going into their two matches against South Africa this Rugby Championship, but Dave Rennie’s side have produced back to back Herculean efforts to topple the world champions.

All of the Wallabies’ players have stepped up over the last two weeks, producing monumental efforts. Michael Hooper did what Michael Hooper does best against the Boks, covering every single blade of grass on the Gold Coast and Brisbane pitches. Samu Kerevi was another equally impressive performer, consistently denting the much vaunted Bok defence, while Marika Koroibete was monumental in attack and defence.

While the Australian speedster is famed for what he can do with ball in hand, a his defence has been singled out after the victory on Saturday, with one effort being noted in particular.

With Australia down a man in the final minutes of the first half following No6 Lachie Swinton’s yellow card, Koroibete was packing down at blindside flanker for a scrum on their left side of the field. As the Springboks worked the ball wide, the winger was forced to cover the back field on the other side of the pitch as the fullback joined the line. Following that, he hit the ruck and was able to force a turnover for his side. This was a superhuman effort from the 29-year-old and he was rewarded with a turnover.

The impressive 30-17 win in Brisbane meant the Wallabies have now risen to third in the world rankings, behind South Africa and the All Blacks, and are only a point behind the Springboks in the Rugby Championship. With two matches now to play against the winless Argentinians, Rennie will be hopeful that his side can finish the Championship on a high and secure a second place finish.