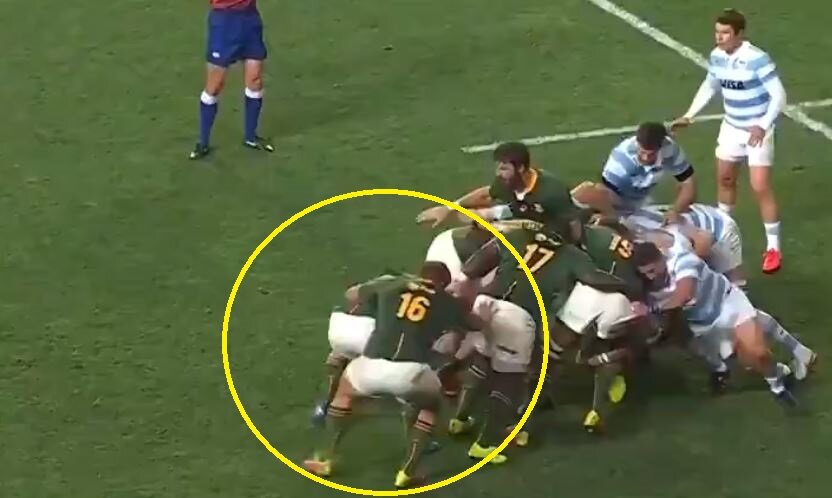 Springbok wrecking ball Marco Van Staden is a beast and Leicester Tigers will be licking their lips at the prospect of him playing at Welford Road this coming season.

Van Staden, who has made three Test appearances for South Africa, will join Tigers from Super Rugby side The Bulls.

Discussing his move, the back-rower said: “I will give everything towards what the coach expects of me. I like the physical parts of the game and will do my best to add to the team in those areas.

“I believe the style of the game in the Premiership suits me, in the physical battles, and I am really looking forward to playing that style of rugby at Leicester Tigers.”

Here he is running through two defenders.

The Tigers have been loading up on South African back rows for some time with Jasper Wiese and Hanro Liebenberg already at the club. All three are hard-hitting ball carriers.

Van Staden, more affectionately known as Eskom by his peers (for putting a few lights out over his career), quickly became a crowd favourite with his intense work rate and insane physicality on the field.

He excelled through the junior ranks at Loftus, working his way up and earning 29 Vodacom Super Rugby caps and featuring in 18 Carling Currie Cup matches. Add to that three appearances for the Springboks, and its safe to say that the young man has had an electrifying start to his career.

Jake White, Director of Rugby at the Vodacom Bulls: “Marco is a phenomenal player, and is probably one of the most complete number 6s in the world currently. Situations like these are always met with mixed emotions, I never want to lose a player of his caliber, but I’m also excited and proud of the player he has become. We wish him all the best with his journey ahead and know he will grow from strength to strength and will be a massive asset for Leicester.”

Van Staden humbly thanked the Vodacom Bulls, “My time at Loftus has been amazing to say the least. The Bulls have always backed me and helped me grow as a person on and off the field. I will forever be grateful for the opportunities and lessons from the #BullsFamily. To each and every person that has impacted my career thus far, the guys that I played with, the coaches and management, and the staff at Loftus, I sincerely thank you. I may be moving on, but I truly hope that our bond will remain.”