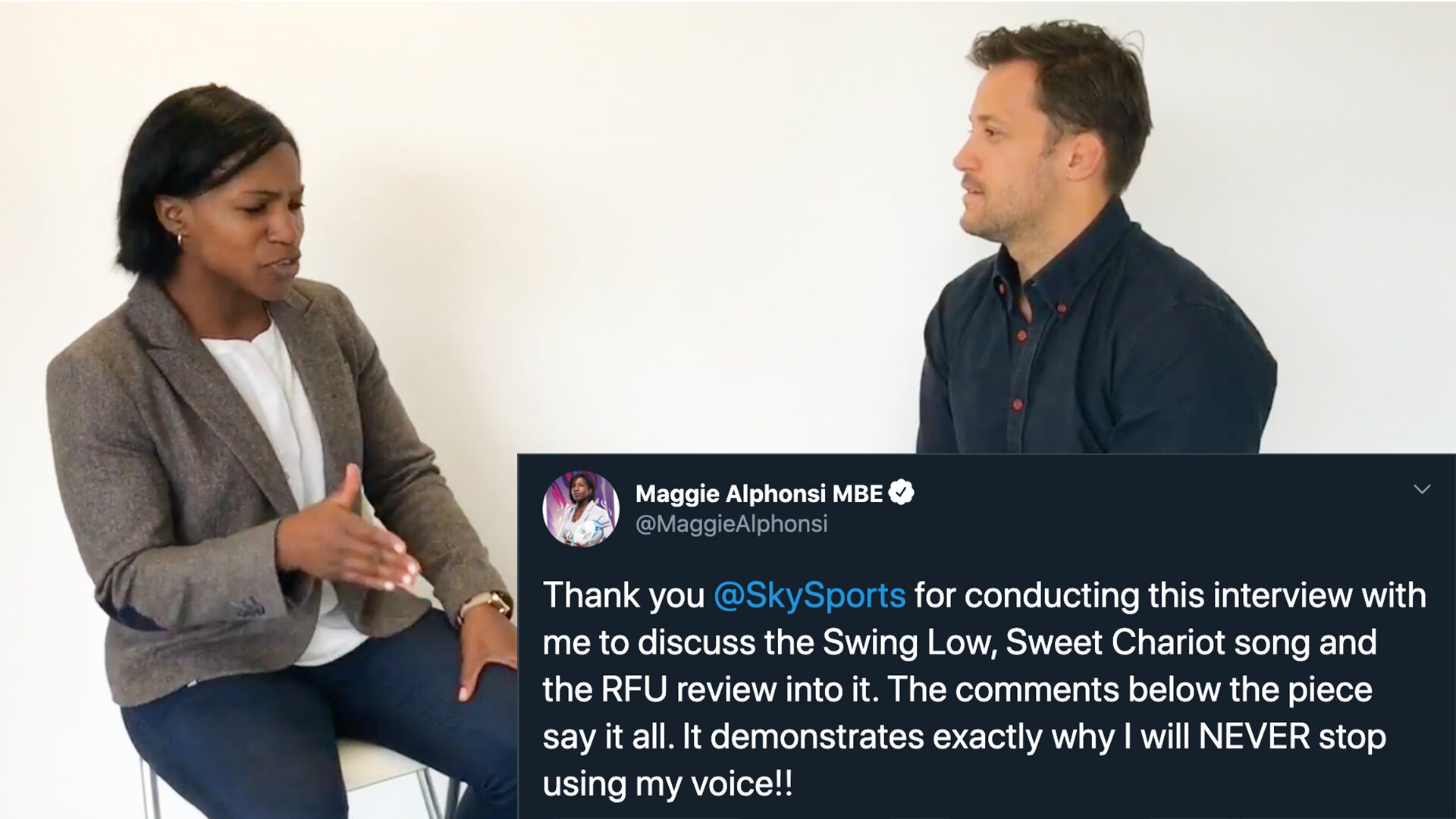 Former England women’s captain Maggie Alphonsi has hit back at abusive online Twitter trolls who commented on a Sky Sports interview she conducted earlier this week.

Thank you @SkySports for conducting this interview with me to discuss the Swing Low, Sweet Chariot song and the RFU review into it. The comments below the piece say it all. It demonstrates exactly why I will NEVER stop using my voice!! https://t.co/qmMUiAHmkL

Alphonsi said in the interview that she had stopped singing the Swing Low, Sweet Chariot song after she had learned of it’s origins but that she didn’t want a ban to be enforced on the popular tune sang at Twickenham regularly.

After Sky posted the interview on their twitter – trolls immediately descended on the comments thread with abusive messages towards the former England skipper.

The tweets below are far from the worst we saw…

Alphonsi’s tweet was also met by an avalanche of support after her tweet with many commending the England skippers bravery.

There has been huge commotion recently about the potential banning of the song with even Boris Johnson weighing into the debate.

The UK Prime Minister said he didn’t believe that England’s unofficial rugby anthem,’Swing low, Sweet Chariot’, should be banned from the terraces, following news that the RFU are to review it’s place in the game. The song, which has links with slavery, was apparently first heard at Twickenham in 1987.

Johnson, who played rugby in school and regularly attends matches at Twickenham, believes that the focus should be on celebrating achievement, and not looking to ban songs or pull down statues.

“My only thought about this whole issue is, frankly, what people need to do, I think, is focus less on the symbols of discrimination or whatever, all these issues that people are now raising, to do with statues and songs and so on,” he said in an interview with Sky News during a school visit on Friday.

PM asked about Swing Low, Sweet Chariot after England rugby bosses say they're reviewing use of the song due to its links to slavery

“I can see why they’re very emotive, I understand that. But what I want to focus on is the substance of the issue,” the prime minister went on. “I want to make sure that this is a society where people can advance on their merits, achieve fantastic things and don’t face prejudice or discrimination.”

“I certainly don’t think there should be any sort of prohibition on singing that song. My curiosity is why don’t people seem to know the rest of it – I’d love to hear the rest of it.”

We’ll keep you updated on this story as it develops.