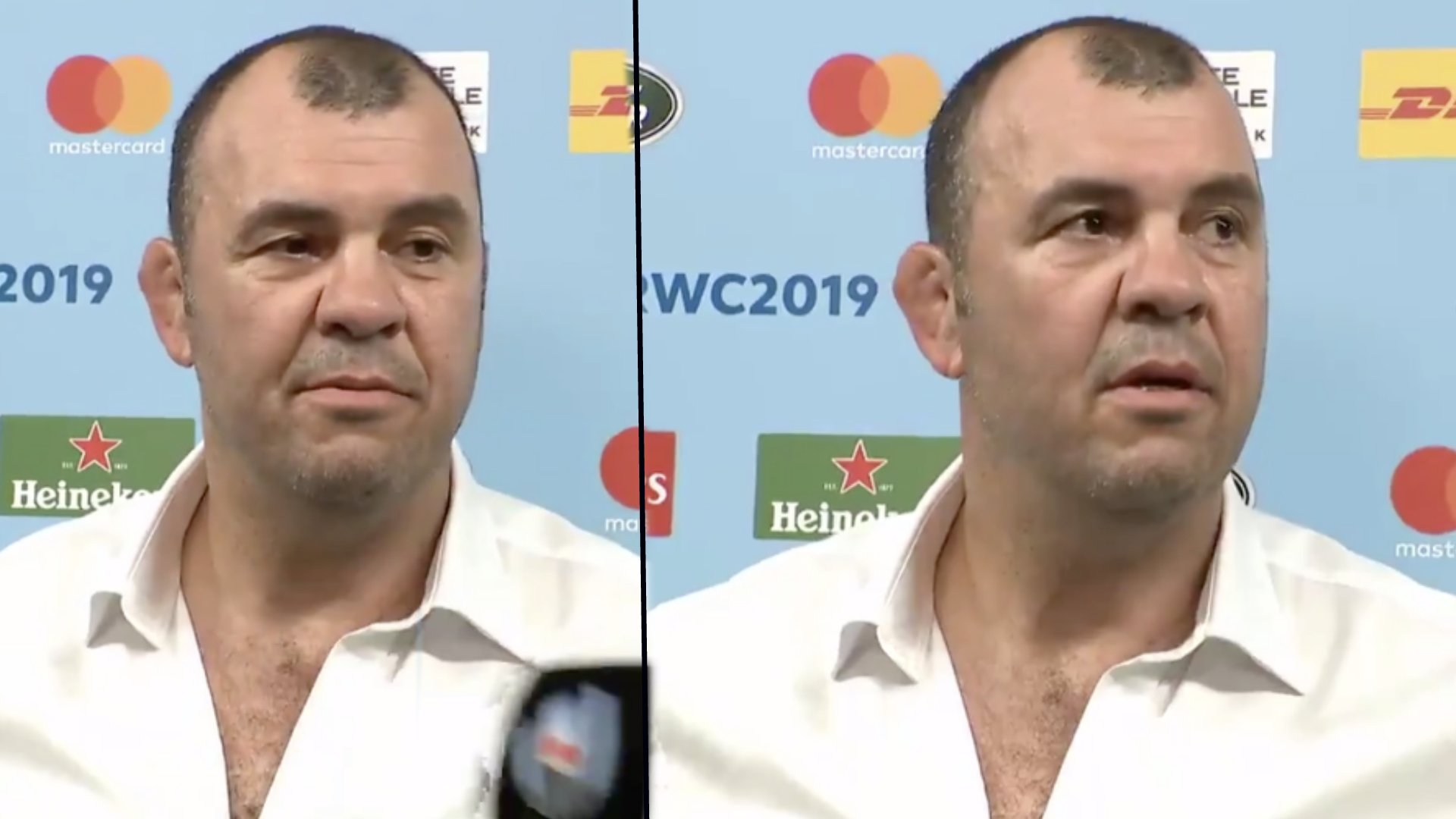 Michael Cheika was clearly not very happy at all after Australia narrowly lost to Wales in a brilliant Pool D clash in Tokyo.

The interviewer for World Rugby pulled him aside a few minutes after the full time whistle and it was clear the the Australian coach had absolutely no interest in being interviewed by the plucky interviewer.

Cheika is famed for his mid-game freak outs on the coach cam, we all know he can be a bit of a loose canon when the games are close.

Look at how awkward this interview is. Him pulling down the microphone, can tell he wanted to unload on someone.

"Any positives we take we'll keep to ourselves…"@wallabies head coach Michael Cheika gave his thoughts after his sides first loss at #RWC2019#AUSvWAL pic.twitter.com/BcAb1KNvCA

The game was a very controversial affair especially with the tackles, as Australia were pinged on many occasions for going into the tackles with forearms which many Australians were not happy with.

Cheika made a name for himself as a fiery character last year with this rant at his team when they were down to Argentina.

Australia legend Matt Giteau took particular exception to this, saying that it is ruining the game.

Not happy at all, another ex-Wallaby player knew that Cheika would bring the good come his post-match interview.

Many took exception to his post-match interview, branding him arrogant.

Cheika seems to think he’s a lot smarter than he is. The arrogance in post match interviews when he loses is baffling. You’ve buried this country deep in mediocrity you clown, be humble. #AUSvWAL

Australia now look like they won’t top the Pool. Which means they will most likely face the winner of Pool C, which could be Argentina, France or England…

South Africa’s 57-3 dismantling of Namibia ticked a few boxes for Rassie Erasmus, SA Rugby’s director of rugby, but a critical showdown looms with Italy on Friday.

Erasmus gave his team a qualified pass mark in the nine-tries-to-nil victory – the biggest by any team at the Rugby World Cup to date – but he acknowledged that not too much should be read into it.

“For us, overall, a few boxes were ticked but certainly a lot of work still to do,” he said. “We’ve now got a crunch game – a really important game – against Italy.

“We always said before the World Cup that there were four really important games in the tournament – beating one of New Zealand or Italy in the Pool and then the three play-off games – quarterfinal, semifinal and final. There’s lots of work ahead.”

The much-changed Springbok team – showing 13 changes to the starting XV – led 31-3 at halftime in front of 36 449 fans at the impressive City of Toyota Stadium.

Makazole Mapimpi and Bongi Mbonambi each scored a brace of tries while there were others for Lukhanyo Am, Warrick Gelant, Siya Kolisi, Schalk Brits and Francois Louw.

Erasmus said: “We needed to bounce back with a win and we got that with five points so that was important and that was a positive.

“But in the same breath you could see that Namibia was probably targeting the Canada game and they were resting a few players so, by no means are we getting carried away. We are realistic on where we are and what we have to do.

“They really came for us physically very hard. We might not have had a really hard tactical challenge in this game but physically we were challenged.

“A lot of people will point fingers and say it wasn’t a great performance but at least it was a physical challenge. Some guys got some match fitness and we got some log points out of this and now we’re a little bit better prepared for the Italy match.”

Erasmus also noted how much the Tier Two nations had improved.

“Japan beat us and now they’ve beaten a team like Ireland so there’s a responsibility on us to play these games as hard as we can to make teams like Namibia see where they are and where they must improve.”

Erasmus also highlighted the difficulty of the handling in the humid conditions, which, he said, he had forecast could lead to upsets in the pool stage – such as Japan’s victory over Ireland earlier in the day.