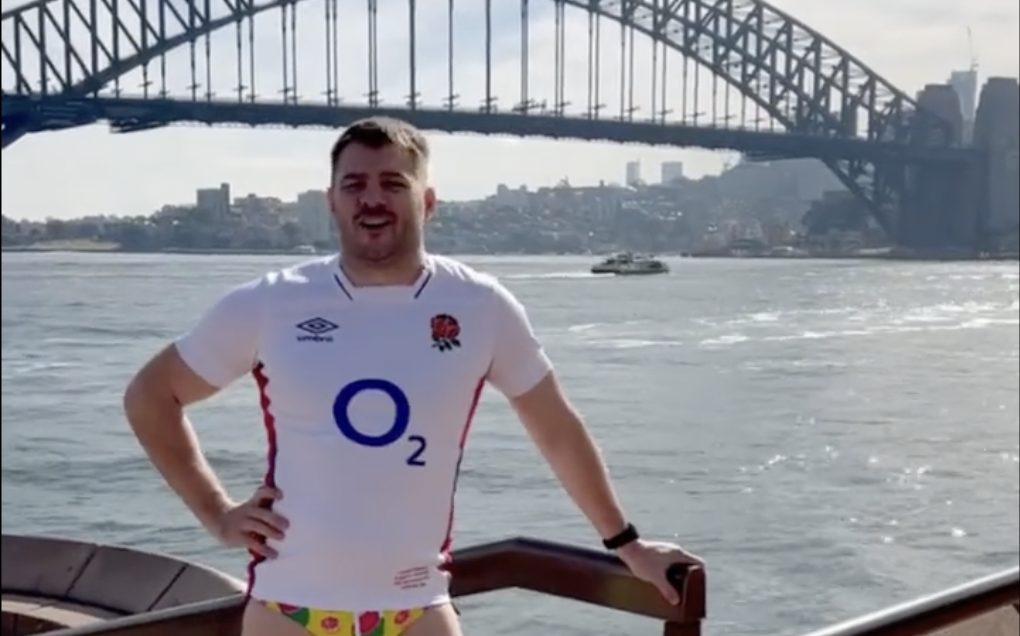 Former Australia winger Drew Mitchell has been true to his word this week having previously made a rather embarrassing bet with England prop Joe Marler about the outcome of the second Test between their respective nations.

England came out on top in Brisbane on Saturday 25-17, but there was much more on the line for Mitchell and Marler.

After England’s loss in the first Test, the Harlequins loosehead made a wager with the former Wallabies back on Twitter, saying “Loser walks down street, opposition jersey on top, budgies on bottom, singing opposition national anthem….. full blast, no half hearted s**t?”

Mitchell responded: “If Wallabies lose next week, I’ll wear an England jersey on top, Budgy Smuggler on the bottoms and belting out ‘God save our Queen’ up Caxton street. May the worst man embarrass themselves haha.”

Well Mitchell was true to his word, sharing a video of himself on Tuesday clad in an England shirt and Budgy Smugglers, reciting the English national anthem around various sites in Sydney on what looked to be a cold day. One thing that can be concluded from the video is that Mitchell chose the right career playing rugby rather than singing, although it does beg the question as to whether he was ever actually listening to England’s national anthem on the eight occasions that he played them.

Mitchell wrote on Twitter this week: “Ok!! It’s time to pay my debts!! Congratulations Joe Marler on your winning bet & England Rugby for squaring up the series. “No half hearted s**t!” Well I trust this means we are all square??”

He also said at the end of the video that Marler can make a bet with someone else next time as “he’s done”. With the series in the balance now heading into the third Test in Sydney, it would take a brave man to make another wager like that.

Congratulations @JoeMarler on your winning bet & the @EnglandRugby for squaring up the series.

“No half hearted shit!”

Well I trust this means we are all square?? pic.twitter.com/iQN5QA9bnS