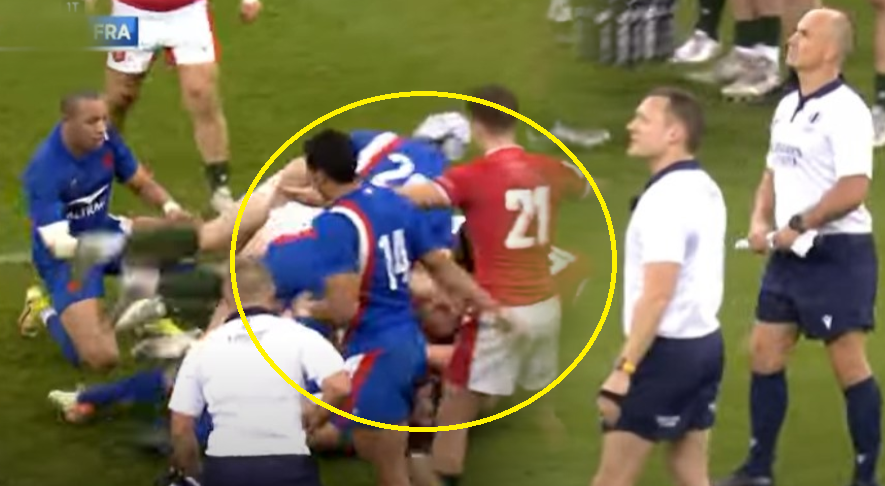 Many think France got away with clear red card incident

So Duhan van der Merwe gets a red card for a poorly executed handoff in the Gallagher Premiership and this WWE power slam in the Six Nations and it’s just a penalty?

Nearly everyone online – and not just Welsh people – are making the argument that France got away with a clear red card for this incident.

Wales wing Josh Adams is inverted by Thibaud Flament, with the Frenchman seeming to use Adams’ cobblers as a handy hold to execute the WWE savagery. Shades of Marler-Alun Wyn Jones anyone?

Thing is though he lands on his bum so maybe that is why the referee didn’t think it was that dangerous after all?

Thibaud got a penalty for it but some are claiming it was should have been red.

Have a watch yourself and see what you think.

Could Wales have won with a red? Quite possibly. Look at the Duhan van der Merwe red.

Dan Biggar was sad that they lost.

“I’m frustrated, annoyed, disappointed – all those things. We said in the huddle after the game that we could have nicked it in Twickenham a couple of weeks ago, coming back after not starting well.

“I thought tonight we were the better team against the best team in the world at the moment.

“Big Test matches hinge on one or two big moments. We didn’t quite nail ours and France took theirs.”

The Six Nations Championship is the oldest international rugby tournament in the world, dating back to its original incarnation in 1883 and expanding to its current format of six teams in 2000. It consists of three highly competitive annual tournaments across men’s, women’s and U20s rugby.

In its day-to-day operations, Six Nations Rugby is guided by the core values of courage, solidarity, inclusion, integrity, and creativity. Together with its unions and federations, Six Nations Rugby is committed to the development of rugby at all levels, as well as working with other governing and representative bodies around the world to ensure the best possible future for the game, its players and its fans.