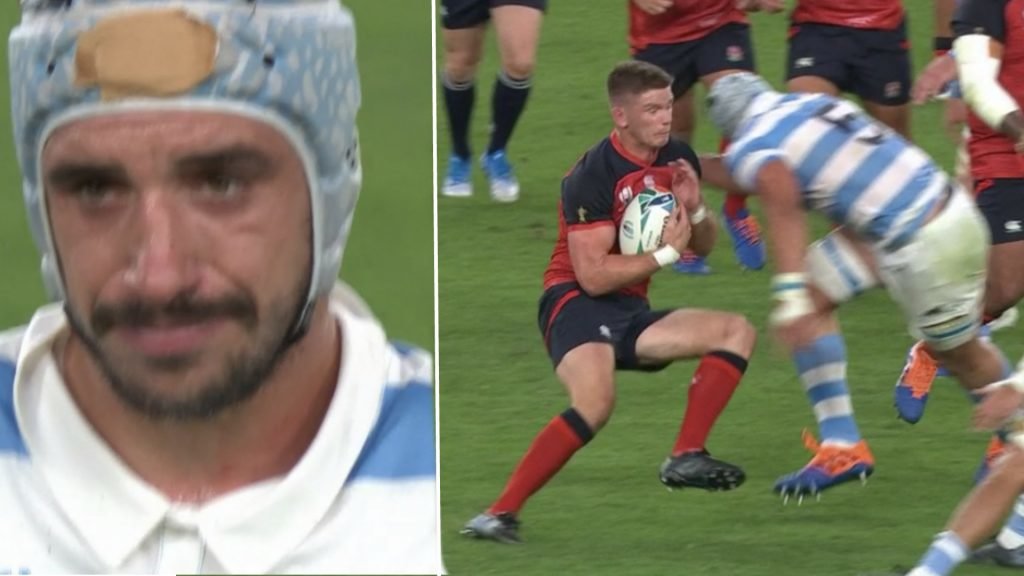 What a massive hit this was in the England vs Argentina match. In a tournament where tackle technique has been heavily under the microscope, these hits were always going to be on the cards. War hit mania.

Farrell again was the victim in the massive hit where he could have easily been injured with this massive challenge.

Argentine enforcer Tomas Lavanini has made a reputation for himself as a bit of a loose cannon on the pitch and this showed that right here. Getting a red card with this WAR hit and putting his teams World Cup campaign in jeopardy.

Twitter wasn’t happy at all with the challenge on Farrell…

If we want players not to suffer brain injuries on a rugby field then those tackles absolutely HAVE to be red cards. Tough on players but essential.

They are professionals who are paid to do this job, so they must learn & adapt or they cannot play. That’s it. #ENGvARG #RWC2019

This photo is doing the rounds on twitter comparing Lavanini’s tackle and Piers Francis, like I said at the time I thought it was a worthy of a red card…. #ENGvARG #RWC2019 pic.twitter.com/J9UMnvTcqj

That’s ruined the game. Feel for Lavanini but Owens had no choice.

Well that may well be the end of that for #argentina.
Discipline is key in this @rugbyworldcup. Poorfrom argentina

People online have been debating tackles constantly over the first 16 days of the World Cup, with many arguing that refs are now under so much pressure to make sure that they’re making exactly the right call even in the heat of the moment.

Many will remember that Owen Farrell was on the end of another nasty challenge from the USA last week, it has started a maelstrom of discussion online about the fact that Farrell himself loves a good war-hit with his shoulders.

Lavanini looked disappointed when he was red-carded by Nigel Owens but his coaching team surely couldn’t argue with that challenge it truly was awful.

Argentina has not had the best of World Cups with their players struggling to emulate the heights of their 2015 campaign where they reached the Rugby World Cup semi-final.

What do you make of this hit on Farrell here, was it correct to be given a red card?

England will be hoping that Farrell doesn’t get injured in these games, it’s fair to say that England are pinning their World Cup hopes on the likes of Owen Farrell and Billy Vunipola, and shots like these on their players will give their players nothing but anxiety.

England centre Piers Francis escaped sanction last week with a similar hit against the USA. Players will be unhappy to see that lack of consistency when it comes to managing the tackle area.

Look at this image below, do you think it’s just a convenient choice of photo or are England lucky to not be cited here? Rugby Onslaught, of course, does not condone big hits like this, but there does come a point where you have to wonder where do players go if a player dips just before the contact.

All everyone wants is consistency!