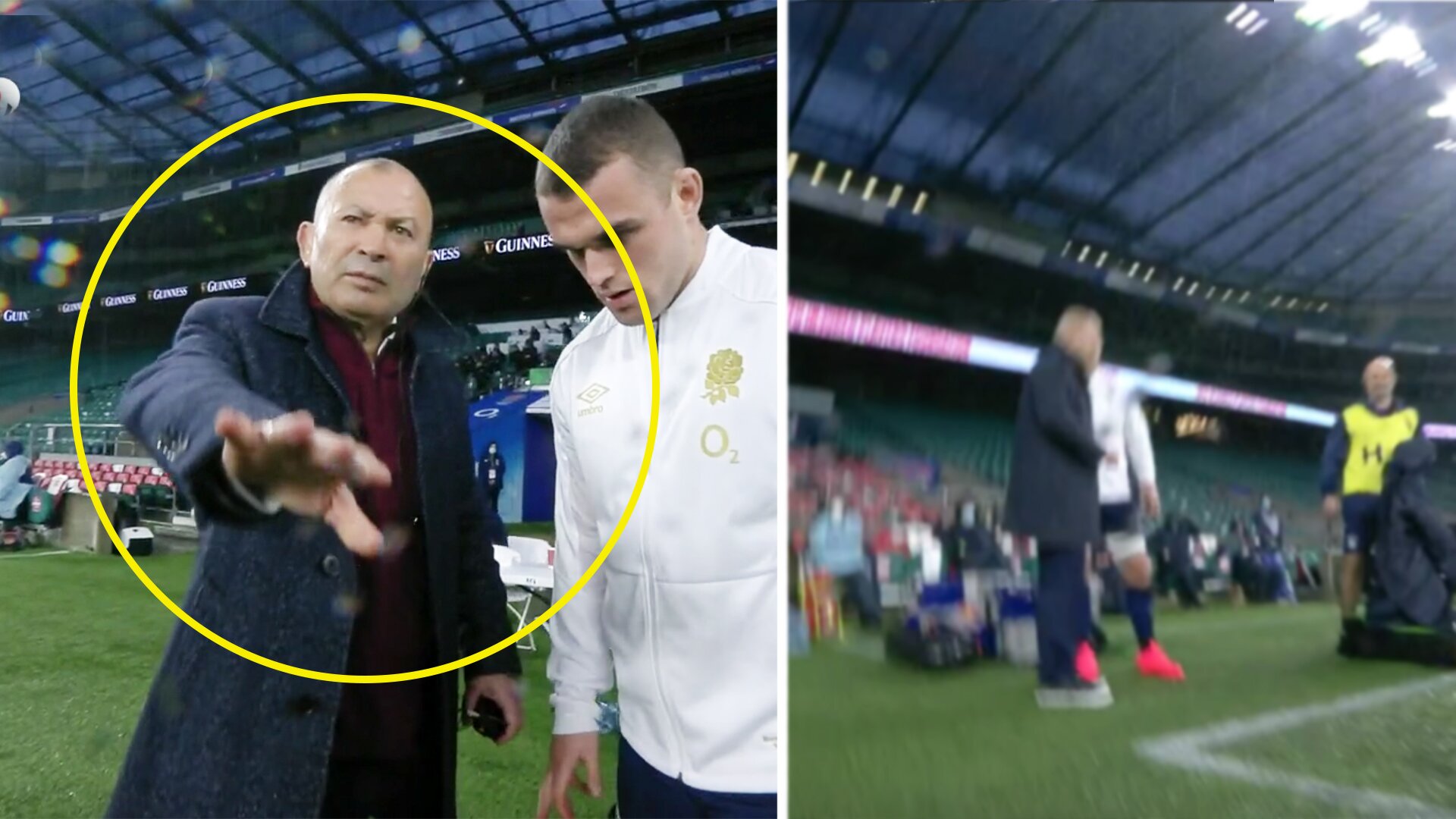 Eddie Jones was involved in a bizarre touchline altercation in today’s Autumn Nations Cup clash between England and Georgia as many of our followers have just pointed out to us.

In a blink or you’ll miss it moment, we see as Eddie Jones prepares to bring on Bristol star, Ben Earls, in the second half of the encounter at Twickenham.

We see as the Amazon Prime cameraman looks to get a close up of the pair for the viewers at home. Eddie Jones had other ideas.

We see as Jones briefs Earls on the sideline as he looks to bring on his finishers as the second half wears on.

With England holding a 26-0 lead, we watch as Jones is giving detailed instructions to the young flanker. As the technical assistant moves in closer to the Australian coach – you can see that Jones is less than pleased about the invasion of his personal space.

Watch the bizarre touchline altercation below.

If you needed any more proof that Eddie Jones is a Sith lord – this is the it!

All Blacks star Ardie Savea will be looking for a different reception from New Zealand Rugby this week, after finally opting to wear a mouthguard.

Savea was spotted without the protective equipment during New Zealand’s 24-22 defeat to the Wallabies in Brisbane last weekend, less than a month after he was condemned by NZR for not wearing a mouthguard during Bledisloe Cup II at Eden Park.

The 47-test loose forward broke the NZR players’ collective agreement, whereby players have agreed “to wear a mouthguard in the course of playing” under section 53 of the 2019-2020 document.

But it’s a different story tonight, with Savea wearing the protective equipment during the All Blacks’ Tri Nations game against Argentina.

In 2013, Savea and Wellington teammate Tomasi Palu was sent from the field by referee Nick Briant to retrieve a mouthguard after they were caught without one during a match against Canterbury.

Then aged 19, Savea was unaware mouthguards were compulsory and promised to wear one after having stopped doing so due to breathing difficulties.

“I feel like I need to wear one now,” he said after he was given his marching orders seven years ago.

“I know the refs are going to start enforcing it from now on, so I will be getting one fitted ASAP.

“That was bad on my behalf. It is a good thing they are cracking down and forcing the players to wear one. It is not a good example for young players to follow.”

Savea was criticised three years later after he and five other teammates – Ben Smith, Malakai Fekitoa, Waisake Naholo, Dane Coles and Tawera Kerr-Barlow – were seen not wearing mouthguards while playing for the All Blacks against Wales.

Just a fortnight after that, Savea, Coles and Vaea Fifita were all spotted without the protective equipment while playing for the Hurricanes against the Blues.