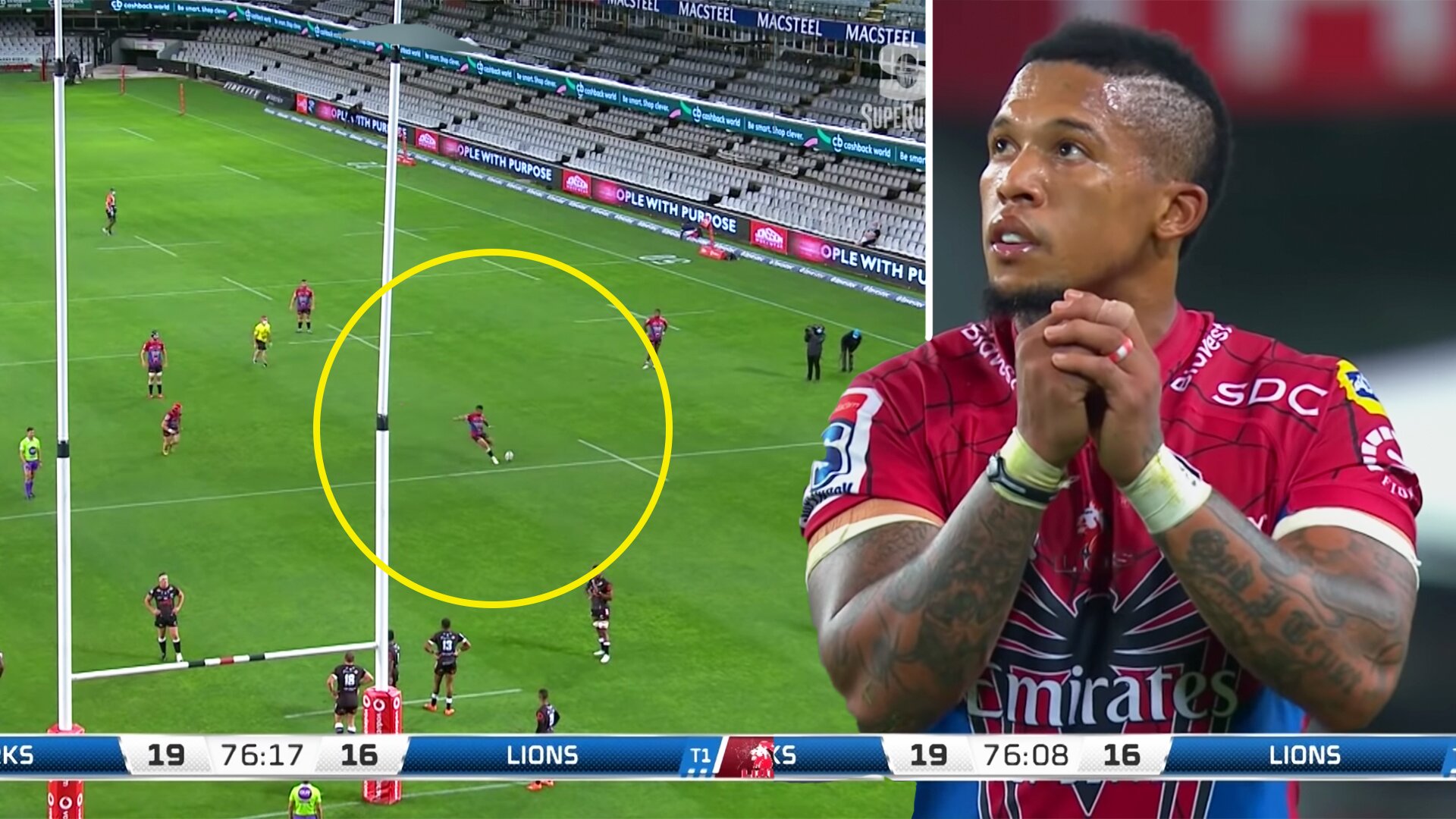 Elton Jantjies grabbed headlines in last night’s Super Rugby Unlocked showdown between the Sharks and the Lions in Durban.

Both sides saw a number of players back from last weekend’s Green vs Gold match which pitted a number of domestic Springbok stars against each other.

Last night’s encounter was a close-run affair with the match coming down to one crucial kick inside the final five minutes for the Lions to level up the match.

The match had been a well-fought contest between the boot of the experienced Elton Jantjies and the up and coming Curwin Bosch for the Sharks.

21-year-old Sharks fly-half Bosch had many calling for him to have a shot at ten for the Springboks with some brilliant play with the boot throughout Friday night’s clash.

Elton Jantjies also had a strong match with this crossfield kick demonstrating that he was still in the conversation for the ten jersey for the Springboks.

Brilliant from Elton Jantjies who takes a quick penalty and puts in a pinpoint cross-kick for Jamba Ulengo to score. The Cell C Sharks lead 19-16 with seven minutes to go.

Unfortunately for Jantjies, last night’s performance will be overshadowed by a horror miss in the closing stages of the match that in the end proved to be the deciding moment.

This seemingly simple kick right in from of the posts would have levelled the scores at 19-19 and given the Lions one last chance to go for the win in the Super Rugby Unlocked clash.

Watch the awful penalty miss below

Instead, Jantjies kick bounced off the upright – allowing the Sharks to regain possession and to see the match out for a 19-16 victory.

Exeter and Bath have named their teams for Saturday’s Gallagher Premiership semi-final at Sandy Park. For the Chiefs, Olly Woodburn comes in on the wing for Jack Nowell, who misses out with a foot injury. Ollie Devoto, another former Bath player, replaces Ian Whitten in the centre and up front, South African Jacques Vermeulen returns to the fold in place of Sam Skinner, who drops to the bench.

“It’s going to be a huge challenge and we’re going to have put in a season’s best performance,” said Exeter boss Rob Baxter. “We’re at the semi-final stage of the competition, the top four sides in the division, so you should be preparing for a huge test.

“Bath will be tough opponents. Although we beat them here earlier in the season, that will count for nothing this weekend. They are one of the form sides since lockdown and when you watch them play, they look like they are a side enjoying their rugby. As a coach, I always worry when I see a side enjoying themselves because that normally means they are playing well.”

Bath Rugby make three changes as they prepare for a first semi-final since 2015 with the Blue, Black and White facing Exeter Chiefs at Sandy Park on Saturday.#WeAreBath | #EXEvBAT

Fresh from last Sunday’s draw at Saracens, Bath have made three changes for the trip to Devon after having their semi-final place confirmed by Sale forfeiting their match with Worcester.

Joe Cokanasiga will make his first start for Bath after 16 months following a knee injury.  Cameron Redpath moves into midfield to join Jonathan Joseph and the young England centre replaces Josh Matavesi, who is named on the bench.