An investigation has just been opened into England Rugby and the RFU after a bizarre training ground incident at Hensol Castle yesterday.

Welsh players who had been preparing for this weekend’s crunch tie with Scotland were alarmed when a swan appeared adjacent to the team’s pitch but all was not as it seemed.

It wasn’t a real swan!

Rugby Onslaught understands that the Welsh players suspected something wasn’t right when a sliced Dan Biggar conversation bounced off the pitch and directly towards the stationary swan.

On realising the lack of movement from the bird, the players then went to investigate – only to realise that it was, in fact, a robotic device.

The suspect swan was immediately taken within the grounds of the Vale Resort where staff investigated the fake bird in which a recording device was found, as well as a state of the art walking mechanism that allowed the swan to travel unaided, out of the thicket and onto the training ground pitches.

A member of the Welsh staff had this to say,

‘We were all obviously gobsmacked, Dan had sliced one off the park and it went right for the Swan – we thought it would  fly away but the thing just fell over!’ he went on to add, ‘we brought it inside and took it apart and we couldn’t believe it when we saw the camera – it was like something out of science fiction, there’s only one country that could afford all of this.’

It’s understood that the Welsh camp had their suspicions around the suspect swan despite their clash with England not being scheduled for another two weeks.

Things escalated later on in the day however after authorities were called at around 15.50pm to reports of a man acting suspiciously outside the Vale Resort grounds. A man was found at the perimeter fence of the complex and was spoken to. 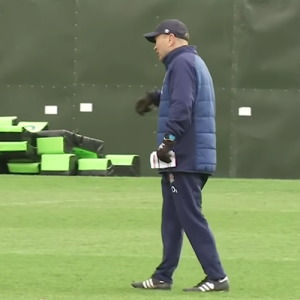 Officers conducted routine checks which were all above board. No damage to the fence was found after the man was stopped outside the grounds of the resort. No arrest was made and he was sent on his way.

A description of the man has been released to the media which details a 5ft2in male in his late 50’s/early 60’s with an Australian accent. No formal identification of the man could take place.

England Rugby are now set to be investigated in relation to the incident but the WRU have reportedly not ruled out foul play from the FFR or SRU.

We will give you more on this fast-moving story as it develops.