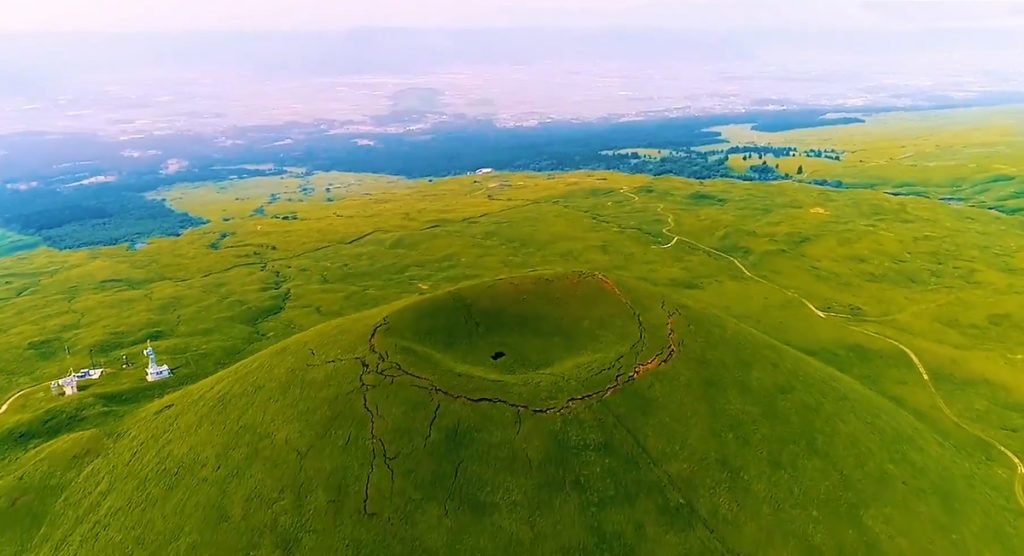 Kumamoto is the capital city of Kumamoto Prefecture on the island of Kyushu, Japan. Famous in Japan for it’s iconic ‘Kumamon’ character, a black bear with red cheeks, Kumamoto has many surprises for tourists ranging from historical landmarks to beautiful landscapes where a world of adventure awaits.

A place where the contrast of nature is fierce with amazing views from mountain tops and rugged land on this geothermal site. Get the adrenaline pumping with mountain biking, parachuting or horse riding on the grasslands or just enjoy the scenery with a gentle hike where cattle graze in front of the Mt. Nakadake volcano.

–  Visiting one of the world’s largest craters in Mt. Aso and a great viewpoint of Kusasenri. About one hour from Kumamoto city. you can meet dolphins with a high probability of 98%. A boat trip that women and children can enjoy with peace of mind. You can see wild dolphins as you explore the islands of Amakusa, and swim with the cruiser to make them look lovely.

-Around 1.5 hours from Kumamoto Station to Amakusa.

Located in Oguni Town, Aso District on the border between Kumamoto and Oita Prefectures is the fabulous Nabegataki falls, a 10-metre high and 20-metre wide waterfall.

A short walk through the forest down a guided pathway will take you to the falls from the car park. The beautiful waterfall has many angles to admire from, including from behind the fall inside the cave.

The only way to get to Nabegataki is by car or taxi. The city’s most famous landmark is Kumamoto Castle, a large and, in its day, extremely well fortified Japanese castle. It is considered one of the three premier castles in Japan, dating back to 1607 and was in use until 1874. Restoration on the castle is expected to be complete by 2019 after suffering Earthquake damage. Explore the vast grounds around the castle separated by moat. The Kato Shrine, sitting in the grounds outside the Kumamoto Castle, is where Kato Kiyomasa, a powerful lord of Kumamoto in the late-16th and early 17th centuries, is enshrined. The Shrine is one of the best places to view the main tower of the Castle. Sakuranobaba Johsaien is a Japanese tourism facility located next to Kumamoto Castle comprising of a mix of shops, restaurants and tourist exhibits. Grab a bite to eat on the way to the Kumamoto Castle or enjoy one of the regular Samurai shows in the square. Suizenji Garden is a spacious, Japanese style landscape garden in Kumamoto, best enjoyed by strolling along a circular path surrounded by a peaceful pond. The pond was said to be great for producing green tea, so a purpose-built teahouse was built overlooking the Garden and was used by Lord Hosokawa Tadatoshi himself.

Visitors can experience ‘the best view in the Garden’ by sipping delicious green tea accompanied by a traditional sweet in the private teahouse by booking a seat. The southern most city of Kyushu, Kagoshima, can be reached from Kumamoto by Shinkansen (bullet train). Operated by JR Kryushu, the Mizuho train is the fastest way to get there less than one hour, with no stops from Kumamoto to Kagashima station (Kagoshima-Chuo). The Sakura train can also be used which has more stops along the way.

Sengan-en Garden is a Japanese-style garden on the north coast of downtown Kagoshima. From the garden, Kagoshima Bay is visible as is the volcano island of Sakurajima sitting off shore.

Sengan-en was built by one of the most power feudal clans during the Edo Period (1603-1867), the Shimazu Clan. In the centre of the gardens, the ‘Iso residence’ is the former home of the Shimazu family, which can be explored by visitors. The rooms have been preserved the way they were used in the 1890s and will take you back in time for a historical experience.

Located next to the Sakurajima Ferry terminal is the Io World Kagoshima Aquarium. An underwater world awaits to see all of the sea creatures found in the local Kagoshima Bay and much more.

A kagura dancing extravaganza, with performances by a variety of troupes throughout the whole of each day.

Stalls sell food and sake for you to enjoy while you take in the incredible performances.
(700 per person of high-school age and over)

The Namino area of Aso City has a flourishing kagura dance scene. In this festival, a variety of troupes come together to show their moves on an open-air stage at Michi-no-Eki Namino Kaguraen Roadside Station. Some troupes even let you dance with them! When night falls, the performances get even more dramatic, with flaming torches lighting the stage.

Beginning early in the morning on the festival day, over 1,500 participants tie 365 individual ropes together and spend half of the day weaving them into a single, giant rope. The main rope weighs 7 tons and is 365 meters long. Nearly 3,000 bare-chested men drag the rope in unison. The so-called oshitai (pushing squad) obstructs the opponent’s team by aggressively
ramming into it.

The whole of Yomitan Village comes together to put together the events of this festival, including the Akainko Grand Concert of Traditional Ryukyu Music, a concert named after a legendary figure in Ryukyu music and performed by over 300 local Ryukyu dancers and fans of traditional music, Uketsugo Yomitan no Kokoro (“Let’s Pass On the Heart of Yomitan”), a huge concert performed by local elementary and junior high school students and Shinkosen, a recreation of the ship said to have brought prosperity to the Ryukyu kingdom created with folk crafts by each residents’ association.

A tour of the beer factory is also popular. Click here for details.