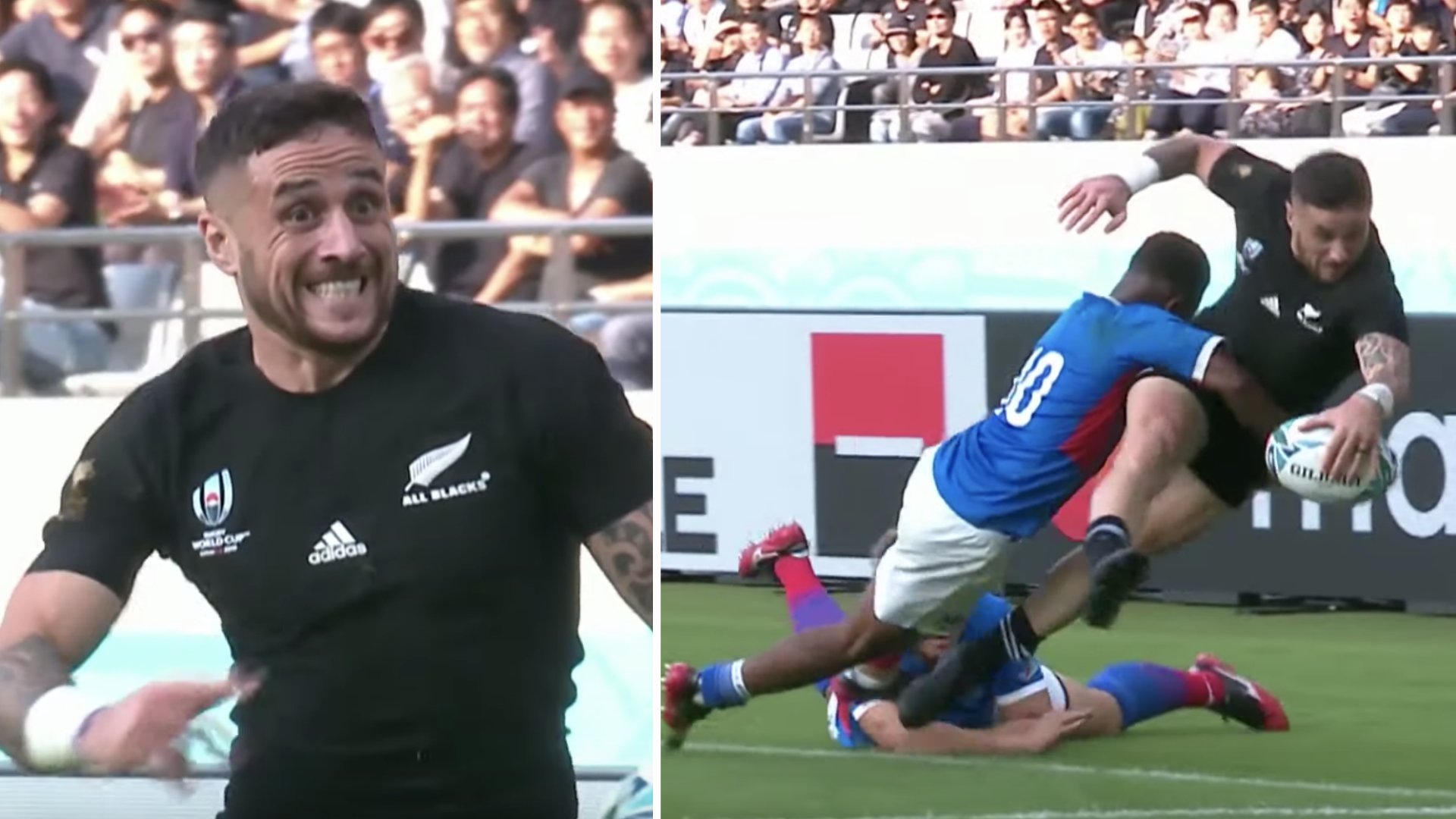 So the All Blacks have scored the try of the tournament

What a try this was from New Zealand, this has to be the score of the tournament. The All Blacks put Namibia to the sword in this match, in a game that everybody knew the result of even before the first whistle.

Even so, the quality of rugby on show from New Zealand was top tier, even we can admit that. The men in black are heading to another quarter-final where they will take on either Ireland, Scotland or Japan.

This try was truly something special and we believe that it should be a contender for try of the tournament. With less than 10 minutes left on the clock, the All Blacks came rampaging down the left win with some superb handling to outclass Namibia.

TJ Perenara was on hang to dot the ball down in the end and the try was brilliantly executed.

Try. Of. The. Tournament.
The offloads, the footwork, the finish.
Flat out ridiculous#NZLvNAM

Try of the tournament so far goes to the uso @Tj_Perenara

Try of the tournament sorted!!! #nzlvsnam

Try of the tournament by @Tj_Perenara. That was special bro!!

Everyone was pretty unanimous that this was a special try that deserved to be given that special status of try of the tournament. How did they even manage to get that offload away, in a tournament where handling has been difficult to perfect, this was special.

TJ Perenara always seems to find himself in the right place doesn’t he.

We’re going to show you two angles of this try. Look at the handling for this try here. Try of the tournament for you?

Here’s the other angle…

The Springboks have made 13 changes to their starting XV for Tuesday’s match against Canada in Kobe to manage the four-day turnaround between their final two Rugby World Cup pool matches.

Captain Siya Kolisi and centre Damian de Allende reappear for a second successive start while five of the replacements from the victory over Italy (49-3) on Friday are promoted to the starting line-up. They are Frans Steyn (centre), Francois Louw (looseforward), Franco Mostert and RG Snyman (both locks) and Vincent Koch (prop).

Nine of the team that defeated Namibia 57-3 in City of Toyota in the preceding match regain a starting place while Damian Willemse – who arrived as an injury replacement from the UK on Thursday – goes straight into the starting line-up at fullback.

There are also first starts at the Rugby World Cup for Thomas du Toit (prop) and Cobus Reinach (scrumhalf).

A win with a bonus point would almost certainly secure a place in the quarterfinals for the Springboks.

“A four-day turnaround between Tests is a challenge but we had planned for it and will be well prepared,” said Rassie Erasmus, South Africa’s director of rugby.

“This match is just as important as the three that we have already played – it has the same number of log points available and the same impact on our chances of qualifying and we have to now complete the job.

“There are a number of new combinations in our team, but we have been together for several weeks now and everyone understands our gameplan and strategies. The nice thing is that at the end of the match every member of the squad will have started a Rugby World Cup match.

“But the first thing we have to focus on is winning the match and securing a place in the quarter-finals.”

There are a number of positional changes in the backline, with Sbu Nkosi switching to the left wing, Warrick Gelant starting on the right flank and De Allende being given a start at outside centre.

The versatile Du Toit starts at loosehead prop, while Louw is at No 8 with Schalk Brits returning to his more usual No 2 jersey after appearing at the back of the scrum against Namibia.

Rested completely from the squad that played Italy are Tendai Mtawarira (prop), Bongi Mbonambi (hooker), Lukhanyo Am (centre) and Cheslin Kolbe and Makazole Mapimpi (wings) – who had featured in all four matches in Japan – as well as Lood de Jager, Duane Vermeulen and Faf de Klerk.

“Our preparations for the match have been shortened by the turnaround time but we are giving Canada the same attention we applied in the three previous matches,” said Erasmus.

The match kicks off at 12h15 (SA time) and is available on SuperSport channel 201 or SABC radio.

The Springbok team to play Canada in Kobe on Tuesday is: