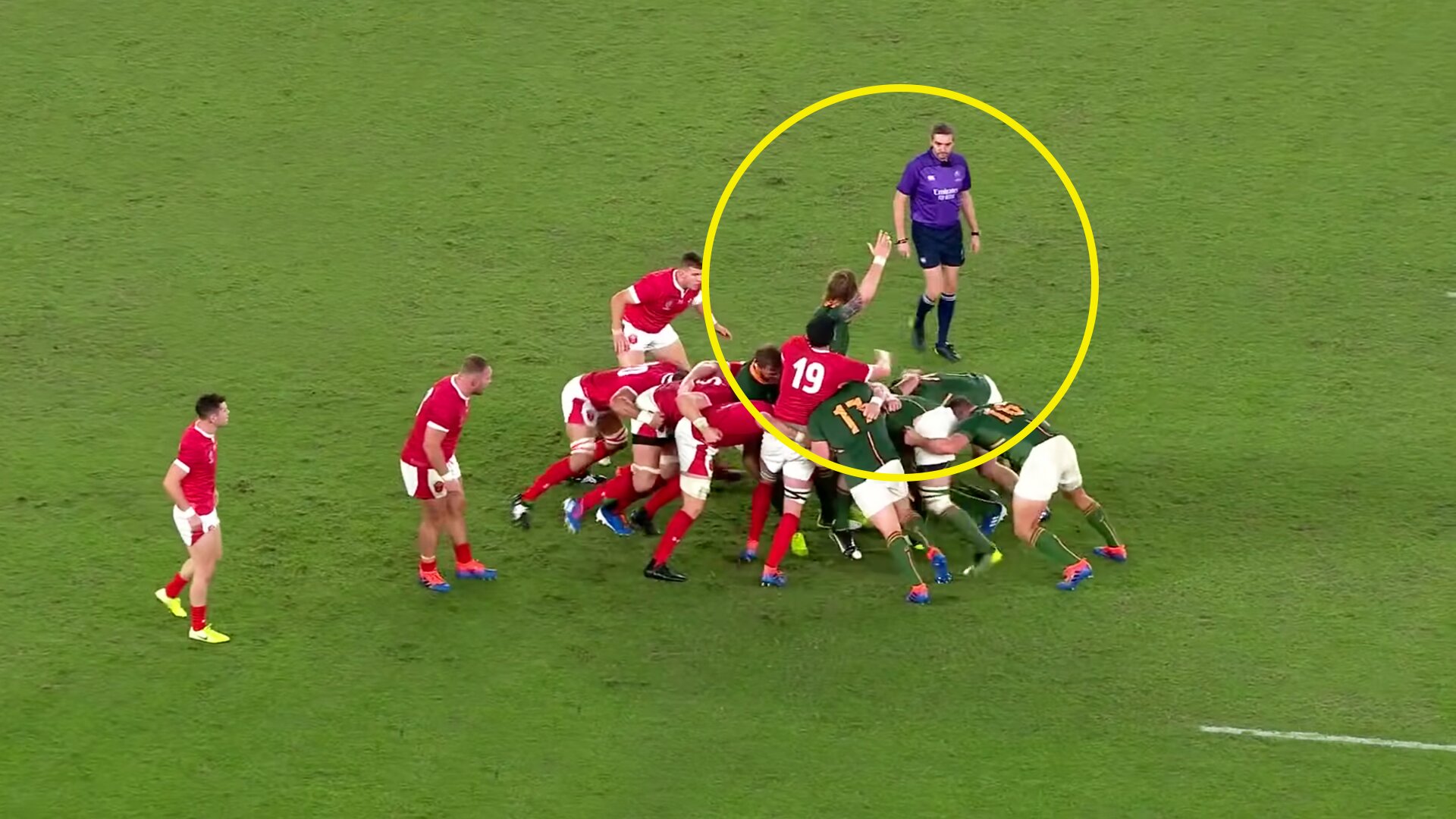 The inquest into the South Africa World Cup win last year took another tumultuous turn this week as further shocking evidence emerged of collusion between the Springboks and Rugby World Cup officials.

Calls have been mounting for the side to be stripped of their controversial Webb Ellis Cup win in light of other shocking evidence that has emerged including ‘Unseen footages proves Rugby World Cup officials were in on helping the Springboks win‘ and ‘Mounting calls for South Africa to be stripped of World Cup win after undeniable evidence emerges showing officials helping Springboks‘.

The new footage that has been unearthed by the Rugby Onslaught investigation unit is perhaps the most shocking finding from this inquest, again, featuring World Cup referee – Jérôme Garcès.

This time, it was against Wales, in their 19-16 victory over the reigning European champions.

We see as this shocking moment comes from arguably the most pivotal point in the Springboks campaign – with the scores locked at 16-16 in the last five minutes of their semi-final.

South Africa get the lineout from 35m out and set up a rolling maul. That’s when we spotted the first shocking piece of evidence. We see as the Springboks start a slow non-threatening march on the Welsh that had little in it in way of go-forward. Then, we watch as lock, RG Snyman gives a trigger call to Garcès informing him that they’re ready to have the penalty awarded. We were confused as at first, the French referee didn’t obey the command to award the penalty – with Snyman’s arm still outstretched as if to say. ‘have you forgotten our arrangement Jérôme?’.

Then, we see as the Springboks take matters into their own hands with Duane Vermeulen deliberately throwing himself to the floor before rolling back into the path of the rolling maul to force Welsh players to trip over him.

Again, this failed, so the South African players took it further and pulled down their own maul with next to no involvement of the Welsh players.

We see a forlorn look on the French referee’s face immediately after the penalty award. Perhaps a mixture of shame and regret mixed with fear at having momentarily defied the instructions of the Springbok players.

South Africa won the match off of the resulting penalty.

This is just the tip of the iceberg as our investigators found numerous examples of these trigger calls being used on referees on their payroll to gain favourable calls throughout the tournament.

No side has ever been stripped of a Rugby World Cup but this is currently the largest discussion in the sport with many feeling that their position as World Champions is untenable in light of the damning evidence that has been building in the weeks and months since their controversial tournament win.

Rugby Onslaught’s pioneering investigational work into the Springboks sham World Cup win was vindicated last month as the truth started to spread around the rugby community with other major outlets reporting this story, “South Africa ‘flattered referee Jerome Garces over his physique’ to get favourable decisions to help them beat England in the Rugby World Cup final… after extensive research into the French ref’s mannerisms.”

He followed it up by shouting “I BLOODY LOVE SOUTH AFRICA!”

Bang out of order, IMHO. pic.twitter.com/5R5j4r7R2a

Since RO’s investigational correspondents were chased out of South Africa last month they have carried on with their good work from secure undisclosed locations despite worrying for their own safety to bring us this groundbreaking new story.

Our journalists have refused to give in despite the threats against themselves and their families and they have given us their assurances that they will go on until justice is done.