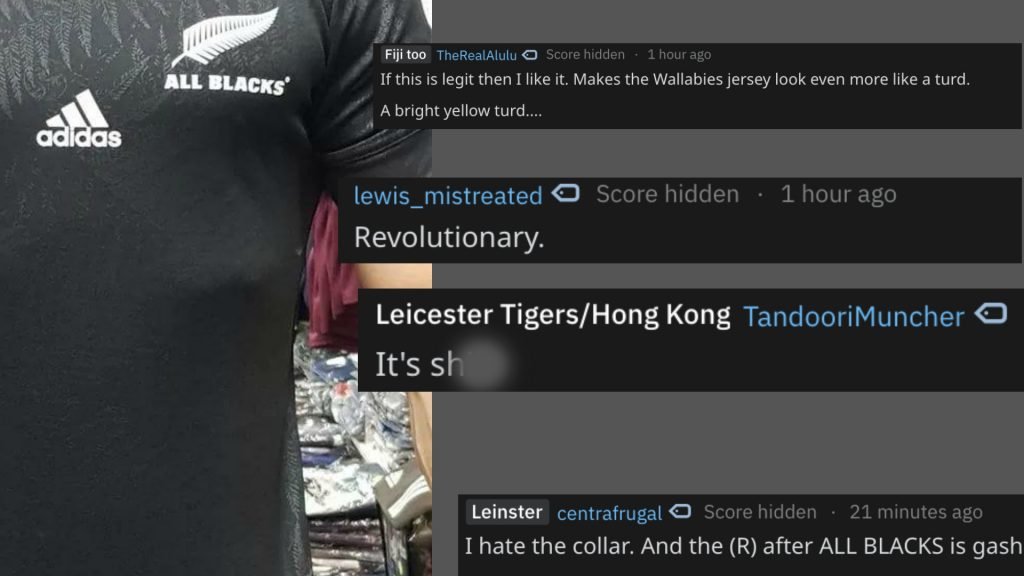 The All Blacks World Cup jersey appears to have been leaked, and the Internet doesn’t know what to make of it

It appears around an hour ago that someone has leaked to design for New Zealand’s Rugby World Cup jersey in Japan. A user on the popular site Reddit called “blaynis” posted the photo at 8am BST with the caption, “Leaked All Blacks 2019 World Cup Jersey”.

The All Blacks, despite only having a black design, draw in a lot of interest in the slight changes that they add to their World Cup shirts. As you can see below in the contrast with their 2003 and 2011 jerseys, the difference is slight, but enough to to get people talking about their kit. Changes as small as an added collar to a jersey are enough to spark outrage among the All Black rugby community so you can see why it can be a touchy subject amongst rugby fans.

The photo that was leaked today appears to have been taken in some sort of stock room or changing room as lots of other shirts appear to be in plastic bags on the floor in the background of the image.

The image itself has drawn plenty of criticism with many fans claiming that the shirt looks more like a training shirt than an actual rugby jersey. The shirt drew mixed reviews on Reddit with some fans liking the design saying that the shirt was ‘revolutionary’. However, other commenters on the side appeared to be less pleased. One user seemed to prefer a more simplistic style.

Here are some comments from users about the shirt:

“I like it, especially since it doesn’t have the annoying Adidas stripes on the shoulders.”

“I hate the collar. And the (R) after ALL BLACKS is gash. Why isn’t the country or union name included?”

“Fake news ,its mostly black not all.”

“I love it. So glad they’re not sticking with the weird armour panel thing they’re doing at the moment.”

The shirt is always likely to draw in comments, but this is an interesting discussion to say the least.