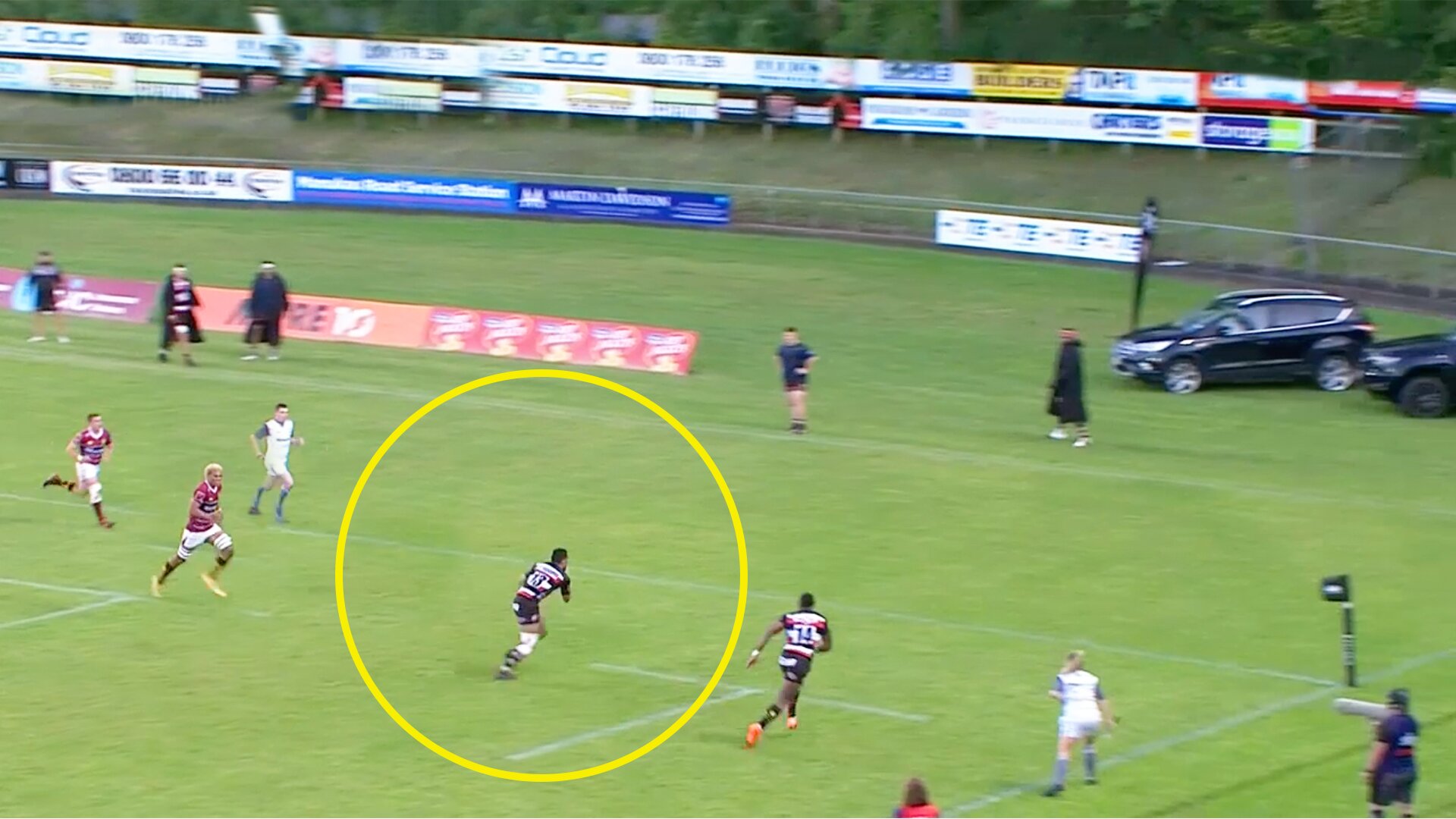 Fans were left baffled and perplexed in this morning’s Counties vs Southland matchup in the Mitre 10 Cup after this bizarre attempt to score a try in the game’s first half.

The moment occurred in the 32nd minute of the game with the scores still standing at 0-0.

This has to go down as the perfect example of how NOT to score a try and after multiple viewings of this – we have to ask ourselves – what was he thinking?!

We watch in this Mitre 10 footage as Counties do some great build-up work in the lead up to the moment in question.

They build multiple phases of play close to the Southland line and on the 11th phase, we see as they have a huge two-man. overlap on the outside.

The ball goes out the Counties 13, Sione Molia, who seemingly only has to run in and score.

What follows is bizarre to say the least. Watch the new Mitre 1o Cup moment in the link below.

Oh, that’s close! Sione Molia has made this one tougher than it should be but the try stands in Pukekohe.

This week’s training camp could be the last of the year for some members of the All Blacks squad, with coach Ian Foster indicating the team’s plan to send players home.

There are two tests left on the All Blacks calendar for the 2020 season, closing out the Tri Nations with matches against Argentina this weekend and in a fortnight, with a bye separating them.

The All Blacks took a squad of 36 across the Tasman for the four-test tour, so there is room to send players home early should they choose to.

“We’re looking at the potential choice of maybe sending a few players home earlier, maybe early next week,” Foster confirmed. “Once we get through this game and actually give people the chance to have a bigger break before Super Rugby and with the size of the squad we’ve got.

“It’s always been our plan with the squad that we’ve got, if we had an opportunity to without injuries. If we didn’t have a lot of injuries then there was a chance that we could send a small number back a week or 10 days earlier so they could commence their quarantining and have a bigger break. We’ve still got Super Rugby starting at the end of February and we’re very cognizant of that.”

Foster didn’t indicate who the team might look to send home outside of prop Ofa Tuungafasi who is suspended for three games after being shown a red card in last weekend’s loss to the Wallabies.

However, the decision to send players home, or which players will be offered the chance to go home early, could be dependent on how the side performs against the Pumas on Saturday night.

Foster has named a strong outfit to take on the Argentinians in their first test of the year, with Richie Mo’unga, Aaron Smith, Joe Moody, Patrick Tuipulotu and Jack Goodhue all returning to the starting side after missing last week’s outing.

Scott Barrett, TJ Perenara and Karl Tu’inukuafe were the key exclusions from this weekend’s side, while test rookies Will Jordan, Cullen Grace, Asafo Aumua and Akira Ioane all missed out on a spot as well.

Smith, who had to watch one of the more chaotic tests in recent memory unfold from the sidelines, said those selected we focused on turning around that defeat at the hands of the Wallabies.

When asked if any players had put their hand up to volunteer to come home early, Smith said it wasn’t something the playing group had given much thought to.

“We’re pretty focused on what we’ve got to do,” he said.

“We’re all here preparing to play and if you get that conversation mentioned to you, I guess you go down that road – but that’s next week. Especially after the game we had in the weekend, all our focus is on Argentina on Saturday, trying to play a brand of rugby we’re proud of, and put it right.

“You can get lost in the energy around what ifs and could bes…you’re not doing your job and adding to the environment and adding to our training. It would be a disservice to the jersey.”