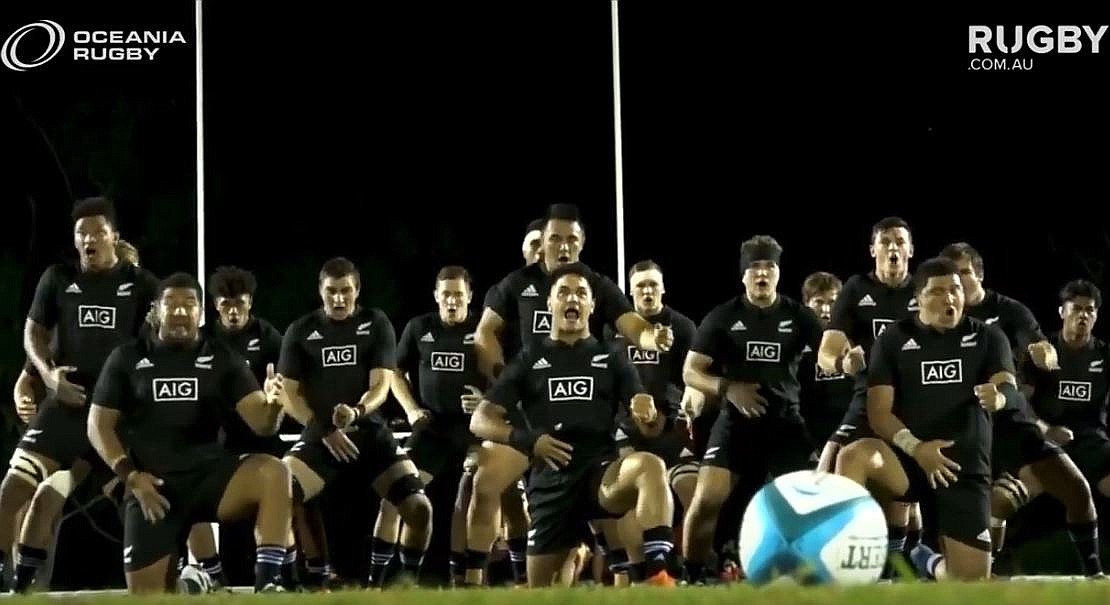 VIDEO: The look on this Junior Wallaby prop’s face as he faces the Haka is priceless

When you face the haka, most New Zealander expect you to be afraid and to turn your head away in shame at your own cowardice. The trick is not to do that, but to do what this bloke did. To smile and lick your lips.

The Junior Wallabies have won the Oceania U20s Championship for the first time leaving New Zealand scoreless 24-nil at Bond University on the Gold Coast on Saturday night.

In front of 2,136 strong crowd, the Junior Wallabies have finished their Oceania campaign on a high, remaining undefeated. It marks the second time in history that Australia has defeated the New Zealand U20s.

Australia’s Will Harris kicked 14 points at Bond University to secure the Junior Wallabies win adding to his championship total of 33.

Junior Wallabies Head Coach Jason Gilmore said: “We have prepped well for a good performance tonight and the boys delivered.

“The most pleasing aspect was to keep our opposition scoreless in our last two matches.

“Winning is a habit and we aimed to win this tournament which is a great effort.

“However, we can’t get carried away. The World Championship is the aim and we need to stay humble, keep working hard and enjoy what we do,” Gilmore said.

The Junior Wallabies now look ahead to the World Rugby U20s Championship in Argentina in June where they will face Italy, England and Ireland in Pool B.

In the earlier match of the day, Fiji took out their first win of the Championship defeating Junior Japan 57-39.

After staring down the Haka the Junior Wallabies were first to receive the ball in slippery conditions on the Gold Coast. The Junior Wallabies took to the scoreboard first with Will Harrison starting the match on a high and converting his first penalty of the night. After a fierce aerial battle, Australia yet again won the ball back of the visitors and Harrison continued his accuracy slotting the points to give the Junior Wallabies a 6-nil lead.

New Zealand would attempt to strike next following a Junior Wallabies penalty but New Zealand’s Fergus Blake missed the kick as Australia’s maintained the lead. A subsequent offensive from the All Blacks saw them succumb to the defensive wall of the Junior Wallabies, and a penalty to the men in Gold again saw Will Harrison continue his pinpoint accuracy extending the lead 9-nil.

A dominate Australian scum continued its form and allowed the team to retain the ball on their own line. The following penalty saw Harrison again opt for the kicking tee as he extended the Australian to 12-nil lead. A powerful Australian outfit continued to steal New Zealand ball, however the slippery conditions saw the Junior Wallabies turn the ball over with a penalty. However New Zealand’s Fergus Blake was again unsuccessful in adding the extras.

A powerful rolling maul from the New Zealand side followed and saw the Junior Wallabies defensive efforts put to the limit, with Will Harris issued with a yellow card to following a high tackle and the Australian’s heading into the sheds up 12-nil at halftime.

Following the kick off a powerful Junior Wallabies scrum saw star flyhalf Will Harrison regather the ball and kick it deep into New Zealand territory as the Junior Wallabies continued to apply the pressure. It was here that Noah Lolesio regathered the ball and put it up in the air, across the field and into the hands of Triston Reilly who would then cross over for Australia’s first try of the match, taking the Junior Wallabies to 17-nil at the midpoint of the second half.

A maul off the back of a lineout followed the restart and saw captain Fraser McReight crossing the line in what would be the last try of the match. Harrison again added the extras extending the Australian lead 24-nil.

It was at this point coach Gilmore called on the reinforcements with Pat Tafa, Esei Ha’angana and Bo Abra coming on to replace Will Harris, Trevor Hosea and Angus Bell. They had an immediate effect with Australia again overpowering a New Zealand maul to earn the lineout for themselves and again regaining the ball.