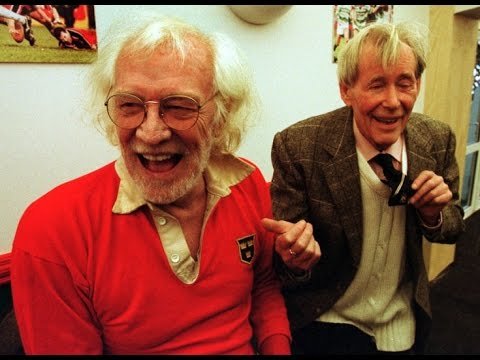 They may have been two of the most famous actors in movie history – but Richard Harris and Peter O’Toole were also massive rugby fans.

Harris, who starred as Dumbledore in Harry Potter and O’Toole who played Lawrence of Arabia, met up for drinks before the 2000 Heineken Cup final at Twickenham and entertained the fellow fans around them with hilarious stories from the past.

The pair had come to watch their beloved side Munster – face Northampton Saints in the showpiece final.

The video starts with Harris showing off the Munster jersey he wore for his single cap for Munster Schools against Connacht back in 1948.

He wore the playing top for this day out which, never washed, still had mud on it from fifty-two years previously!

The two Irish Hollywood megastars were clearly in great spirits as they shared stories with those around them.

At one point we see O’Toole take down his life long friend with a rugby tackle to hysterical laughter from all in the lounge around them.

Harris, who starred in the Oscar-winning Gladiator, went on to exclaim to O’Toole, ‘You tackle well! Could we use you? We’ll bring you on in the last five minutes’

Watch the incredible video below

We see the acting legends embrace each other as they sing together – with their own musical accompaniment!

The video ends in fantastic fashion as O’Toole realises the match is about to kick off  just as Harris was about to break off into another brilliant story.

We watch as the two men walk off towards the Twickenham stands with their arms over each other shoulders – as they go to see Northampton Saints face their beloved Munster.

This incredible video is going viral online all these years later and it’s clear to see why!

This is what rugby is all about.